Multiple Sculpture "Glu-Glu", created in 1968 55SP is launched in the space that opens to the public on 10 May and continues to the fair JustLX in Portugal

São Paulo, April 2018 – The 55SP launches on 10 May a limited edition of the iconic sculpture in glass and liquid with surfactant “Glu-Glu”, Amelia Toledo (1926-2017) created in the late 60, one of the most celebrated inventions of the artist.

The work hourglass or rattle format brings inside a sparkling liquid and when handled or shaken, form bubbles that change with each new interaction. The proposal of the artist was just creating this tactile relationship between body and work. The name is an onomatopoeia of the sound the water makes when moving from one sphere to the other. 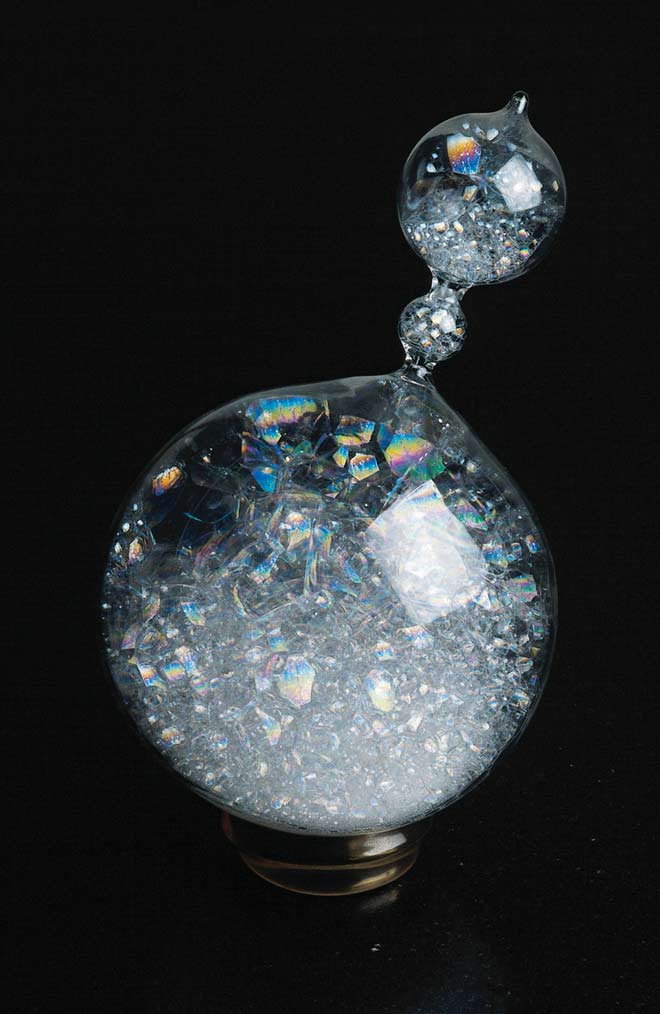 A obra “Glu-Glu“, supplementing today 50 years of existence was first shown in Rio de Janeiro in 1968 and has attended the Art Biennial of Sao Paulo and in other exhibitions around the world. The work was designed by Amelia Toledo to be a multiple wins and a certified and signed edition 50 copies.

55SP also will present the "Glu-Glu" in international art fair JustLX in Lisbon (Portugal), where the artist lived and taught at the Faculty of Fine Arts in the years 60.

The 55SP was invited by the curator of the first edition, focused on emerging contemporary art and takes place between 17 and 20 May gathering 43 galleries around the world.

Consecrated still alive, the work of Amelia Toledo is present in major private collections and museum collections of Brazil as the MASP, MAC USP , MAM- Rio and permanently exhibited works at the Pinacoteca and MAM SP. He passed away at 90 years in 2017, fifteen days after inaugurating his retrospective "I remembered that I forgot", in the Centro Cultural Banco do Brazil (CCBB) in São Paulo. The exhibition was awarded as the best show of the year in the country in 2017 the Brazilian Association of Art Critics (ABCA) and also by the APCA of Sao Paulo.

Amelia received important awards around the world and 2016 artist was honored at award Marcantonio Vilaca. Currently Amelia is highlight of the exhibition Radical Women, which has passed the Hammer Museum, which is open at the Brooklyn Museum of New York and arrive in the second half to the Pinacoteca de São Paulo.

Amelia was a painter, designer, sculptor and label, It was also designer jewelry and teacher. His work can be conferred on ameliatoledo.com

Created to spread the contemporary art, the 55SP has fueled the new collecting and buyer's relationship to art and artistic production. In addition to working publicizing new artists, bet on consolidated market names, producing, with the support Trustees, limited and exclusive editions of works.

The 55SP held his latest projects in galleries and independent cultural spaces, as the Red Gallery and Tijuana, Casanova Art and Culture,Plataforma91, Cartel011, Pair. In his new space, next to the gallery Pilar, the 55SP features musical performances, Art book launches, courses and talks with artists and guests.

Previous: “The 5 Feng Shui elements and how to apply them at home” by Jessica Tan
Next: The art with the face of Brazil by Rosangela Vig