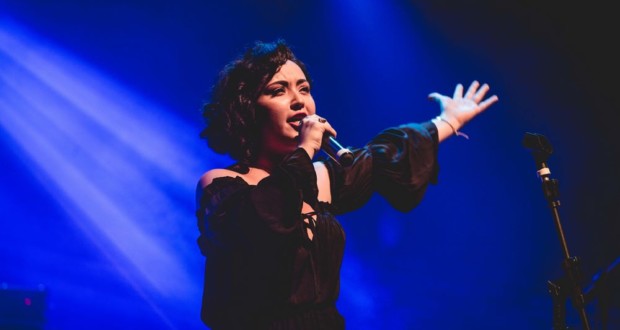 Ten candidates perform live at the Alliance Française Tijuca, open to the public event, day 10 October, às 19h30 and compete for spot in title game, which will award first place with trip to Paris with a companion

The 12th edition of the French Alliance Song Festival, national music contest sponsored by Aliança Francesa, in partnership with Air France and the Club Med reaches the semifinal round with the selection of 10 (ten) candidates of Rio de Janeiro, that will dispute a place in the Grand Final in Porto Alegre, day 30 November. The result of this step was announced on 24 September, through the French Rio de Janeiro Alliance website (www.festivaldacancaoaf.com.br).

Meet the selected of Rio de Janeiro who will perform live on Thursday, day 10 October, às 19h30, in the Auditorium of the Alliance Française da Tijuca - Andrade Neves Street, 315 -Tijuca (near the subway station Uruguay). The event is free to the public and passwords will be distributed 1 hour before the site.

After Claudia / From now on, Charles Aznavour / Georges Garvarentz

Flavia Melo / As usual, of Lace from the Stromae

Created in Porto Alegre 2008 on the initiative of the French Alliance of Porto Alegre, the festival has become a reference in the development and promotion of French-speaking contemporary music in Brazil. Each year applicants from all over the country, amateurs and professionals alike, interpret songs in French and compete for the top prize at the festival: a trip for two to Paris.

Adopted by the network of French Alliances throughout Brazil, the Festival has regional semifinals and a grand final based in a different city every year. This year the final stage with the presentation of the finalists and award ceremony will take place on 30 November, in Porto Alegre.

The festival is divided into three stages:

1nd Stage (round and qualifying): evaluation of the material of valid entries;

2nd Stage (round and qualifying): face regional phase (semifinal) with presentation of the music scene and selection for national stage (final). This step will take place in the French Alliances of Aracaju, Belo Horizonte, Curitiba, Porto Alegre, Rio de Janeiro and São Paulo. In each region, a candidate will be selected for the final.

3nd Stage (round and qualifying): national phase (final) presential, with presentation of the music scene, which this year, will take place in Porto Alegre, on 30 November.

To participate, candidates must be Brazilian and over 18 years. Registration is free and the choice of the song is free. The selection will be based on the items tuning, pace, pronunciation and interpretation and will be valued original and contemporary proposals of the vast repertoire of Francophone music.

The competition is open to applicants from all over the country, amateurs and professionals alike, interpreting songs in French and compete for the top prize at the festival: a trip for two to Paris.

They will be awarded the top three in the 2nd Stage of the Festival. The awards will be selected by each organizing AF Step Regional.

Participation in the National Final in Porto Alegre, hotel and flight borne by the festival organization. In addition to a lunch or dinner for two in the restaurant chosen by the organization, no maximum value 500 (five hundred) reais.

A dinner or lunch for two people in the organization chosen restaurant, no maximum value 300 (three hundred) reais.

1th place: 2 round-trip tickets to and from Paris (Air France) out of Rio de Janeiro or São Paulo + 6 nights in Paris;

The Festival, which will take place in seven cities in Brazil, It aims not only to spread the French music that exists in common sense, but explore contemporary diversity with different rhythms. With this, the event also aims to extend its reach, attracting a large audience not only for applications but also to enjoy the Festival.

Check the regulations of the French Alliance Song Festival 2019, available on the website www.festivaldacancaoaf.com.br

The National French Song Festival Final 2018 It took place on 7 th November of 2018, in São Paulo.

The ceremony was attended by the eight winners of the regional stages:

On the French Song

Impossible not to know a classic French song, La Vie En Rose, La Bohème, Do not leave me… There are many songs in French world famous, but did you know that the tradition of chanson is older than we think?

The term began to be used in the Middle Ages, to refer to secular music (not religious) Based on the corner. From the nineteenth century, the term chanson française has come to mean a specific musical genre that was defined, mainly, the appreciation of the French language, with allusions to the masters and inherited models of poetic literature in French. To tell the truth, the name "Francophone song" or "song in French" would be more appropriate, because the chanson française found voice in several French-speaking countries, and not just in France.

It was in the early twentieth century that the chanson française gained strength it has today, with the emergence of music icons such as Charles Trenet, Edith Piaf, Charles Aznavour, Jacques Brel… Over the years, the songs were reinventing itself, new rhythms were emerging, as well as new names: Sylvie Vartan, Dalida, Serge Gainsbourg, Françoise Hardy and many others. Nowadays, the French song is no longer limited to a single style or location: Canada Coeur de Pirate pianist Mali Amadou and Mariam double, passing by Belgium Stromae and back to France for Zaz, Angela e Louane. As the show their new icons, Francophone song is as plural as the cultures of diverse peoples united by the French language.

Check out the playlist in Spotify Festival to learn more of the diversity of francophone music: open.spotify.com/playlist/3f8fKqdETvuqNa2nFV6G36

In case of doubts, complaints or suggestions, contact by email: cultural@rioaliancafrancesa.com.br

Previous: Galeria Marcelo Guarnieri São Paulo – Sculptures of José Carlos Machado and Horizons Amelia Toledo
Next: In the week of children Villa-Lobos unites dance and drama to the sound of Camerata Antiqua