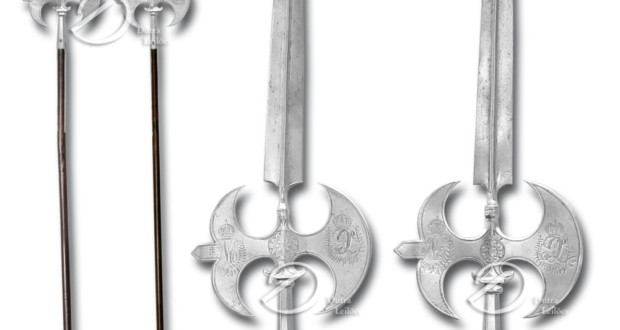 The Dutra Auctions, one of the largest houses of its kind in Brazil, with more than 30 years of experience in the market, promote an in-person auction with part of what belonged to the collection of the Brazilian Imperial House, which is Heloisa estate and Celso Figueiredo Filho and other principals (those who give sales order to an auctioneer, to negotiate their belongings in the market). The event takes place on 13, 14 and 15 March from 21 hours, Rua João Lourenço, 79 - Vila Nova Conceição - São Paulo - SP.

The set of available goods is wide and covers among other pieces, swords; halberds (kind of military ax); aquareladas lithographs of Debret and Rugendas; a multitude of pieces of porcelain that belonged to the various services of the Brazilian Emperors; collection orders, medals and decorations; plus silver jugs, keys, pendants, Tabaqueira, that were part of the Brazilian Imperial Family collection. There are also carvings, sculptures and dressers master Valetim; as well as images of wood by the sculptor Antonio Francisco Lisboa, Aleijadinho.

We can stand out, among several other:

Dishes offered by the Chinese Emperor Jia Qing-D. John VI to commemorate the creation of the UK, Portugal - Brazil and Algarve. They are rare;

halberts pair used during the period D. Pedro I. they were initially 20 weapons for Halberdiers the Imperial Palace. No period D. Pedro II were increased to 40. Very few known pieces, only a few museums have material;

three lithographs, aquareladas hand and time, representing the D coronations. John VI, D. Peter I and D. Pedro II. They are an accurate portrayal and an authentic witness of Brazilian history; 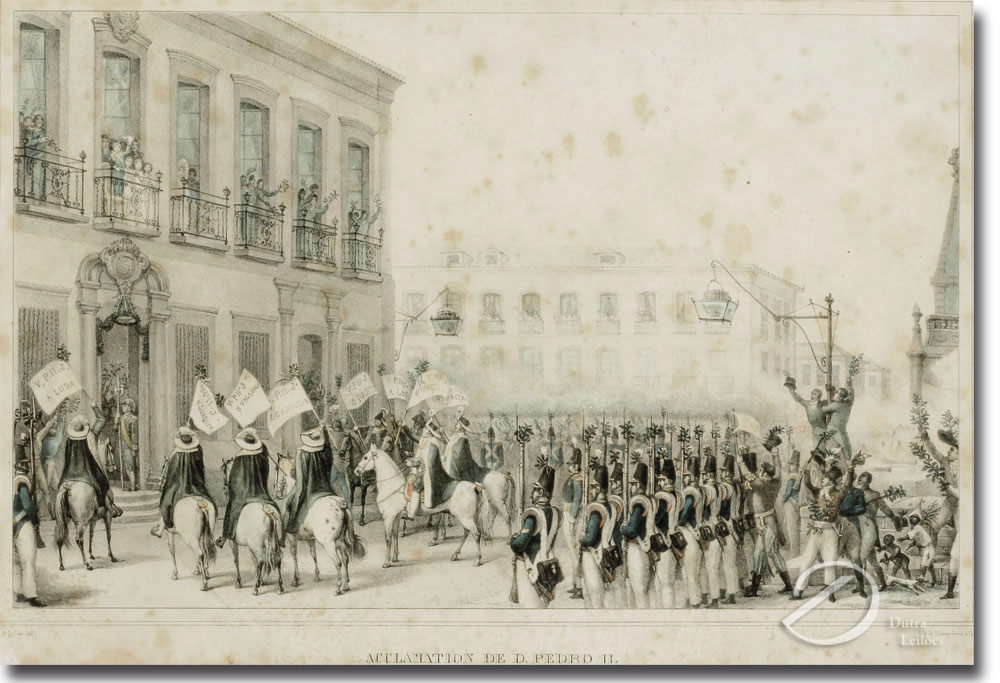 The largest collection of porcelain pieces representing all the services of the Brazilian Empire – D. John VI, D. Peter I and D. Pedro II -. Being able to distinguish the tureen of the D Roosters Service. John VI; Herringbone Service; Post Office Service; Service of the Shepherds; UK Service; Golden Pingo; Service of chamberlains, among others. D wedding service. And Pedro D. long-suffering wife, very curious, as each piece has a different design (there is 10 the auction); Viva service Independence. D. Pedro II there is the Hunting Service; Service Crown Purple, great services and PII PII small, Service Casino Fluminense, Paraguayan War Commemorative Service; Service of altar boys, among others;

Emperor Gold snuffbox with his portrait;

Pair of gold earrings, with picture of Princess Isabel, which was offered by it to each of the friends who danced the waltz of his 15 years;

Frontispício (facade) that belonged to the Church of St. Peter of the Clerics, in Rio de Janeiro, demolished for the construction of Avenida Presidente Vargas;

Two Images of Aleijadinho, a crucified Christ and a Master Santana;

Pair of lock mirrors P.I. – Emperor Pedro – one of the imperial palaces;

Large chandelier standing that belonged to the Imperial Palace; 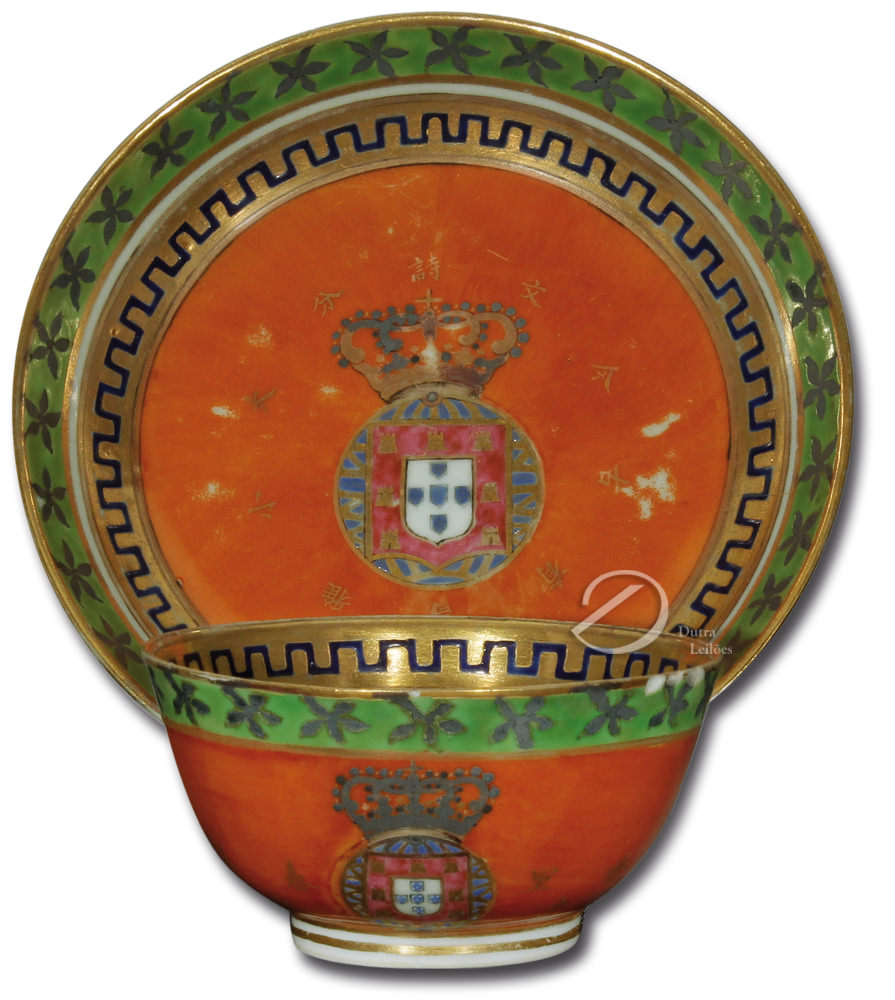 Large collection of crystal pieces that belonged to the D services. Peter I and D. Pedro II;

Collection of paintings by artists like Guignard, Anita Malfatti, Burle Marx, and the portrait of the Marquesa de Santos by Miguel Navarro Cañizares, among others.

Celso Figueiredo Neto translates, in few words, the origin and formation of this is that, no doubt, the most important collection of imperial parts of the country:

"The interest in antiques began at the home of my great-grandmother, Angela Loureiro, the owner Giloca, in the house of Av. Paulista.

his son in law, my grandfather, Celso Figueiredo, It was an empire enthusiast and concentrated their purchases in Brazilian imperial porcelain, making your home, na Al. Santos, molded to the Imperial Museum in Petropolis. Celso collected all his life until his death in 1982.

Inherited by my father, Celso Figueiredo Filho, Imperial Collection has become part of my family.

He and my mother, Heloisa Figueiredo, They loved the collection that has been the subject of thousands of meals before D saucers. John VI, D. Peter I and D. Pedro II.

The collection has grown and has expanded its scope. Crystals started to include, jewelry, buttons, commendations, arms, books and other objects that belonged to the Emperors and their families.

Celso died in 2015, Heloisa in 2016 and now this collection, which concentrates over 100 anniversary of the dedication of four generations of collecting, hits the market.

I am sure that the current collectors will recognize the quality and rarity of the collection now offered.

Each dish, each piece, sold here bring to your buyer the same joy and appreciation for our history that has always fascinated my family ".

"Without any doubt, after the Imperial Palace Auction, held in 1890, this is the most important auction on the topic. Represented by a collection of four generations, where each one of them panned and selected pieces of our history, managing to gather and preserve a very significant part of it ", complements Dutra. "All the pieces, no exception, They are worthy to be part of any museum, however important that may be ".

Before the auction, those interested can visit the exhibition of the pieces to 12 March, from 14 to 21 h at the same address where will be held the auction, Rua João Lourenço, 79 - Vila Nova Conceicao - São Paulo - SP. Catalog of content and other information are available on the site: www.dutraleiloes.com.br

Previous: Exhibition “Emblem of the Brazilian Culture” It brings a Work Retrospective Graphic Claudio Tozzi
Next: Women Pioneers are the subject of guided tour on Saturday at the Municipal Cemetery