Home / Art / “Love of art and skateboard” by Edmundo Cavalcanti

“Love of art and skateboard” by Edmundo Cavalcanti

“Love of art and skateboard” by Edmundo Cavalcanti

I have mentioned this in my profile on face, sample of polystyrene spheres, umbrellas and now shapes of skateboards, fantastic, the talents of Brazilian artists, no matter how long the road, or which tribe or class they belong, Art is art. Can make art, on a wall, in a can, imported into a canvas, on a piece of wood, paper, not matter. Art is expressed in places and objects never imagined, in a Tatoo. This is Art. 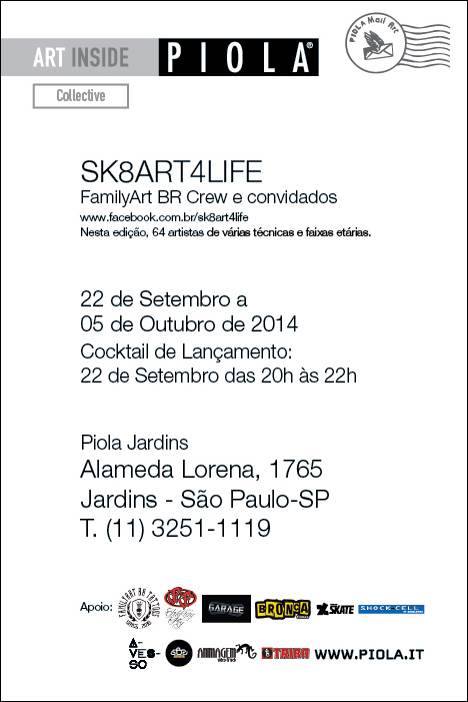 “We are aiming this show, become an event of future skate Fest with Mini Ramp, Bands, Live Painting and shows itself in sí.”

“We are united by only one goal: Amor à Arte e ao skateboard.”

“We have the spirit of bringing the art of skateboard surfaced again with a stamp also disclose new artists and different techniques.” – Words of Event Organisers.

With a strong and meaningful partnership with the Pizzaria Piola Jardins, which is giving us space each year, can thus strengthen this event, can make it a traditional and annual event.

Some details of the shapes, that will be exposed:

In the year that celebrates 25 years, IEL has special holiday schedule

"The way to get happiness is by making other people happy." Robert Baden-Powell