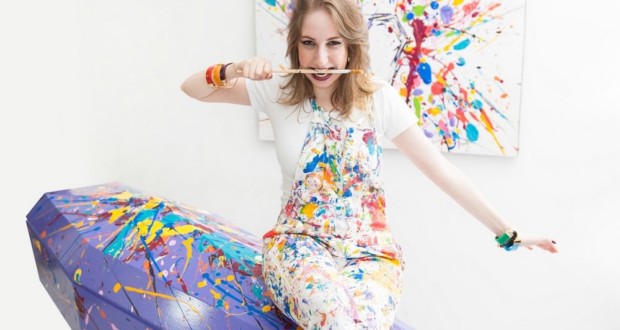 Inserting in artistic tradition which discusses issues related to death, such as the skulls mounted brilliants of Damien Hirst and the laying of Jan Fabre, the brazilian artist Aline Pascholati created their own coffins. However, the thought of this series differs from the work of Hirst and Fabre to present an optimistic view of death, more like Egyptian-themed painted coffins – sarcophagi are actually rectangular stone structures in which the coffin is placed – and the belief in life after death. The other side of the coin, that is, the harrowing vision of the passage of time and the finitude of human vanities, resulting in an inevitable death – in other words, Memento mori – is represented by another of his series, composed of black and white photographs of your great-great-grandfather clock and other elements that allude to the Ephemerality of life.

The beginning of the project refers to a screen 2010, still in his Parisian period, named Metamorphosis, same title that the coffin would receive six years later. The work was perfected in size in 2014, still representing a funerary urn flanked by butterfly wings on a black background, Ethereal and timeless. The message is clear. The URN becomes the Caterpillar health capsule that transcends its initial condition. Death is presented as a simple passage, as an insect crawling to a beautiful colorful wings and bright Butterfly. If there is a question, It's not whether or not there is a after, But what is that after, Since the passage is indisputable. 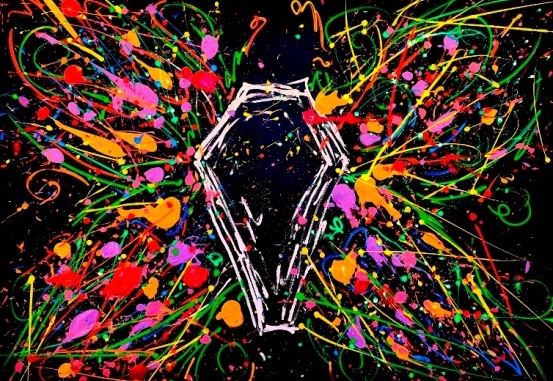 In the work of 2016, the wooden structure which loads the body is seen as the butterfly health capsule and traces of coloured acrylic paint come out from the center toward the edges of the lids represent the soul in your moment of transcendence, in which she lets her invóluco material through an explosion of vital energy, becoming so pure energy. The technique, inspired by that of Pollock, was perfected by the artist in his series Explosions, that translates into abstract images feelings and moods unconscious. The violet color of background, same tone of butterfly's wings in the version of the painting of 2010, It is extremely important, because it means transmutation, transformation, in several philosophies, as the rose Cross. 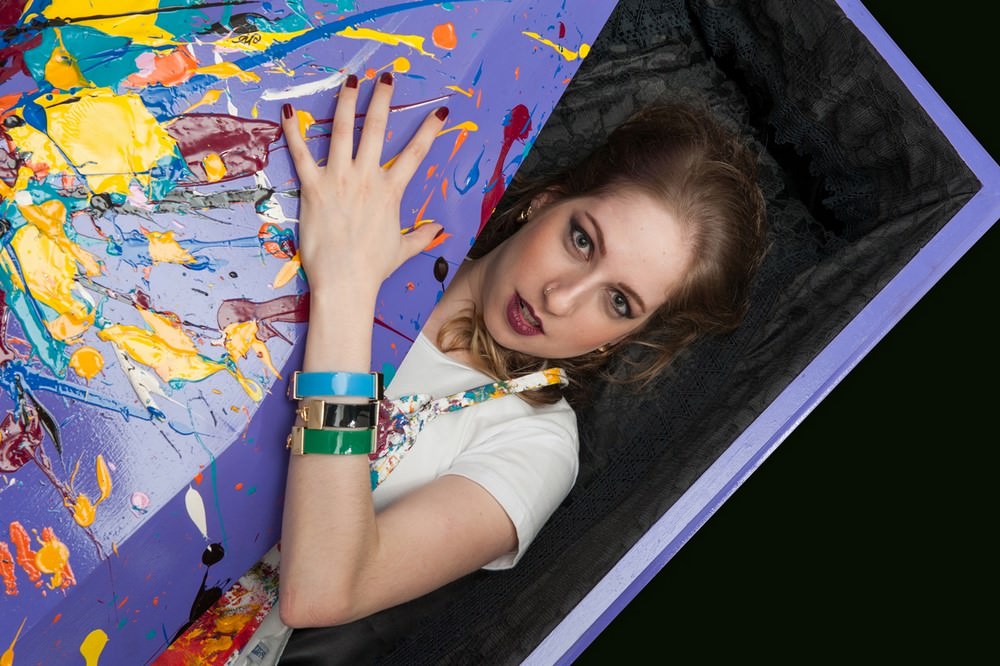 The work was carried out with the sponsorship of Bignotto Urns industry – the largest in the sector in Latin America – with a funeral urn existing model adapted to better receive the layers of acrylic paint. The template in question had already done success, being the black coffin that received the body of the character ' Comendador José Alfredo de Medeiros» in the novel Empire, Rede Globo. 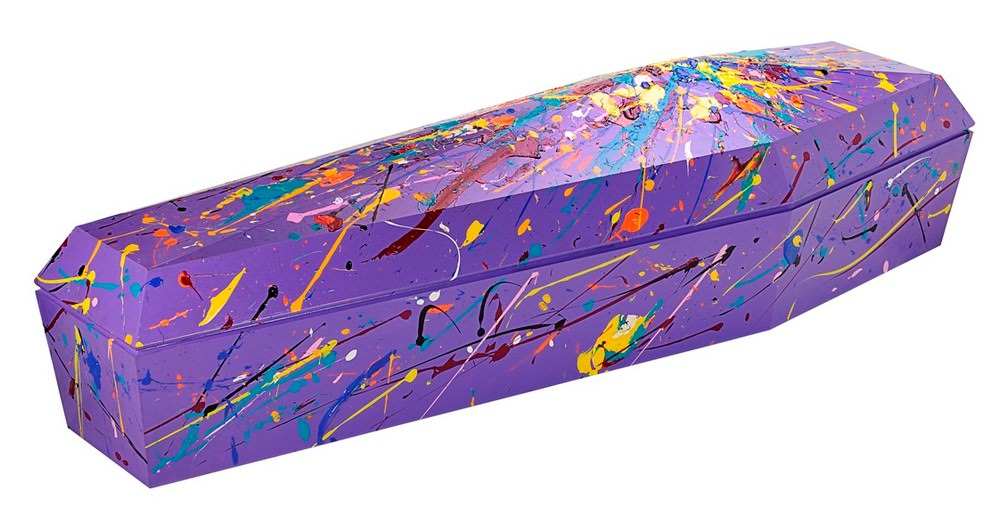 It is also clear inspiration from the Greek myth of Eros and psyche, in which the beautiful mortal Psyche loses her beloved, the god Eros, or Cupid, and after several difficult tasks can win him back, becoming immortal and ascending to Olympus, abode of the gods. In ancient Greek, the word Ψυχή – psyché – means both ' soul», about «Butterfly». The myth is an allusion to the transcendence of the soul and the immortality after earthly life. 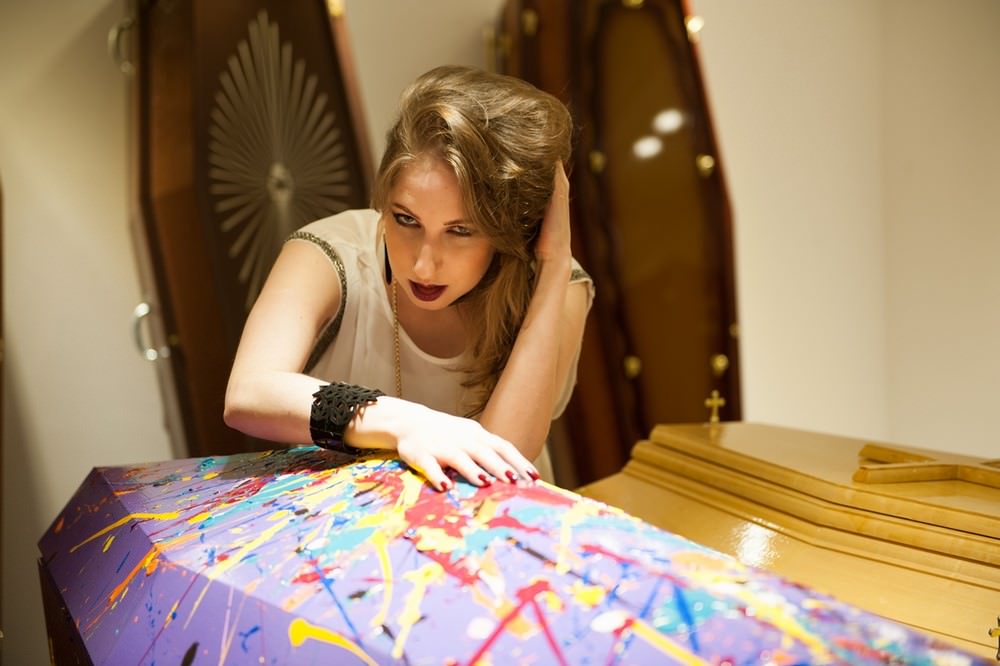 Graduated in art history by the Université Paris 1 -Panthéon-Sorbonne, the artist Aline Pascholati has already presented his work in seven countries – Brazil, France, Italy, Slovenia, Peru, Iran and Syria – in individual and collective exhibitions. It is expressed through the most diverse techniques: watercolor, oil, acrylic and gold and silver sheet on several, photography, stained glass, installation and video art, You can adjust each theme the best method of execution.

Besides the work of creation, the artist also writes about art, publishing since 2011 in newspapers, magazines and digital media. Recently, He founded his own site on art and culture, the Artrianon. Also has two books published: Paris with little money and FRANCE-c'est magnifique! A third, dedicated to the history and hidden symbols of the Royal castles of France, is in preparation phase.

With the support of industry of Bignotto Urns

Previous: One space A Space of Tulio Manuel
Next: Mazo extending Auctions art to capture 14 October