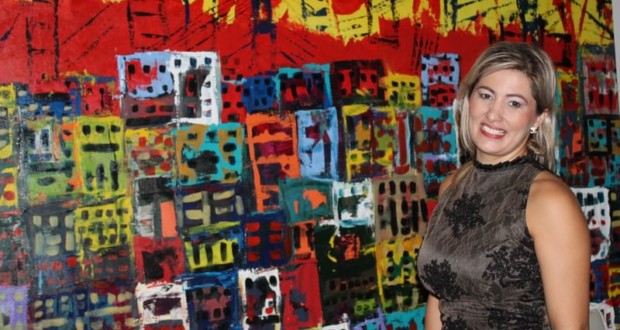 Roberta Urquiza and one of the works from the collection "Houses in the world - communities". Photo: S8 Communication.

Artist sorocabana ‘ collection exposed by the world and House’ in Portugal

Roberta Urquiza works to the city of Porto, This April,
where will be exposed at the port Art Gallery, until may.

Pieces from the collection ' Houses in the world – ’ communities, the artist sorocabana Roberta Urquiza crossed several countries already and now they get to Portugal, in another artist's exhibition. This April, Roberta participates in a collective show in the country, Porto Gallery Art Gallery, in the city of Porto, between days 30 of April to 20 de Mayo.

The work is part of the international project "Tides, Flowers, Colors and Stars Guide ", curated the artist Angela de Oliveira, It aims to promote and enhance the brazilian art around the world.

With the controversial theme and well known by Brazilians and in the countries where he spent, Roberta works depicting his impression on the community and slums around the world.

Spatulated and brush technique, oil and acrylic paint, the works are produced in abstract form and depict how would those communities in countries like Italy, Spain, Mexico and other countries similar to Brazil.

“Portugal and Brazil are complementary countries, in the economy, tourism and the arts; my works reflect the socio economic and cultural context of various countries and the Portuguese can enjoy communities pictured in my works”, says Roberta.

Known for the richness and quality of his works, Roberta Urquiza have increasingly gained notoriety in the city and abroad, having been invited to several exhibitions around the world.

Last March, the art of Roberta was featured in one of the biggest showcases in the world, in the United States, the Gallery Saphira & Ventura, in New York.

The same work was also part of the Brazilian Art exhibition in Vienna, Koko's Gallery, Áustria.

The artist has also had works displayed in other parts of the world, including the Carrousel du Louvre, in the French capital, and yet in Boca Raton, in Florida (USA). In June this year, Roberta will exhibit in Brazilian cities of Itapetininga, São Paulo and Búzios, in Rio de Janeiro.

Also in June the works will be exhibited in Vaduz (Principality of Liechtenstein), on the border with Switzerland.

Roberta Urquiza took the first steps in the art scene when he began doing painting classes to 20 years old. Early in his career was discovered by the same curator of Romero Britto and his work was gaining notoriety and recognition. Enterprising cream, Roberta, He was also ahead of small businesses, but none connected to art. Studious, the artist deepens their knowledge with a background in fine arts, Interior Designer and art history, where lives in constant update in studies, combining the work of Atelier. Currently the artist makes specialization in the Pan-american School of art and Design.

In Sorocaba, part of the collection of the artist are on display and for sale at Urban Arts art gallery, It is in the shed Duca, in Duque de Caxias Street,192, in the village Lion.

Previous: The complete Cinematheque film Club two years with tribute to Jacques Rivette
Next: Curitiba will receive the first meeting of Urban Sketchers of Brazil