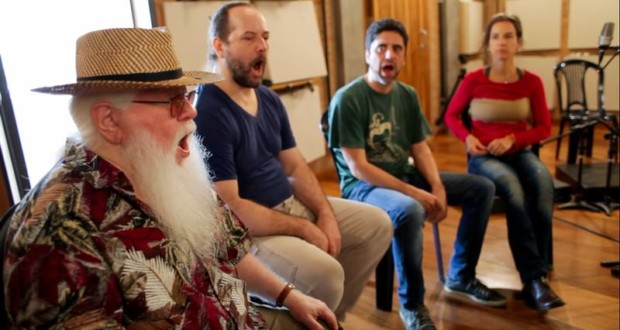 A Sesc Pinheiros receive in days 10 and 11 of October the new show of Barbatuques, on release of new album Ayú. On occasion, the group will be attended by Hermeto Pascoal as special guest.

Fourth release on CD of the band, Ayú has an overlap of different styles and aesthetics, restating the essence of Barbatuques and revealing the numerous sound experience experienced by the Group, as the carimbó, Coco, toré indígena, cry, maracatu, Baiana, Rock, Beatbox, Kecak and African music, as well as the influence of different percussive features and accents. The album features musical direction of Fernando Beard, the Group's founder, and the composer, conductor and music director Carlos Bauzys. 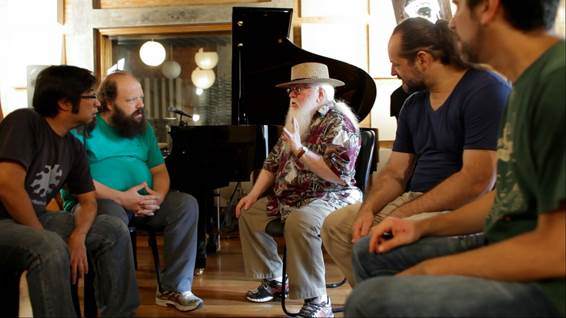 "The compositions of Ayú extend the body music group approach”, declares Beard, on the current album. Arisen from reflection on what new directions the group could go, the members of Barbatuques deepened on exploitation of timbres, melodies and harmony, transcending the simple definition of body percussion for body music. The trial of vocal techniques, melodic and rhythmic of the group resulted in a job more elaborate than the previous vocally.

In the Repertoire are the unpublished compositions of the Group, built in different formats: now with lyrics, now instrumentals, with a focus on Phonics or percussive techniques. The variety of composers active between the fifteen members bring diversity to disk, reinforced by the participations of Naná Vasconcelos and Hermeto Pascoal during the recording, two references within the universe of sound body.

Body music group arose in 1995 and consolidated, developing a single job, through his compositions, techniques, exploration of timbres and creative procedures, becoming an international reference in.

From research and creations of Fernando Beard and your contact with musician Mohd Mardani, Barbatuques gave rise to different techniques of body percussion, vocal percussion, tap and musical improvisation, developed in their collective experiences and added to the individual members ' luggage.

Their previous album, Tum Man, released in 2012, It was dedicated to children. The group is still in your Discography The body of the sound, from 2002 and The following is this, from 2005.

Previous: IV Festival of storytellers of the CCBB Rio de Janeiro Education celebrates the week of the child and the 26 years of the CENTRO CULTURAL BANCO DO BRASIL
Next: Short ' bird ' Skin appears in shows Premiere Brazil: short documentary competition at the Festival do Rio