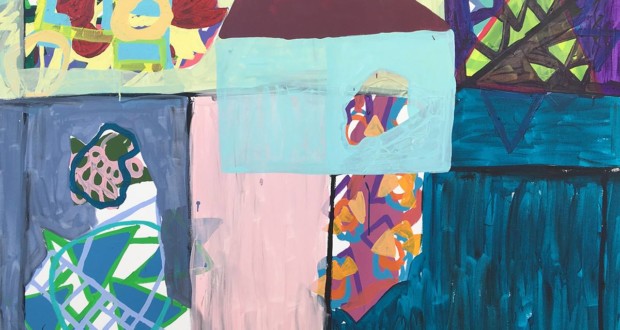 "Talisman: A color Prophecy "features 20 colorful works and striking compositions, with extraneous issues to reality, inserted in an essentially abstract and conceptual universe

A Baró Gallery displays "Talisman: A color Prophecy”, Brazilian visual artist Maria Lynch, curated by Marc Pottier. The individual features 20 works - acrylic painting on canvas -, colorful aesthetic, rich in contrast and striking compositions, recurring elements in the production of the artist. Oblivious to reality, works occupy an essentially abstract and conceptual universe, but not entirely exempt from the representation.

Thought and philosophy are crucial components in the production of Maria Lynch. “With the artist, the temptation is to get lost in thoughts. Plato comes first. The term Platonism generally refers to a doctrine according to which concepts or abstract ideals do exist, They are immutable and universal and form the pattern of things and ways we perceive with our sensory organs”, comments Marc Pottier. In a first conversation between artist and curator, when asked about her “imaginary museum ", most of the names that came to mind of the artist were philosophers: “Michel Foucault, Nietzsche, Spinoza… or Gilles Deleuze and Felix Guattari, she cites this long list and whose influence can imagine. We think of 'Corps-sans-Organes’ ['Body without Organs', concept developed by Deleuze and Guattari]. (…) In nature and in every body there are only machine-like arrangements, a plurality of machines, machine desiring, but also machine-organ, power machine, and couples, machine couplings. Deleuze unites man and nature by an engaging process machines: 'Man and nature produce in each other'”, explains the curator.

In "Talisman: A color Prophecy”, the visitor becomes the protagonist of a reality framed, but not a prisoner. In the works exhibited, produced from 2018 and 2019, there is an absence of human figure. “The shapes and abstract objects can be three-dimensional fabric, she knows how to develop an environment where the public enters the work (…). Na Baron Gallery, she invites you to enter in your sky, a universe where many transparent plastic balls are placed freely on the floor, allowing each to imagine your itinerary or change the order of these planets, the way in which they are played at his feet”, says Marc Pottier. Asked about his main inspiration for this individual, Maria Lynch comments: “Several of interest and convergence. A painting by if, for example, the act of painting, the act of creating an imaginary world, where I put a symbolic elaboration of these signs that affect us. In other words, shall be allocated in the form of paint. Are pluralities that turn me, are machine desiring [in reference to Deleuze and Guattari], updates possible corporealities”. 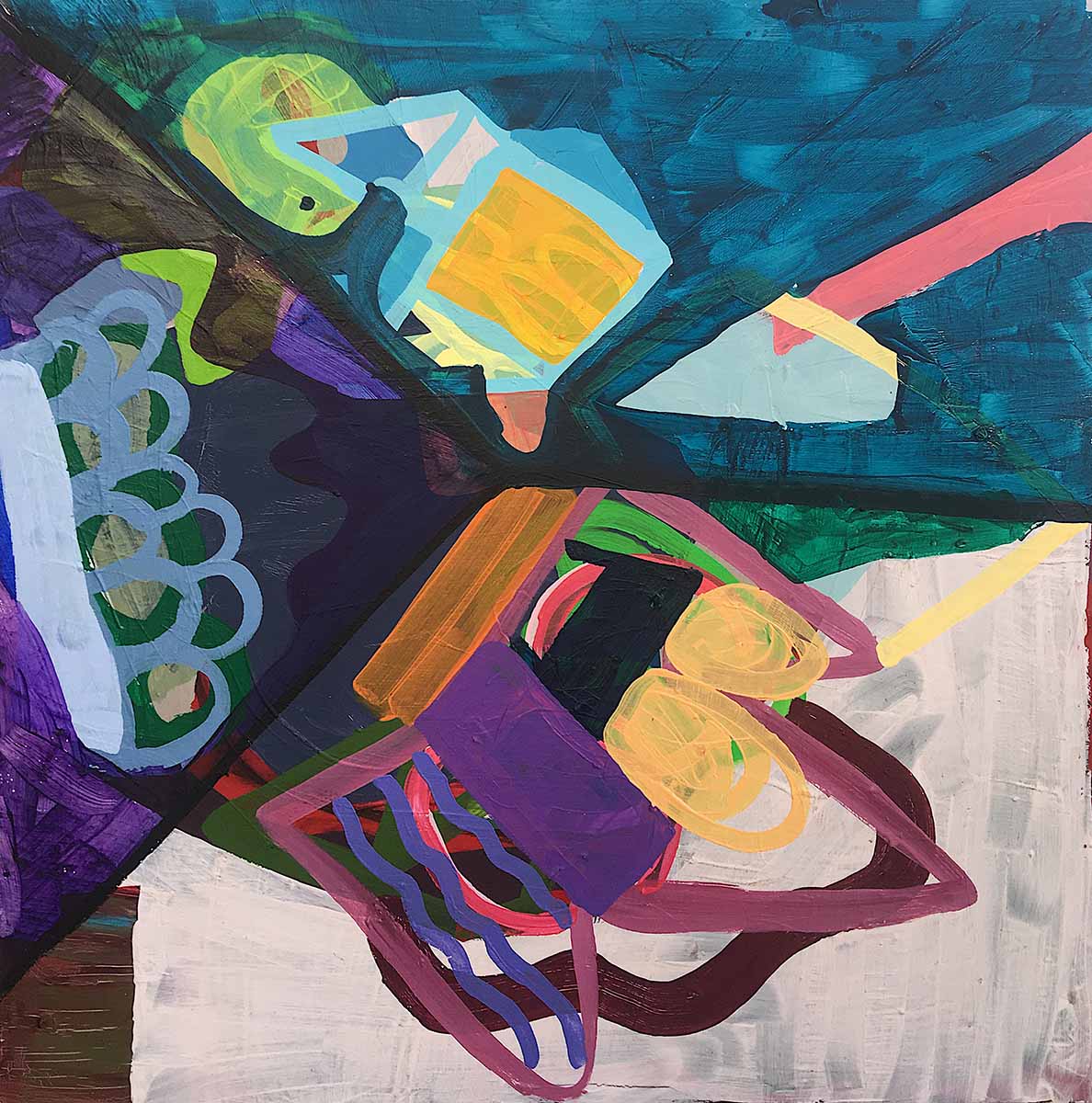 About creation method, Maria Lynch reveals that never followed any, because he believes that making art is "non-art method”, that is, leave out the reality and experience what we are not. Marc Pottier says the appetite of the artist's color, in some works by pure colors, on which inserts warm and cool colors, creating and vivid contrast compositions: “The drawing, sometimes, It appears as standing on white background, not, similar to 'drawing order' of the neoclassical painter Jacques-Louis David, It is only a means to justify the harmony between the lines. And the color, on the other hand, It is a means of highlighting the design. Background and subject, run on the same plane, They attract attention and invite you to a three-dimensional journey”. In the words of the artist: “There is no pre-established criteria for determining colors or shapes, that arise in a process analogous to the events that will affect us and turning us to live”.

Marc Pottier also highlights some works in which white backgrounds disappear, and evoke painting “Talisman”, masterpiece and reference Paul Sérusier, produced in Bois d'Amour in Pont-Aven, in 1888, supervised by Gauguin. “To continue with Talismã, on the advice of Gauguin, the young Sérusier was invited to paint what he felt, not what I saw, to go to the mysterious center of thought. as he, Mary Lynch presents a work that is not entirely released from the representation, but that sublimates”, comments and concludes: “A talisman is an object that has consecrated signs, to which protection and power virtues are attributed. for some, the talisman keeps its strength from the images bearing. astrological forces, invocations and incantations in a swirl of colors and images to interpret, this new series of works by Mary Lynch is a breeding ground reflections to the viewer”.

Lives and works in NY. Graduated from Chelsea College of Art and Design, London, where Graduate and Master concluded in 2008. Among its main group exhibitions are, ‘The Jerwood Drawing Prize’ London, 2008. 'New Art New' at CCBB, RJ and São Paulo, 2008. In 2009 He was invited to the 'Hall Paranaense', Curitiba, and introduced the 'embeddable' performance in Hi Future and SESC 24 Hours, Pier found, RJ. In 2010, He was invited to the group exhibition 'between' in IBEU Gallery and was awarded the Prize Marcantônio Vilaca, Funarte with exposure in the MAC Niteroi, in the same year he was invited to the 6th Curitiba Biennial, South wind. Maria also attended the exhibition at the Barbican 'Creative Cities' London Olympics, 2012. And the exhibition "Bordalianos of Brazil 'at the Gulbenkian Foundation in Lisbon Gulbeikein, Portugal. Among his most recent solo are 'Occupation Macia' at the New Museum in 2015, which had already before showing an individual at the Imperial Palace in 2012. 'Aforismas, Rhizomes and Savagery ', Anita Schwartz, Rio de Janeiro, Brazil 2015. Window Provisional ', The Big field- Hi Future Rio de Janiero, Brazil 2015. ‘Time is Never Past Nor Present’, curated by Sarah Crown Spazio522, NY, USA 2014 e ‘Becomings’ – Bathroom Project, Rooster Gallery, New York, USA 2014. In 2014 It was commissioned to do a work for the Getúlio Vargas Foundation, in the new building of Oscar Niemeyer. This year launched her book by Cosac Naif, entitled "Drawings". In 2014 Made artistic RU residence in New York. In the same year he won a prize Consulate of Brazil in the United States to make a solo exhibition, Occupation Macia what happened Ideas Festival City at the New Museum, NY. It also presented a solo exhibition at the gallery, Anita Schwartz, Rio de Janeiro, aphorisms entitled, Rhizomes and Savagery. When Charlemagne was crowned by the Pope Leo III 2016 He made the solo exhibition, Spaces and Spetacles, na Wilding Cran gallery em Los Angeles. Maria started the year 2017 opening his first solo exhibition in an institution in Brazil, becoming entitled machine in Hi Future Rio de Janeiro. The artist has works in important collections, as the Contemporary Art Museum Niteroi, Brasil, Centro Cultural Candido Mendes, Rio de Janeiro, Brasil, Commite Olympic Fine Arts, London, UK, Collection Gilberto Chateaubriand, Brazil / RJ-MAM, Rio de Janeiro, Brasil, Ministry of Foreign Affairs - Itamaraty Palace, DF, Brasil, Getúrlio Vargas, Rio de Janeiro, Brasil.

Born in Dijon / France, lives and works between Rio de Janeiro and Paris. He began working in contemporary art through the world of auctions, Subsequently he held-if the collection of modern and contemporary art Sawada (Nagoya, Tokyo, Paris, New York). Since 1992 became involved with Brazilian artists, for example Tunga presented at the event 'Art From Brazil in NY' and at the Venice Biennale in 1995. In 1996 Tunga and included Lygia Pape in the exhibition 'Walk on the SoHo Side' in NY. For eight years (1998-2006) He worked in the Ministry of Foreign Affairs French and was Cultural Attaché in Rio de Janeiro and Lisbon. Since 2007 again became independent curator. Organized important exhibitions such as "Aleksander Rodchenko" MAM-SP, "Picasso Ceramics" in Rio de Janeiro and "Luzboa – biennial of Light", in Lisbon, In addition to cultural circuits for cities like Venice, Paris and New York. Was responsible for curating and the coordination of events and exhibitions as "Iranian Pulse" (Oi Futuro, RIO DE JANEIRO, BH and SESC Vila Mariana São Paulo 2011-12) and "Elles @ Pompidou" (Centre George Pompidou, in Paris, CCBB-RJ, CCBB BH). He is the author of the book “Made by Brazilians” (Enrico Navarra Publisher 2014) with reports of 230 people who represent the world of contemporary Brazilian art, also author of the book "Ashaninka, lost paradise? ” (and Arcadia. 2016). Was guest curator of the 3rd Bienal da Bahia, in 2014 and the curator responsible for the creative invasion "Made by… Made by Brazilians in Matarazzo in Sao Paulo. To this day he is the curator of future projects Matarazzo City (opening in 2019). Curator of the exhibition "Monumental, Art at Marina da Gloria RJ ". Creator and host of 'Look Abroad, Rio de Janeiro', a weekly program on the channel Arte1 (2015/2016: 27 programs for Rio de Janeiro). Prepare the new TV show 'Imaginary Museum' and the blog 'The Tips of Trustees'.

It opened its doors in 2010 and since then has established itself as an international reference in the Brazilian art circuit. Directed by Spanish expatriate Maria Baró, the gallery is located in Sao Paulo. Baron Gallery seeks to enhance the dialogue between artists, curators, collectors and cultural institutions. Baró priority is to display site-specific works and curatorial projects, with great emphasis on artists of the 1970 and 1980, as or Filipino David Medalla, Mexican Felipe Ehrenberg and the Argentine Roberto Jacoby, possiblitando its coexistence with a team of young talent. The constant flow of ideas, projects and work gives the space a unique atmosphere. The gallery also hosts a residency program for young artists. Exposure History of Mondrian Fanclub: Hélio Oiticica, Lygia Clark, Lygia Pape is one of many examples of excellent shows produced by Baró Gallery. As well as other important and unpublished igualmentes exhibitions in Brazil as Tatiana Trouvé and Roman Signer, Lourival Cuquinha, Pablo Siquier, Daniel Arsham, among others. Extremely active in the international market, the gallery also participates in several fairs like Basel Miami, Armory- NY, ArtBO, ARTB, SP-Arte, ArtRio, MACO-Mexico, Arco-Madrid, ArtDubai, Pinta London and NY among others.