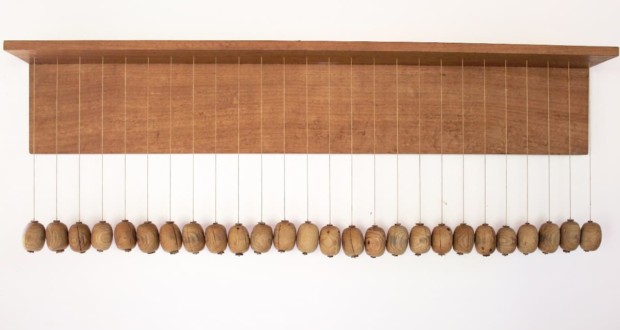 “…at this moment and before yesterday too, is the possibility to see myself and observe the other!”
Maxim Tabby

A BELIZÁRIO Gallery opens a new cultural space in São Paulo with the exhibition from Maxim Tabby – “…from where we live", under the curatorship of Marcus Otter, with 15 works between sculptures and objects where the main material is wood that conceptually describes the truth that “every house is beautiful; every house is one meter more in size, including and mainly your!”, how does the gallery owner define Orlando Lemos.

José Roberto Furtado, Luiz Gustavo Leite de Oliveira and Orlando Lemos, the craftsmen of the new gallery, insert in the São Paulo exhibition circuit a new option of artistic propagation place destined to divulge and commercialize works of modern and contemporary art. The project of Belizean Gallery originates in Belo Horizonte, where the three friends met and, for his experience in the Minas Gerais art scene, gives them the necessary support to present a work of high standard and originality that is established from its presentation to the local circuit with the recent and unpublished production of the artist Maxim Tabby.

“’…from where we live’ brings together an expressive set of the artist's recent production. His works dialogue with crafts and popular design building an archeology of memory, where objects are re-signified and reconstructed. He dialogues with northeastern artists of his generation such as Carlos Mélo and José Rufino and also, with Nuno Ramos and Tunga. This is the expressionist family where the artist belongs; this is your universe, this is your voice", explains the curator.

Maxim Tabby arrives on the artistic circuit in the years of 1990 with their works that convey sophistication and detailing in the simplicity of the choice and selection of materials and formats - "the criteria are the same as those of masters and construction assistants on their 'sites', the desire, the willingness and need to solve doubts and problems, seek answers", says the artist. Defining the place to live, offers possibilities of intellectual immersion that can direct both to the material aspect of the 'house', where you live and settle down as more playful, immaterial, directed to the 'body', the real human habitat, where history is also built. In the words of Marcus Otter, “The hedonistic Bahia, seaside, sexy, Salvadoran, makes room for wild Bahia, countryside, backlands, northeastern. this is the land, the territory, the source of knowledge from where the artist takes his stones and pearls to assemble poetic compositions full of authenticity and natural potency”.

Competitor, aware and aware of the current scenario, both globally and close to the place where he develops his work, Maxim Tabby assumes its role of general awareness with its art, and assumes non-static positioning, always evolving, on the move, with what comes next. "There are always developments, required, because if even the fruits sin…there is no error", declares the artist.

"Admiring these formal and conceptual articulations, we learned from Maxim Malhado that only creative action dignifies the human species. And that the ability to innovate, transform and interpret what we call real, can provide human beings with the essential tools for art and science to be forever the “holy warriors” that protect the world from “evil dragons”.” Marcus Otter 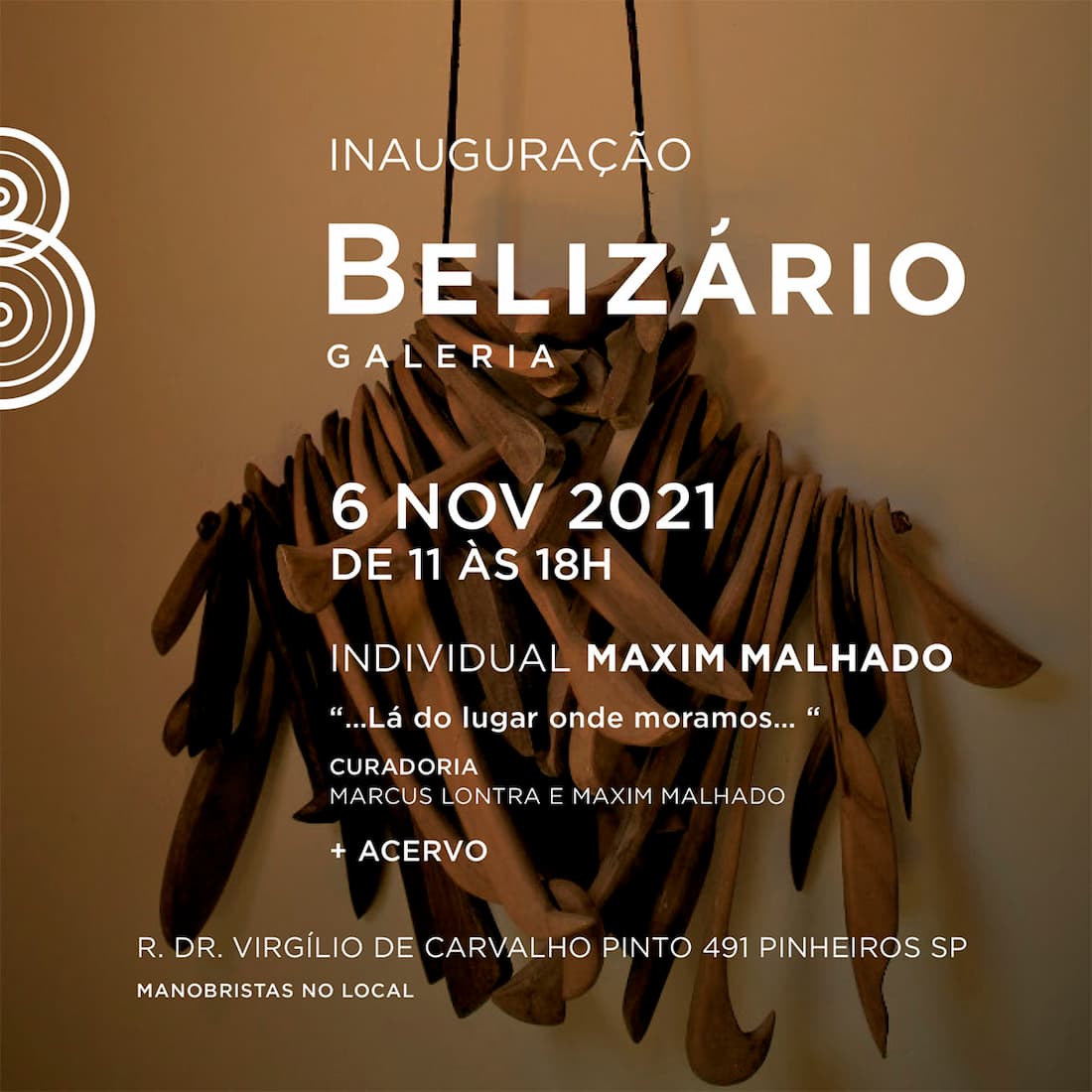 A BELIZÁRIO Gallery arrives at the São Paulo art market in 2021 and is the result of a partnership between Orlando Lemos, José Roberto Furtado and Luiz Gustavo Leite. A concept of space for culture that was born in Belo Horizonte with Orlando Lemos and the Objectaria Belizarar, that turns into Belizer Gallery, also in Belo Horizonte, making art exhibitions of new and promising artists like Paulo Nazareth who starts his trajectory in the place. Its proposal aims to present itself as an additional option for participation and visibility of the production of emerging and consolidated artists in the panorama of Brazilian contemporary art in the São Paulo cultural circuit. The gallery joins the movement that seeks to promote horizons that establish new ways to redirect and expand the art market, thinking about the different trajectories and artistic productions that make it up. Thus, aiming at the promotion of the intrinsic cultural diversity in contemporaneity, serves as a stage for new and established artists, national and foreign, in partnerships with curators who are also imbued with the same purpose. In BELIZÁRIO Gallery, we seek to serve a public that seeks the acquisition of artistic works and, also, the creation and promotion of new collections. Its collection consists of different themes and aesthetics, through the poetic universe of each artist. Its repertoire encompasses artwork from different languages, supports, techniques and media such as drawing, sculpture, photography, engraving, painting, installation and others. A BELIZAR is Orlando Lemos in artistic direction, active in the world of art since 2001, José Roberto Furtado in administrative and commercial management and Luiz Gustavo Leite in the social direction.

Lives and works in Massarandupió, Bahia. Having started to exhibit from 1995, is awarded seven times at the regional salons of Bahia, and, in 2001, receives the Award Acquisition of the VIII Salon of the Museum of Modern Art of Bahia. He is selected at Itaú Cultural for the editions of 2001 and 2003 of the RUMOS Project and, in 2004, participates in the 26th São Paulo International Art Biennial. Participated in exhibitions at the National Salon of Goiás, Pará National Art Salon, Curitiba National Salon, PR, Montevideo Biennial, Uruguay. He has works in the collections of institutions such as Galeria Maxi ACBEU, Salvador, BA; Salvador Porto e Mar Project – Codeba; Danneman Cultural Center, Saint Felix, BA; Brazil-Germany Cultural Institute | ICBA, Salvador, BA; Bahia Museum of Modern Art, Among many. He is nominated for the PIPA Award in the editions 2011 and 2015.

Marcus de Lontra Costa is an art critic and independent curator. He was editor of the magazine Module; director of the Parque Lage School of Visual Arts; art critic two newspapers The Globe, Press Tribune and This Is and, also, advisor to the Ministry of Culture. He also directed the Brasilia Museum of Modern Art, DF, Museum of Modern Art in Rio de Janeiro, RJ and Recife Museum of Modern Art, PE. He was Secretary of Culture of Nova Iguaçu (RJ), in the government of Lindbergh Farias. He was the curator of the shows: "How are you, generation 80?” (along with Sandra Magger and Paulo Roberto Leal); "Wicked Childhood", MAM- RJ; "Where are you generation 80?”, The CCBB. Since 1998 is Director of the Otter cultural productions.

Lives and works in São Paulo, SP. With an incomplete Bachelor's Degree in Arts at UFMG, has a long trajectory in the Minas Gerais cultural circuit as curator of institutional exhibitions at the Grande Galeria do Palacio das Artes, no FUNALFA Cultural Center, in addition to projects in cultural spaces and public and private galleries. In the 2000, takes her sensibility and talent to Fashion, becoming an expert in the segment. In 2014, returns to his old passion for culture in the arts segment, joining Orlando Lemos Galeria as a dealer.

Luiz Gustavo Leite de Oliveira lives and works in São Paulo. Doctor of Medicine from FMIt, MG, with specialization in General and Plastic Surgery in Belo Horizonte; has a partnership in Laprat Bioevolution & Spa, SP, besides acting as speaker da Allergan Aesthetics. Arrives in São Paulo in 25 August 2009 where consolidates your medical career, today with a successful trajectory. A few years ago, your appreciation for aesthetics and beauty, brings you closer to the art world where, step by step, becomes a collector with specific pieces that you can talk about with details about format, history and author.

Lives and works in Belo Horizonte, MG. Graduated in Physical Education from UFMG, he has a postgraduate degree in Contemporary Art and Art History from PUC/MG. Director and founder of Orlando Lemos Galeria, headquartered in Nova Lima, MG. Curious, is recognized and respected by his peers for discovering and launching new talent in the visual arts.