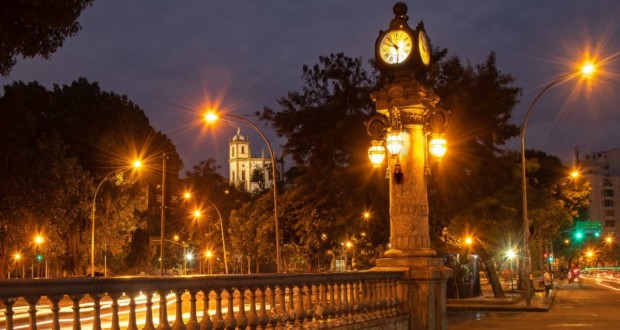 The portal Ó Glória! is released in March, month of the anniversary of the city of Rio de Janeiro

“Glória has a decisive place in the history of Rio de Janeiro and Brazil ”
Mariana Varzea, museologist and curator of the Ó Glória project

“Glory is not just any place, it is important for cariocas to know this, it is important that Brazilians know this”, says the architect and urban planner Margareth Pereira in one of the unpublished testimonies about the neighborhood included in the website Oh Glory!, to be launched in March by inspirations Unlimited, museologist producer and historian Mariana Varzea. The bilingual website presents the most complete coverage of the neighborhood, revealing an absolutely remarkable landscape circuit, true open-air museum of the history of Rio and Brazil. “In addition to the rich cultural heritage, landscaped and architectural that gathers in its streets, it was in Gloria that in 20 January 1567, it happened, by definitive, the occupation from carioca lands. We need to tell this story, in what it brings about making and erasing memories ”, says Mariana Varzea.

Oh Glory! is an invitation to learn more about this cultural heritage, material and immaterial and reflect critically how the territorial occupation of Rio de Janeiro took place, since before its foundation. Based on this memory, rethinking and proposing new futures, giving due prominence to cultural heritage as a fundamental link in the revitalization of the city.

The launch of the portal is scheduled for March, month of the anniversary of the city of Rio de Janeiro, and shows through extensive historical research and iconographic material that the city has benefited from urbanization experiences in the area, as the first urban sanitation station and the various landscape movements. “Gloria is the laboratory of Rio's civilization”, emphasizes the historian and professor Paulo Knauss. For both, were indicated by means of an interactive map 32 listed cultural assets (explained in entries with photos) and pointed out the location of the 120 preserved cultural assets, tabs with the urban evolution of the neighborhood, its main architects and landscapers covering 400 years of history. The rich content brings together 50 historical iconographies; 100 current photos made especially for the website, 15 expert testimonials videos; bird flight showing a day in the neighborhood and an exhibition with 35 images unpublished of photographer Cesar Duarte.

Through the gardens, the architecture, of monuments and fountains, it is possible to retell this history of the city, from the occupation of these lands by Tupinambás villages to the present day. In this small and charming space in Rio, connection point between Santos Dumont Airport, the Guanabara Bay, the center, Lapa and the neighborhoods of the South Zone, we find a mosaic of styles, ideas and characters that translate Rio's cultural diversity. This diversity that makes Glória a unique place in Rio de Janeiro, and its cultural landscape contributed to the recognition of the city as a World Heritage Site by UNESCO, in 2012. This was one of the relevant points for the sponsorship of the City of Rio de Janeiro, through the Municipal Secretary of Culture, since promoting equity education actions, are important for the integration of historical heritage into the daily life of the community. 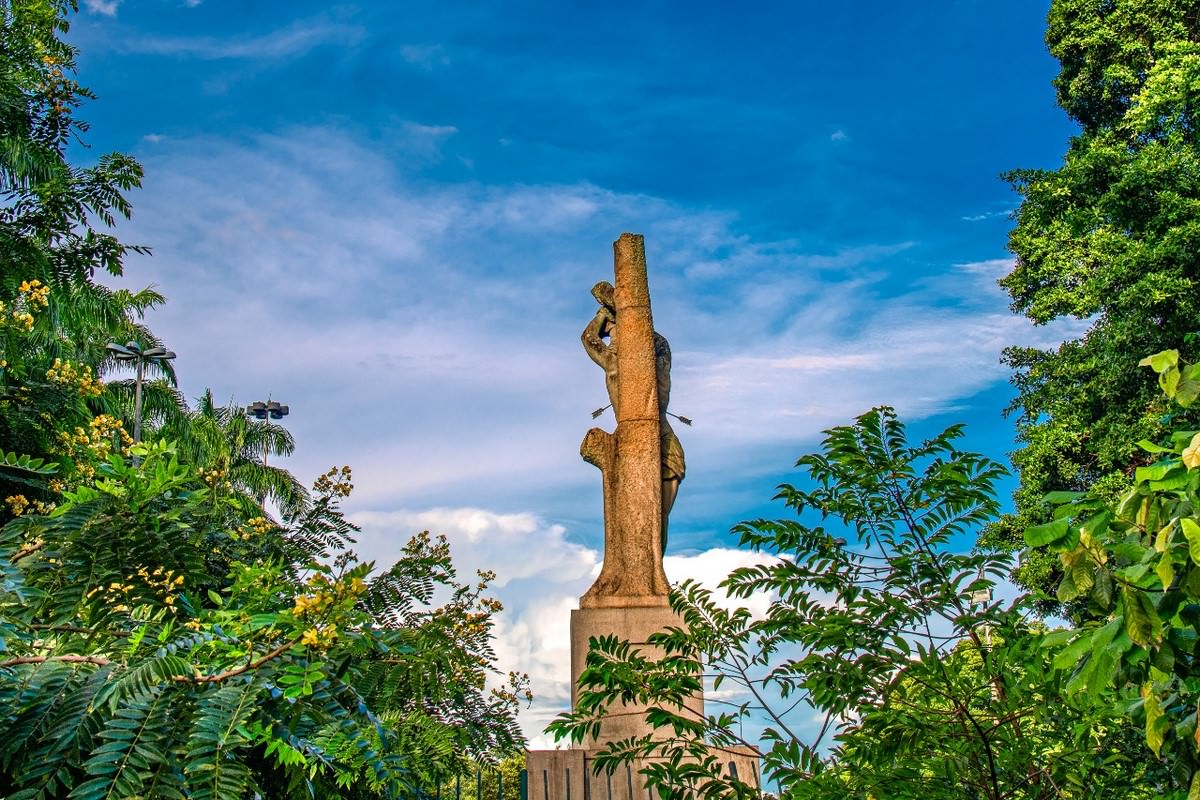 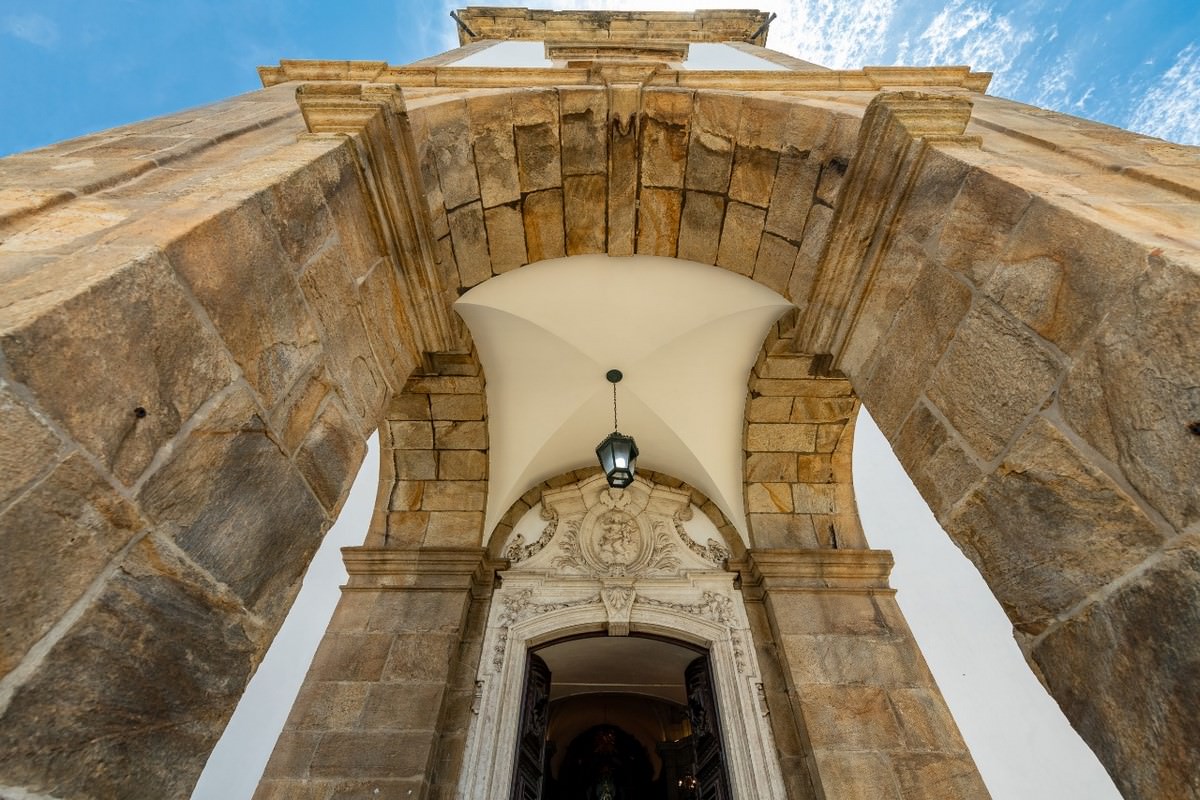 Portico of the Church of Glory. Photo: Cesar Duarte. 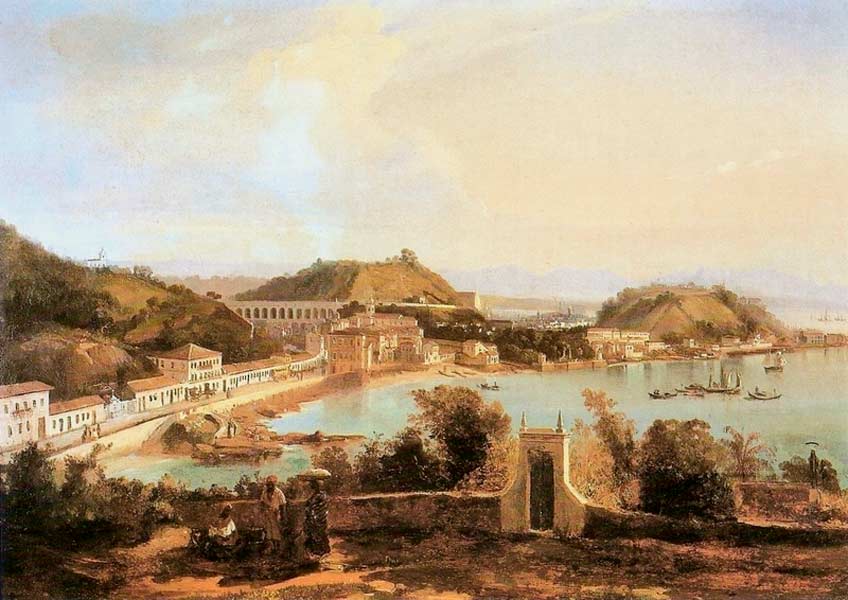 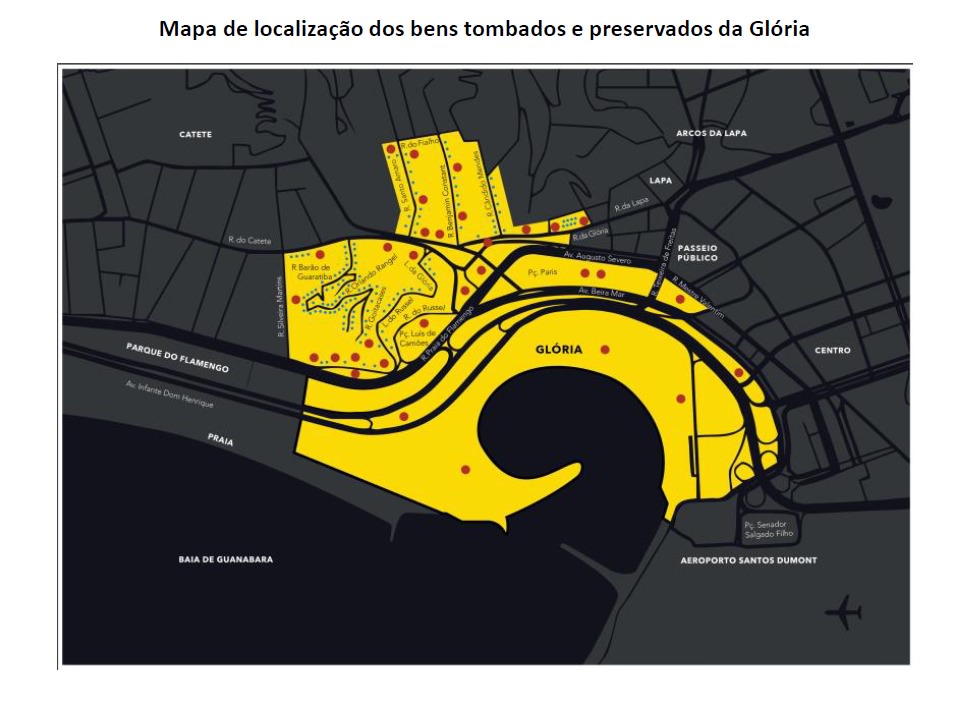 Map of the location of the listed and preserved goods of Glória. Disclosure.

According to Rafael Werneck, marketing manager of Rede D’Or São Luiz, it is an honor to contribute to the neighborhood in which the group opened the newest hospital complex in Rio de Janeiro. ”Collaborating for the preservation and restoration of cultural heritage is one of the commitments of the sponsorship policy of Rede D’Or São Luiz. The Ó Glória website is complementary to the initiative of restoration and modernization of the Beneficência Portuguesa building, located on Santo Amaro and Benjamin Constant streets, that for more than two centuries, marks the monumental landscape of the city of Rio de Janeiro.”

To stroll through Glória is to find true jewels of the past, imperial palaces, republican mansions, villages and small buildings of the most varied colors and styles, that often carry the charm of the patinas of time, other times, sadly, present themselves abandoned to their own fate. It is necessary to pay attention to the safeguarding of this cultural heritage that forms a bridge between colonial and modern architecture. In the words of the philosopher and critic of Art Luiz Camillo Osorio, “Glória is a meeting place between the city, nature and architecture. ”

The site also has the support of the Rio World Capital of Architecture and the World Congress of Architects, which will take place in July this year. In addition to the national and international dissemination of this heritage, one of the site's goals is to promote urban education and raise awareness among residents and businesses in the neighborhood about the cause of preserving and enhancing their cultural heritage, material and immaterial. After all, in Gloria the popular celebrations, samba and carnival are old traditions that began since the 19th century and continue to the present day, attracting thousands of people a year.

The Ó Glória project!, idealized and realized by Unlimited Inspirations, is sponsored by the City of Rio de Janeiro, Municipal Secretary of Culture and Rede D'Or through the Municipal Law of Incentive to Culture of Rio de Janeiro – Lei do Iss.

Dweller of Glory, the carioca Mariana Varzea has dedicated his life to culture and museums. She has a degree in museology, with a specialization in History of Art and Architecture, master's degree in Social History from PUC Rio and in September he will defend his thesis on the promotion and financing of museums, at the University of Museology, by the Lusophone of Lisbon.

There are 30 years works in public areas, private and community, developing countless social and cultural impact projects and initiatives. As superintendent of Museums of the Secretary of State for Culture, he was responsible for the policies for the museological area, that involved preservation activities, documentation, search, management, Communication, expography, financing and promoting the Rio de Janeiro network of museums. A period marked by museological effervescence in Brazil.

He was at the forefront of important exhibition and editorial projects, lending his attentive and creative eye to the development of the curatorial concepts of these initiatives., as well as for the reflection of its financial sustainability - a theme that has been the subject of, studies and courses she teaches.

Act, actively and voluntarily, in entities such as the International Museum Council, in Brazil (ICOM-BR), the Brazilian Cultural Management Association (ABGC) and Regional Council of Museums (Corem / RJ).

Works in collaboration with several partners, from your company Unlimited Inspirations (2016) – a consultancy specialized in identifying and developing innovation for museums and cultural initiatives. Through Unlimited Inspirations, collaborates with the requalification of several museums, among them the Sítio Roberto Burle Marx (strong candidate for the cultural landscape of humanity by Unesco), the Museum of Tomorrow (reference in the world museum area and the most visited in latin america) and the Football Museum, of São Paulo, that stands out for its differentiated actions during the pandemic.

She is the creator and curator of HiperMuseus, research and development platform aimed at forming a technological culture that promotes a greater connection between museums and society, co-realized in partnership with the Vivo Museum. 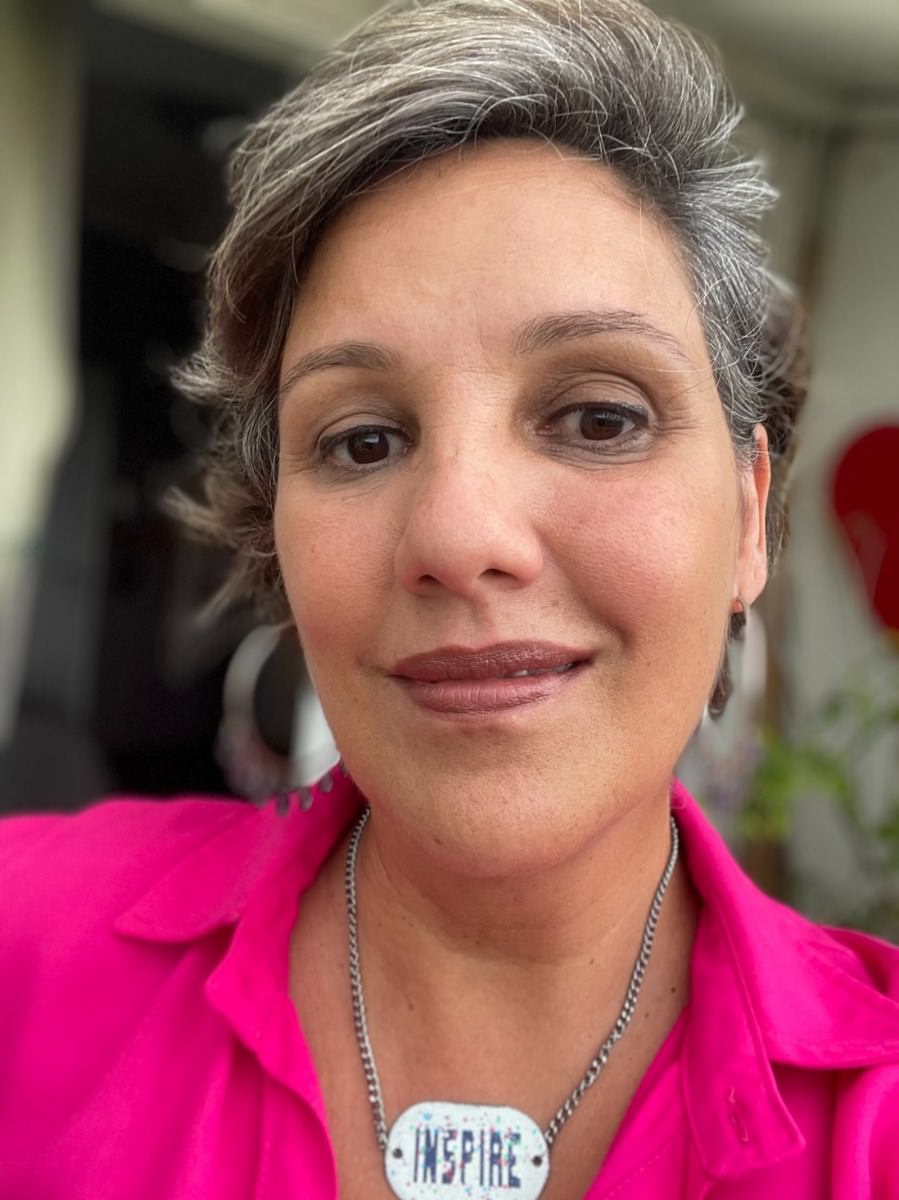 Cesar Duarte, professional photographer. He works in his own studio and his main focus has been on urban views and commercial studio photography. Graduated in Social Communication at PUC-RJ, signed photographs for countless editorial projects and participated in many others, providing your work for both covers and content.

The front of the publisher Edições Uiti, who founded in 2006, launched books of great impact in the Editorial market such as Árvore Cidade Rio de Janeiro, Tree City São Paulo, Art Environment Rio de Janeiro, among others. The first two of them were awarded two Pini awards for graphic excellence. With the partnership of Editora M4 participated in major projects in the area of ​​natural and built heritage, publishing his work in books as Brazilian Intangible Heritage, Brazilian Material Heritage, Rio Heritage, Brazil Tree, Terra Brasilis, among several other contributions. Altogether there have been more than 50 publications between books art, artist catalogs and corporate reports. 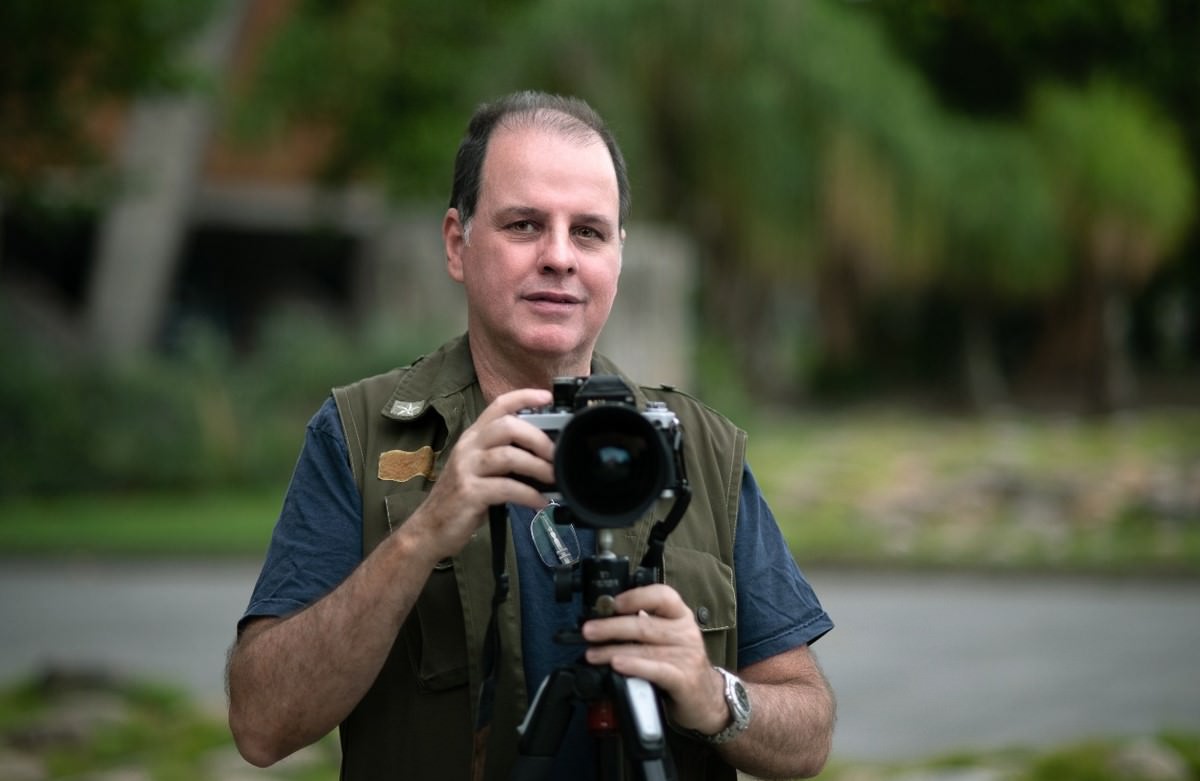