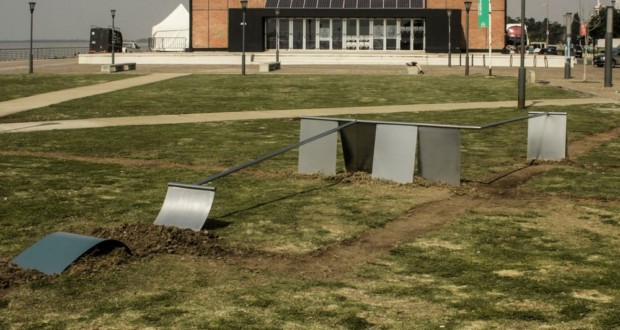 A series of four facilities, which refer to the complex
aquatic environment, will invade the architecture of Oscar Niemeyer.

Fundação Getulio Vargas is on BIENALSUR -Bienal Internacional de Arte Contemporáneo de America del Sur. The initiative connects 32 cities of 16 countries of the world, bringing together more than 250 artists and curators of the five continents with the idea of creating a global network of associative institutional collaboration to eliminate distances and borders and claim the singularity within the diversity.

From 14 November, the exhibition "Yingdong of Dipierro"it is sheltered by the forms designed by Oscar Niemeyer on the terrace of the Centro Cultural FGV. The building, steeped in the tradition of modernist abstraction, is comprised of pieces that engage in random conversations with the space that contains them.

Between the functional and the useless. Between art and ornament. Between abstraction and architecture. So can be defined the work of the artist Marcolina Dipierro. The Yingdong of Dipierro is a series of four facilities or situations which refer to a aquatic complex that includes trampoline, rest area, rays and locker room.

"It is a irreverent tribute, fresh and honest to the great architect Oscar Niemeyer and, fundamentally, to utopian aspirations of a total art that integrates, without distinction or hierarchy, art, design, architecture and urbanism”, highlights the Argentine artist.

With a model completely unheard of, the BIENALSUR seeks to monitor the pulse of the current demands from the participation of artists, curators, collectors, critics, journalists and the general public. With multi-disciplinary events that take place in various cities of the South America, the BIENALSUR allows entities and partner companies comply with the goal of promoting the social responsibility by means of the art and Culture.

The opening of the exhibition will be day 14 November, às 17h. The artistic intervention is open to visitors from the public until the day 15 December on the terrace of the Centro Cultural FGV, in Rio de Janeiro (Botafogo Beach, 186 -Botafogo).

Organized by the Universidad Nacional de Tres de Febrero (UNTREF UNIVERSITY), Since the end of 2015, the BIENALSUR account with the Dean Anibal Jozami as General Director and Artistic Director Diana Wechsler-academic. Is an art biennial, for the first time in the history of the biennial, puts artists and cities of the world in relation to equality. Multidisciplinary, It is distinguished by the originality of having different countries same promoters initiative and the role of universities: 20 universities from all over the world participate in the project. Over 95% of the works that are part of the Biennale were chosen through two international open selections, they received more than 2.500 proposals for 78 countries.

In Brazil, the Memorial of Latin America, in São Paulo, is one of the icons of the BIENALSUR, In addition to the Contemporary Art Museum of Sorocaba (SP), Universidade Federal do Rio Grande do Sul, in Porto Alegre, Universidade Federal de Santa Maria (RS), Brazil's Central and Fundação Getúlio Vargas, in Rio de Janeiro. In the national headquarters can be appreciated works by artists from Madagascar, Argentina, Spain and France. In parallel, the art of Brazilians as Eduardo Srur, Regina Silveira, Shirley Paes Leme, Ivan Grilo, Vik Muniz, José Bechara, Meireles, Hélio Oiticica and Anna Bella Geiger, among others, will compose this cultural exchange, with shows in Argentina and Peru.