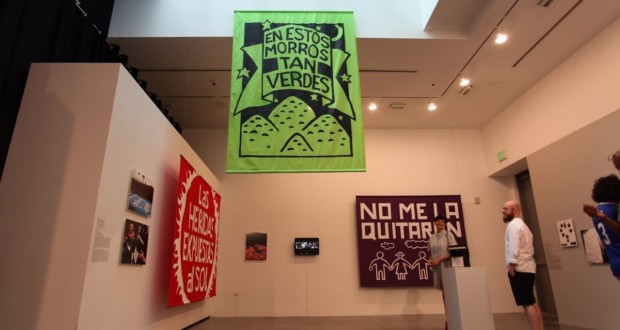 São Paulo, September 2018 -The Bijari studio It presents the work "Counting With Us" in a new exhibition phase Talking To Action, this time in School of the Art Institute in Chicago (United States) until the next day 8 of december.

The show is part of the project Pacific Standard Time LA / LA, begun in 2017 as an exhibition circuit that discuss the relationship between the Latino culture and American cities. "In this roaming project Talking To Action, started a year ago in Los Angeles, We provoke us to rethink how to present this intervention from our records video that had not been visited. In the interest the idea of ​​a multi-screen display arranged on the floor in order to relate to the vertical visual field that gave the intervention regarding the public that moved on the chairlift ", said Mauricio Brandao, to Bijar.

Developed in the peripheral region of the Colombian city of Medellin, the work "Counting With Us" is formed by a set of fabrics with the local community reported that they could be read as a linear narrative or piecemeal, as loose pages of the local countryside. Artists made an intervention in 2011 on the roof of the houses that are on the route of that cable car, drawing attention to the history of the residents affected by the construction of the transport system.

The work is a true study of these community social and cultural transformations.

The next step is to take the "Counting Con Nosotros" for Arizona State University in Phoenix, in the United States between January and May 2019, also part of Talking To Action.

Photos of intervention in Colombia were also included in the show "File-Bijari 1997-2017"Who occupied the gallery Anti-Pop in São Paulo at the end of last year and celebrated 20 years of collective creations Bijari studio. 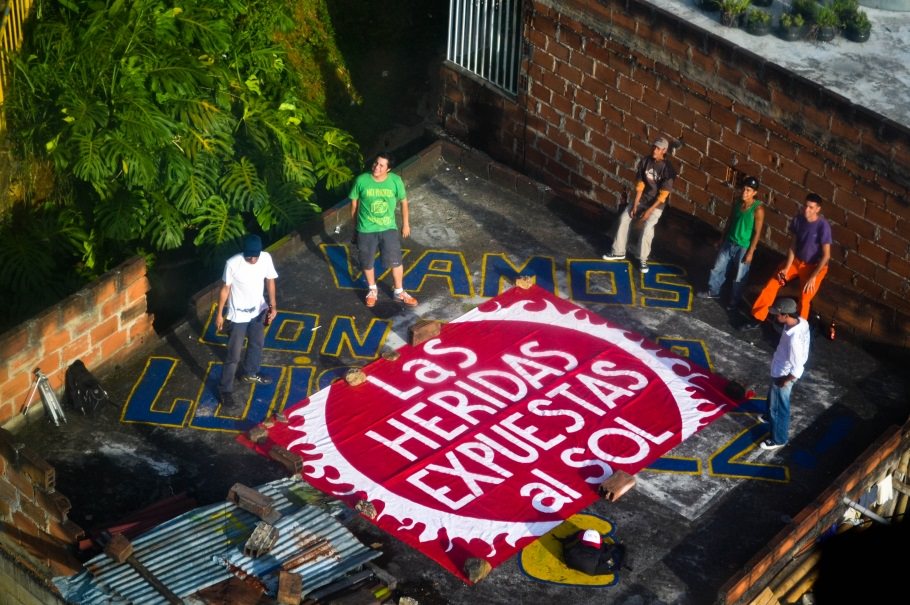 Formed by students of the Faculty of Architecture and Urbanism USP in years 90, the group started work with a focus on graphic design and set design in a space on the street Bijari, Butantã, West zone of the capital. Since then it has been expanding its operations and today develops projects in motion graphics, scenography, virtual reality and video production in unconventional formats and scales. The group is formed by experts in different areas, between artists, architects, designers, planners and videographers and has a consolidated trading platform in parallel to the original work, it being, to a large extent, allowing independence in thinking and produce the artwork.

The Biajri has works exhibited in Kollective Kreativität in Kassel, Germany, in 2006, Normality / Ex-Argentina not Palais de Glace, Buenos Aires, in 2006, MDE11 em Medellin, Colombia, in 2011 and Creative Time in New York, in 2012.

The Bijari has been exploring different visual languages ​​and artistic practices that install in the cracks between the institutionalized spaces of art and the public space of cities. This option underlines the intention of the group by (Re)affirm the responsibility of the artist's role in expanding field, where the aesthetic subjectivities necessarily mix the social engagement and (micro)political.

Creation Center in visual arts and multimedia consists of a team of professionals and visual artists, architects, set designers, designers, planners, video directors and art. Bijari existed 1997 and has a paved research work on convergence between art, design and technology, and has as an object of interest narratives, poetic and conflicts that shape and give life to the urban landscape, is for the conceptual creation of its public works or deliveries to the Brazilian multimedia entertainment market. More information on www.bijari.com.br

Previous: “In Independence Holiday, It was burned the building where was signed the independence of Brazil” says philosopher
Next: Biennial Arts Launch of greater artistic occupation of Latin America stirs center