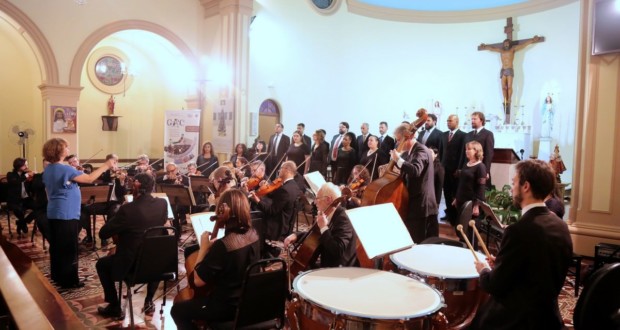 The Camerata Antiqua of Curitiba has free performances week in hospital and church. The programming is part of social projects of the group you want to bring classical music to those who do not have access. The schedule begins on Wednesday (14/03), at 10:30, at the Hospital. On Thursday (15/03) the presentation takes place at night, at 8:0 pm, in the Parish of St. Therese of the Child Jesus, Batel neighborhood.

The projects ' Music for life ', performed in hospitals and 'Concerts in the Churches' have an annual program, spreading classical music in the city. "We seek even closer more and show that classical music is not as far as people usually think", advances the conductor of these concerts, Mara Campos. "Our proposal is to work the music as therapy".

The characteristic and musical proposal of the projects are also reflected in the repertoire of concerts, being a history of the great classical works of foreign and Brazilian composers, representative in his time, such as: Ola Gjeilo (1978), Antonio Vivaldi (1678-1741). Heitor Villa-lobos (1887-1959), Eric Whitacre (1970) and Edmundo Villani-Cortes (1930).

Considered one of the city's musical symbols, the Camerata Antiqua of Curitiba was created in 1974, by maestro Roberto de Regina – today Emeritus – conductor and harpsichordist Ingrid Seraphim. The initial proposal of exclusive execution of Renaissance and Baroque music was enriched with the addition of a repertoire of contemporary domestic and foreign composers, opening up new musical aspects.
Maintained by the Cultural Foundation of Curitiba-FCC and administered by the Curitiba Institute for art and culture-ICAC, the Camerata Antiqua has a track record of achievements and successes that can be explained by the commitment of its members in the continuous improvement of knowledge and musical techniques, leading the group stand out nationally for the quality and excellence of your work. Besides the prestige won, the Camerata Antiqua is also a real school, because many of its instrumentalists and choristers perform individual careers, winning awards in competitions in Brazil and abroad.