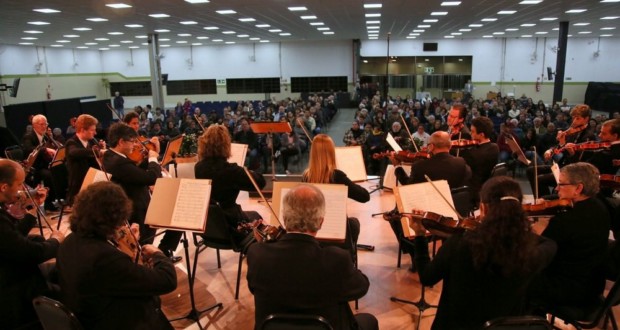 With Rico classic popular music repertoire, the Camerata Antiqua of Curitiba performs under the baton of principal group, Alexandre Razera. The concert which takes place this Friday (13) at 8:0 pm, the church Our Lady of Aparecida, is open to the public and is part of a series of presentations in churches that the group performs throughout the season.

For the program were chosen songs that stand out for being an example of creativity, and rhythmic contrasts and surprising exploration of the possibilities that the instruments can offer, reflecting the characteristic and the musical proposal of the project, such as: Johann Sebastian Bach, George Friedrich Händel, Heitor Villa-lobos, Antônio Carlos Gomes, Mozart Camargo Guarnieri and Edmund Villani-Côrtes.

To conduct the Camerata in this concert was invited Alexandre Razera, principal viola of the Group. Dave Weller is also first violist of the Orchestra of radio-television Slovenia Ljubljana and guest musician of the Mahler Chamber Orchestra, since 2008. He participated in recordings with the Berlin Philharmonic, under the baton of Claudio Abbado, Simon Rattle, Daniel Barenboim, Lorin Maazel, Kurt Masur, Nikolaus Harnoncourt, Trevor Pinnock, Gunter Wand.

Previous: Release Paper: The mystery of envy
Next: Philos session displays the architecture of Norman Foster and the secrets of the Earth