Home / Art / Casa França Brasil will open the exhibition “One on the other: History as a collective body", by artist Thelma Innecco, day 20 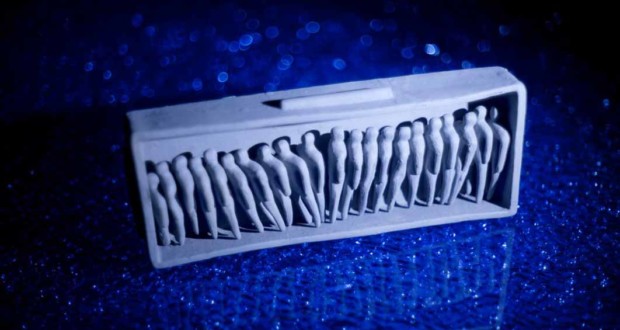 Casa França Brasil will open the exhibition “One on the other: History as a collective body", by artist Thelma Innecco, day 20

THE MINISTRY OF TOURISM, THE SPECIAL SECRETARY OF CULTURE AND FUNARTE, PRESENT THE EXHIBITION

"ON EACH OTHER: HISTORY AS A COLLECTIVE BODY"

“And the pain under whose waves the art of Thelma Inneco makes us sail ambiguously is the same art that brings us hope”
Fernando Batista, Master in Anthropology and doctoral candidate in Culture and Society at the Federal University of Bahia – UFBA

The show features about 20 works by artist Thelma Innecco, video by Caren Moy and curated by Ana Emília Lobo

On exhibition “over each other: History as a collective body" clay is used to reflect humanity and also an act of resistance.. The show, that inaugurates Monday, day 20, has about 20 unpublished works by the artist Thelma Innecco organized in three environments, that reflect the human being in episodes of collective memory, making aesthetic comments about human relationships, through movements across historical time. They are multi-body ceramic sculptures, which install questioning maneuvers on human relationships based on dissimilarities. “Warm affections - collective and individual - share space with serialized bodies, exempted from particularities. Such association brings us closer to each other, reminds us of intimate memories, rescuing in us the sense of an ongoing humanity", reveals the art criticism Ana Emilia Lobo, PhD in Contemporary Art and Culture from UERJ, who signs the curatorship of the exhibition.

Thelma Innecco says that the first work in the series one over the other was “Piledinhos” and that its meaning represents the exhibition as a whole.. “The piece Empilhadinhos shows multiple bodies, horizontal, stacked on top of each other and this series reflects the inequalities, human frailties and helplessness, exposing our own faults, in a theme open to different interpretations, since correlated in any city in the world. An act of resistance and preservation of memory represented by the delicacy of the sculptures that capture our affections”, explains the artist.

“over each other: History as a collective body" also features a short film made in collaboration between Thelma Innecco and English filmmaker Caren Moy. In this work, sculptures are brought into dialogue with historical documents, archive images and reports in order to promote an excavation of memories of resistance. The stories of the Valongo Wharf and the Pedra do Sal and Sacopã quilombos are claimed, among other. "In another key, contemporary global movements are located in the work., como o Black Lives Matter, in which the destitution of civilizing statues gave way to vivid marches of memory and humanity. On tours of the city of Rio de Janeiro, the logic of the sculptures becomes inseparable from the logic of the monument. Celebrated as civilizational frameworks, the monumentalized barbaric acts are remembered only as a counterpoint to the use of common spaces” explains Ana Emília Lobo. “A exposure presupposes a dichotomy. It triggers a reflection on the serialization of bodies and subjectivities, but it also shows what inhabits us of others”, complements curator. 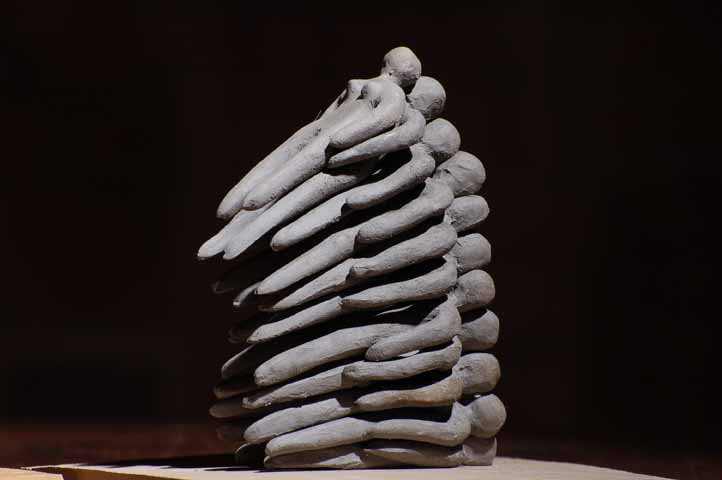 in a third space, the audience is invited to participate. Conducted by monitors, visitors will be able to create their own human sculptures to integrate the exhibition.

“over each other: History as a collective body" stay set in CASA FRANCE BRAZIL until 23 January from 2022. The exhibition has already been in Belo Horizonte at the Funarte MG space in October this year.

"About each other: History as a collective body" was selected by the Funarte Visual Arts Award 2020/2021 – The Dialogue between the Historical Heritage of the city of Rio De Janeiro and the Brazilian present in the Visual Arts, in Architecture and Urban Spaces.

The exhibition is a realization of Funarte, Ministry of Tourism and Special Secretariat for Culture and production of 8 Cultural and Modernist Gallery. 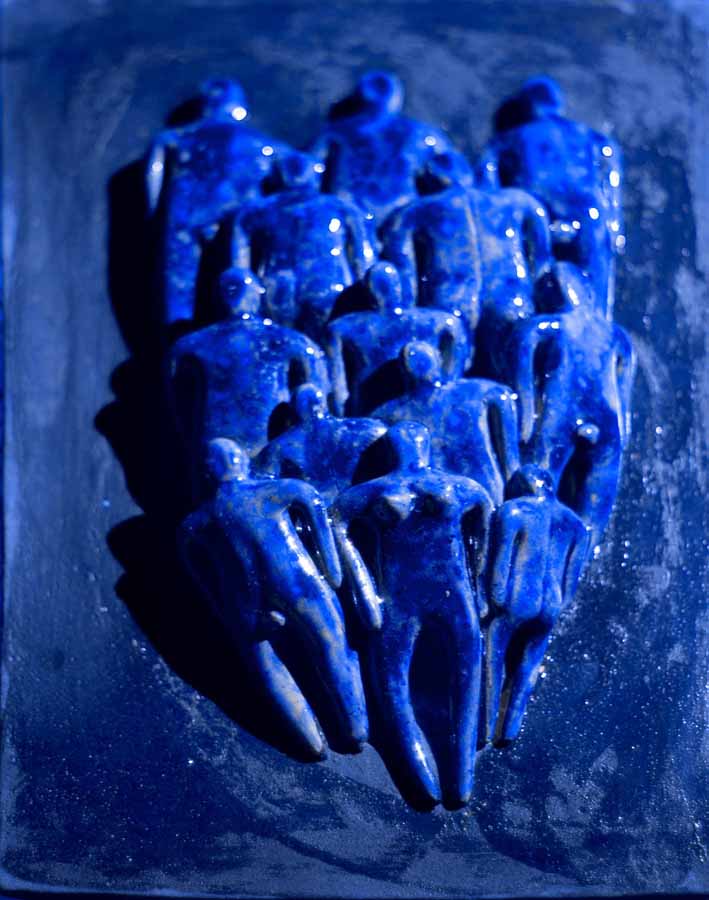 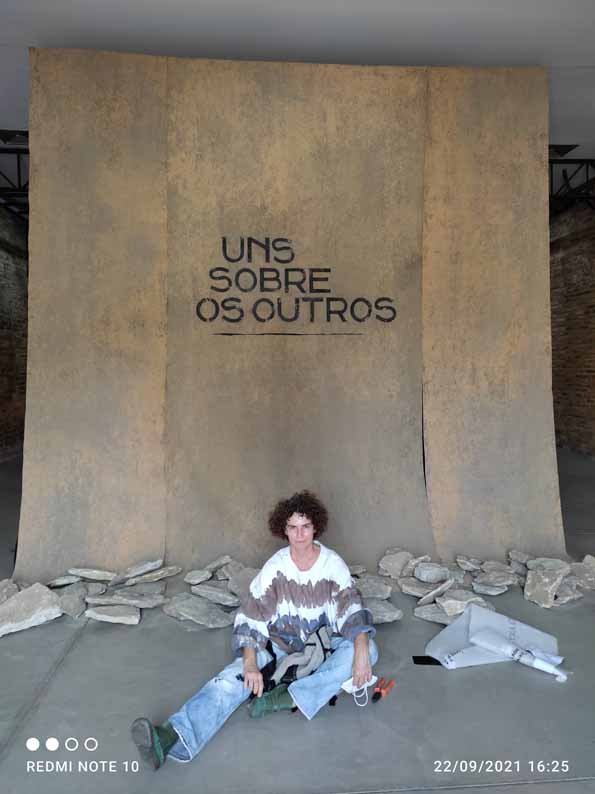 About the artist Thelma Innecco

The artist discovered in 1992 their creative potential at the Center of
Maria Teresa Vieira Arts, in Rio de Janeiro, where was born. In an interesting and effervescent barn of the arts, your choice was clay and, From him, created numerous works and held several exhibitions, one individual and several collectives.

English, has worked in the British and international television market since 1990 and in Brazil since 2009, when did you arrive and where do you live until today. Experienced in all genres, from movies, drama, commercials, documentaries and music video clips, having worked on many of the most successful programs on British television. I spent 15 years working as a cinematographer and camera operator on channels like the BBC, Discovery US, CGTN (China Television), ITV (UK),Channel 4 (UK) WGBH (US) e ABC (US).

About the curator Ana Emília Lobo

Critic and curator, co-founder of the Napupila curatorial research collective and creator of the critical monitoring program Projeto Piloto. She holds a PhD in Contemporary Art and Culture from UERJ, master by the same program, specialist in Art and Architecture in Brazil at PUC-Rio and graduated in Social Sciences at UFJF. Since 2010, has developed projects, courses and research in Visual Arts for institutions such as: EAV Parque Lage, in Rio de Janeiro/RJ; IMS, in São Paulo / SP; Municipal Art Center Hélio Oiticica, in Rio de Janeiro/RJ; Art Museum of Rio, in Rio de Janeiro/RJ; among other. She was a project evaluator for the Ministry of Culture and Caixa Cultural Programs, of Caixa Econômica Federal; and also published the reviews gathered in the book “Terra Incógnita”, organized by Nina Zamapi, and awarded by the Murilo Mendes Culture Incentive Law, in Juiz de Fora/MG.

Previous: 10 artists exhibit their ceramic works at the – how much coffee – Saturday, day 18
Next: Decorative trends to put into practice in 2022