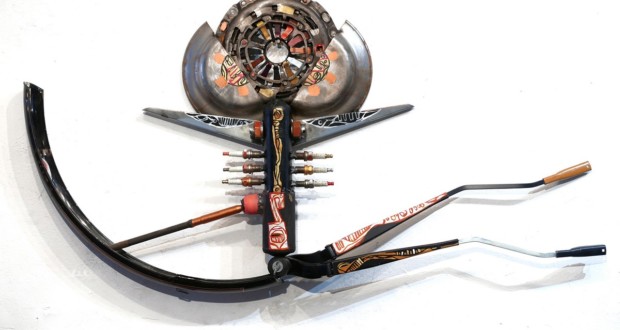 Ciro and Julius, on the one hand the urban brutality, the strong work and heavy, and, the other, softness, the delicacy of nature.

Ciro Schu - Graduated in Fine Arts, He began painting the streets in years 90. Develops an abstract and figurative art, Mixing inspired symbols and spellings in the original peoples of the Americas. Fuses primitive art with contemporary life.

His pictorial images are loaded with imperfect forms, predominating brown, red and yellow as clay derivatives, of land and nature pigments. There is a clear influence of color "ocher" Cro-Magnon humans of rock art. the sculptures, made from recovered materials, not neglect its history. resize, It gives new purpose and broadens their meanings.

Out of Brazil, Cyrus has exhibited his works in Los Angeles, NY, Lisboa, Cambridge, Barcelona, Toulouse, Marbella and Annapolis. Another highlight is the exhibition of the artist Ciro Schu, that exhibits works made with bicycle parts by the occupation Life Cycle, the SESC Paulista Avenue. 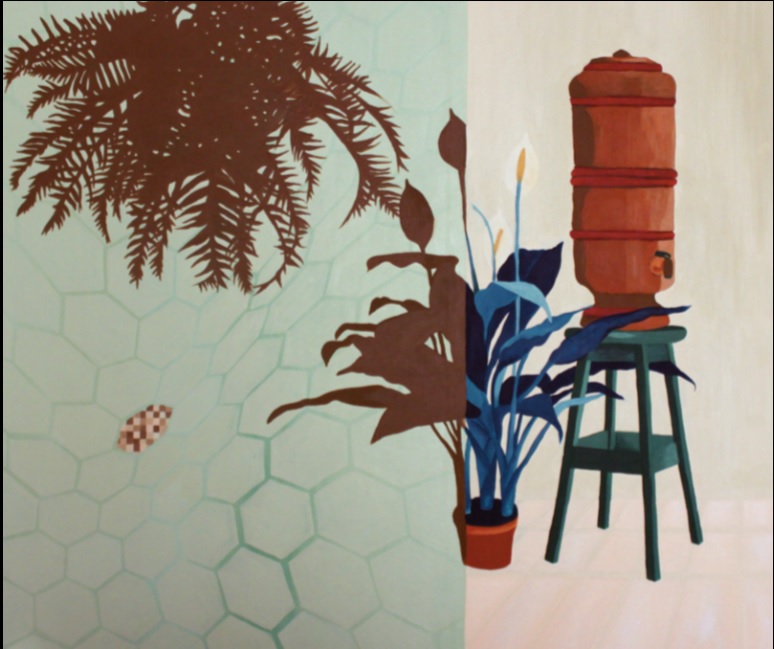 Júlio Vieira - In its current phase, the artist focuses on nature with a color structure and scales arising from the Brazilian biodiversity, predominating various shades of green. So that now, tropical plants and birds are confused with traffic signs, crosswalks, cars, elements and "domestic" (stairs, radios, mud filters, banquettes, etc) in a non-rational spatial distribution.

absurd proportions between these urban elements and nature live with pixelated squares, Chess frames, dotted, triangles and geometric elements that do not make sense from a rational point of view. Julius reinvents these pacatas realities with their colors, shapes and textures.

About the artists, the member of the House Jacarepagua and exhibition curator, José Brazuna, reveals: "I follow the work of both a long time, and I confess that I never imagined this partnership. when I heard, including, I was quite skeptical about. Not only from an artistic point of view, but, also saw no ordinary personality elements between the two. So that now, the art was made to deceive the. And the human being too ". "The result meshed in such a strong way, which for me it was one of the creative partnerships - and human – I'm most excited in 2019. I made sure to get 2020 with this explosion of inventiveness in the House Jacarepagua. Cyrus and Julius are an artistic combination that will give even more to talk about in this new decade. I recommend, be sure to visit ", complements.

Dedicated to the universe Street art, Casa Jacarepagua, created in 2015, held several exhibitions of the scene and has participated in fairs like Fair Part 2016 and 2017, SP-Arte 2018 He Arte-BH 2018. Artists such as Sergio Free, Five, Ciro Schu, Caligrapixo, Gen Duarte and Fabio Biofa already occupied the gallery, which is now installed in a shed of 400m², with a ceiling height of 8m, located in Butantã, district of Sao Paulo – SP.

"The House Jacarepagua has in its DNA the street art. We are proud to be 100% focused in this market, and take pleasure in promoting meetings like these, of disparate origins artists, but, with works that talk among themselves as well ", says Brazuna.

Previous: DILILI IN PARIS debut in theaters on 13 February
Next: Thiago Pethit revive the myth of Orpheus in the Pre-Carnival