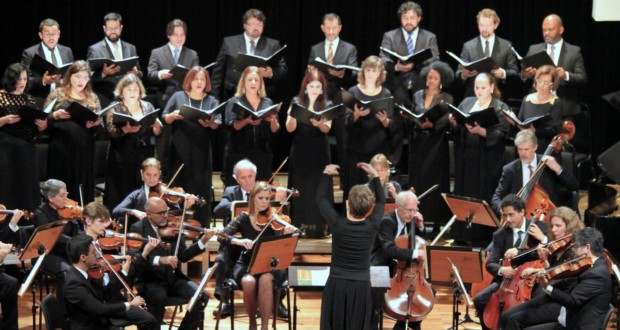 After the presentations at the Sala São Paulo, the main country's concert hall, and in the state saw, in Campos do Jordao Festival, Camerata Antiqua of Curitiba continues its journey into the Paraná. The tour by the Paraná west passes through two cities and also leads presented works in São Paulo. The concerts take place on Thursday (19/7), in Cascavel and Music Festival on Friday (20/7), NO cinema theater Dam Builders, in Foz do Iguaçu. Entries are free.

The letters and Proverbs concert has the regency conductor Mara Campos. In his first presentation, the program set to the inside already filled the chapel Santa Maria. Works are acclaimed by the general public and will be performed by the choir Camerata with 20 singers, technically oriented by Campos, and the orchestra with 20 instrumentalists ropes.

According to Mara Fields, what prevails is the inspiration that all works, in its genesis, They came from letters and proverbs. "This title tells you exactly where we want to, describes a closer form of our understanding that many of the works has been designed for centuries. Then we take you lend and recontextualizamos in our present ".

For conductor, it is important that a group of this size also includes the annual schedule this decentralization,in order to always seek new audiences. "This trip will range from music students on Rattlesnake Festival, but also the general public, so we try a very varied program, for the group shown excellence ", Mara says.

With the trip, Camerata seeks to improve and streamline the artistic life. "The participation of the Camerata Antiqua de Curitiba at festivals in Sao Paulo and Cascavel and Sala São Paulo and Foz do Iguaçu demonstrates the maturity of the Camerata, what very proud our city ", says the president of the Curitiba Cultural Foundation, Ana Cristina de Castro.

The tour through the interior of Paraná is organized by Ministry of Culture and the Municipality of Curitiba through Cultural de Curitiba and Curitiba Institute of Art and Culture Foundation, with support from Itaipu Binacional, hotels Mabu, Communication Paranaense Network (RPC) and Paraná State University (UNESPAR UNIVERSITIES).

Consisting of Choir and Orchestra, Camerata was born in 1974, under the aegis of its founders, the conductor Roberto de Regina - now its conductor emeritus - and harpsichordist Ingrid Seraphim. The initial proposal of exclusive execution of Renaissance and Baroque music was enriched with the addition of a repertoire of contemporary domestic and foreign composers.

Maintained by the Cultural Foundation of Curitiba (FCC) and administered by the Curitiba Institute of Art and Culture (ICAC), Camerata Antiqua has a track record of achievements and successes can be explained by the commitment of its members, leading the group stand out nationally for the quality and excellence of your work.

The Camerata had the command of notable musicians, as the conductor Gerard Galloway and violinist Paul Bosísio, responsible for the long period technical guidance of the chorus and orchestra, respectively, besides Luther Rodrigues, head teacher anos us 1987 and 1988, and Wagner Polistchuk, artistic director 2009 to 2011.

The concern with social issues also marked the performance of the Camerata, over the years. Programs were created "Music for Life", in 1990, and "Feeding with Music", in 1993, with the purpose of bringing the universal language of music to classrooms, factories, havens, orphanages, hospitals and prisons, turning didactic concerts in social integration ingredients.

The Camerata Antiqua of Curitiba has the current official headquarters Chapel Santa Maria. The musical won maturity in four decades of experience is registered in eight disks (long plays) six CDs. The versatility in the performance of early music and contemporary is a fundamental element of a continuous work, true legacy to brazilian culture.