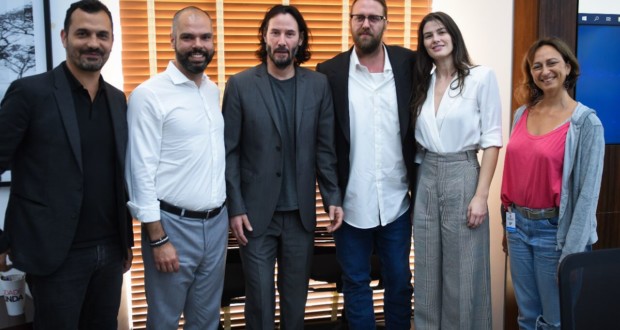 The coming production, which has already started filming in the city, It is the result of joint made by São Paulo Film Commission, Spcine sector responsible for attracting filming for capital. The negotiations began in May 2018, when the producer of the work sought Spcine for information about the shooting of infrastructure in São Paulo.

The negotiations culminated in the visit of actor Keanu Reeves, the writer-director Carl Erik Rinsch and producer Gabriela Rosés Bentancor to Sao Paulo, in April this year. On occasion, producers met with the governor João Doria Jr., Mayor Bruno Covas, the Municipal Secretary of Culture Alexandre Youssef, the chief executive of Spcine Lais Bodansky and the State Secretary for Culture Sérgio Sá Leitão.

The joint to provide the best infrastructure for production without, however, negatively impact the dynamics of the city involved nine municipal, CET, boroughs, Municipal Guarda, city ​​lighting and street cleaning. The footage should involve around 800 people, between staff, cast and figuration. O2 Filmes will be responsible for providing the local production service.

In just three years of operation, the São Paulo Film Commission receives about 1 filming thousand a year and has served more than 2,5 thousand audiovisual works, including international productions as Sense8 and Black Mirror series. In addition to the audiovisual sector, large production economically impact the hospitality segments, feeding and conveying.