Show with works from various periods of the artist's career will be inaugurated on 19 November, na gallery Mul.ti.plo.

Among the surprises, "Multiple Singles" features four new works, which will be revealed only on opening day.

Without exposing in Rio de Janeiro there are about 10 years and a gallery for over Rio 30, Meireles opens shown in Mul.ti.plo Space Art, Leblon. Curated by Paulo Venancio, individual brings objects and pictures of different sizes and materials, produced over five decades. Some parts are new, just out of the oven, and will be presented to the public for the first time. Of key importance in the internationalization of Brazilian art, Meireles is the most renowned Brazilian artist in the contemporary world scene, with works in the Tate Modern collection (London, England), Centro Georges Pompidou (Paris, France), MoMA (New York, USA), Reina Sofia (Madrid, Barcelona), among others. The exhibition "Multiple Singular" open day 19 November (Tuesday), at 19h, with free admission, staying on until 19 January 2020.

At the age of 71 years old, the Rio Meireles made his last retrospective in Rio in the year 2000, when it presented a great show at the Museum of Modern Art. In exposure Mul.ti.plo, that has been gestated for two years, the Brazilian public can see up close an important set of works, dealing with physics concepts, the economy and politics, recurring themes in his work. Between the 16 assembled parts, four are new and are being produced in secret. The surprises are revealed only in the opening day.

"The idea of ​​the show has established two years ago, in my studio, with Paulo Venancio, from an object created for decades that summarizes the installation-performance 'Sermon on the Mount: Fiat Lux ', presented no exact 40 years, in 1979, Candido Mendes in Cultural Center. It was a provocation to the military dictatorship, lasting only 24 hours. Very few people saw. Since then, keep this model and now, finally, complete the work ", explains the artist. "I had also combined an exhibition at Mul.ti.plo with my friend Maneco Müller". Gallery Partner, Maneco gives a clue to work another surprise show: the participation of the announcer Iris Lettieri, whose voice echoed for decades, announcing the departures and arrivals at the airport Galeao, in the river. "One day, Meireles showed me a project, designed in the years 70, that could only be accomplished with only her voice. I wasted no time. I went to meet Iris and have accomplished the desire of Meireles, He speaks with the same impeccable and unforgettable ", explains Maneco.

"The exhibition will present multiple Meireles, they carry the thought of the great artist's installations ", explains the curator. One of them, for example, It is connected to "Meters", paper presented a landmark exhibition at Documenta, em Kassel (Germany, 2002). "The assembled objects and pictures exemplify the thought of great works of Meireles, some being little seen ", he says. The public can check closely also a new issue of notes of "Zero Dollar" (1978-1994).

Considered one of the most important artists of his generation, the award-winning Meireles has works in the collection of one of the largest instances of consecration of contemporary art in the world,a Tate Gallery. The artist exhibited there, alongside Mark Rothko, in 2008. Works by the artist are also part of the Cisneros Collection (NY, Caracas), of the Pérez Art Museum(Miami, USA), Serralves Foundation (Lisboa, Portugal), Inhotim (Brumadinho, Brasil), do MAC (Niterói, Brasil) etc. With successive participations in the Venice Biennale (Italy), Documenta (Kassel, Germany), Meireles brings in further solo exhibitions curriculum at MoMA and Metropolitan, in New York. Currently, the artist is also a major exhibition in São Paulo, which is crowding the SESC Pompeia. "For this individual in Rio, I tried to gather the most significant set of multiples of Meireles, a kind of retrospective, so that the two complement each other ", concludes Paulo Venancio. 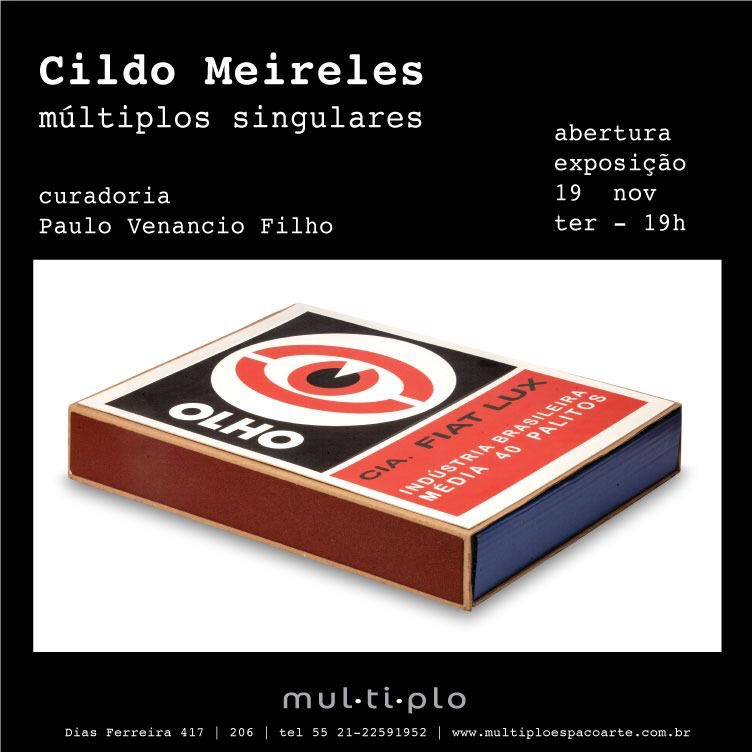 Began his art studies in 1963, the Cultural Foundation of the Federal District, in Brasília, directed by Peruvian painter and ceramist Barrenechea (1921). You begin to realize designs inspired by African masks and sculptures. In 1967, It moved to Rio de Janeiro, where he studied for two months at the National School of Fine Arts (Enba). During this period, creates the Virtual Spaces series: Cantos, with 44 projects, in exploring space issues, further developed in the works Virtual Volumes and Occupations (Both of 1968-1969). It is one of the founders of the Experimental Unit of Modern Art Museum of Rio de Janeiro (MAM/RJ), in 1969, in which teaches to 1970. The political character of his works is revealed in works such as Tiradentes – Totem-Monument to Political Prisoner (1970), Insertions in Ideological Circuits: Coca-Cola project (1970) and Who Killed Herzog? (1970). The following year, travels to New York, where you work in the installation Eureka / Blindhotland, Meat without salt in LP (recorded in 1975) and inserts series circuits Anthropological. After his return to Brazil, in 1973, begins to create sets and costumes for theater and film and, in 1975, becomes a director of Malasartes art magazine. Develops series of inspired works on paper money, as Zero Cruzeiro and Zero Cent (Both of 1974-1978) or Zero Dollar (1978-1994). In some works, explores questions about units of measurement of space or time, as in Meters Bread (1983) or sources (1992). In 2000, Cosac publisher & Naify launches book Meireles, originally published, me me London 1999, pela Phaidon Press Limited. Participates in the Venice Biennale, 1976; Paris, 1977; São Paulo, 1981, 1989 and 2010; Sydney, 1992; Istanbul, 2003; Liverpool, 2004; Medellin, 2007; and Mercosur, 1997 and 2007; in addition to the Documenta in Kassel, 1992 and 2002. Has retrospective of his work made in the IVAM Center del Carme, in Valencia, 1995; no The New Museum of Contemporary Art, in New York, 1999; na Tate Modern, in London, 2008; e no Museum of Fine Arts de Houston, 2009. Receive, in 2008, the Velázquez Prize for the Plastic Arts, granted by Spain's Ministry of Culture. In 2009, It is released feature film Meireles, about his work, directed by Gustavo Moura. In the same year, exposes in the Museum d'Art Contemporani de Barcelona, Spain, and MUAC - University Museum of Contemporary Art, in Mexico City. In 2011, performs Occupation Meireles, curated by William Wisnisk, at Itaú Cultural, São Paulo. In 2013, exhibited at Centro de Arte Reina Sofia, Palace Velásquez, curated by João Fernandes, in Madrid, Spain; and also in the Museum of Contemporary Art of Serralves, Porto, Portugal. In São Paulo, presents shows in Maria Antonia University Center, curated by John Banner. In 2014, exposes in Milan, Italy, no HangarBicocca, curated by Vicente Todoli. In Brazil, exhibition at Galeria Luisa Strina, São Paulo; Denmark, after Kunsthal 44 Møen. In 2015, exhibits at Galerie Lelong, New York, USA. In 2019, opens a major exhibition "glimpsing", the SESC Pompeia, São Paulo. 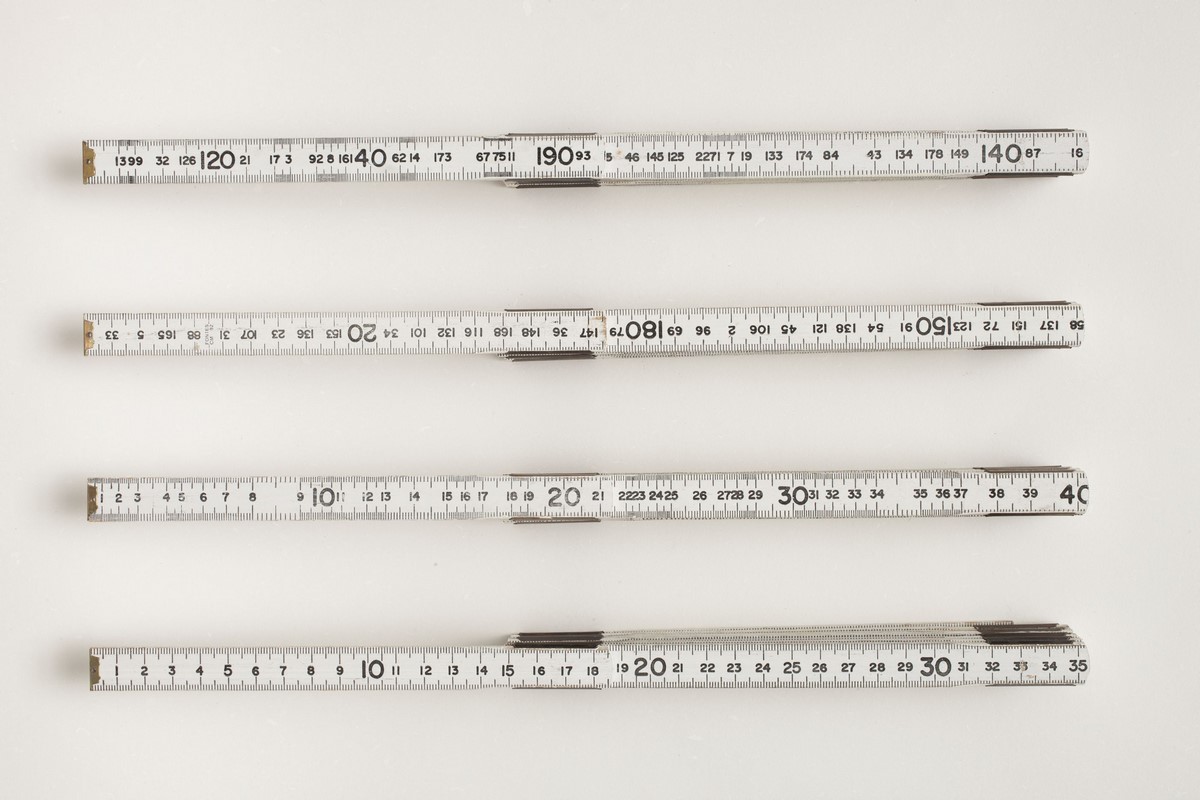 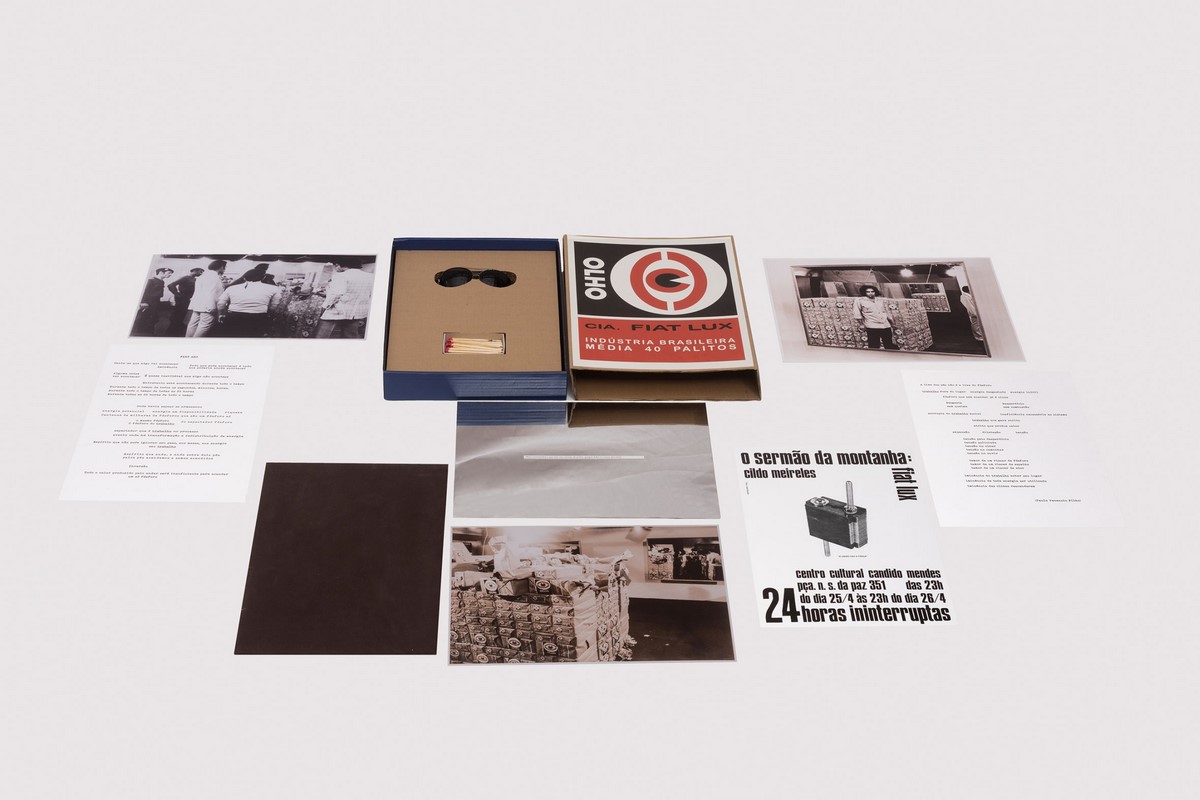