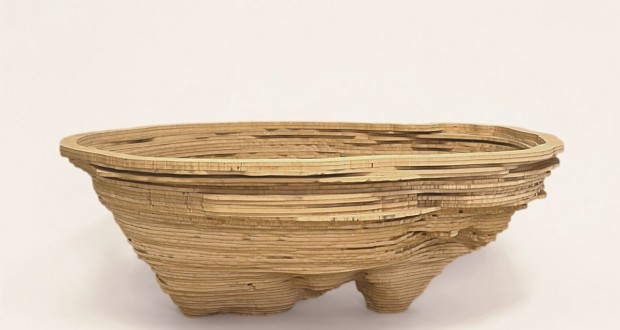 12 March 2019 – A remarkable collection of 45 works of 33 artists Latin American contemporary forms the donation made by Patricia Phelps de Cisneros Collection (CPPC) to Foundation Museo Reina Sofía. This gesture will allow the Museum's collection is significantly enriched, while boosting the research project being conducted on the artistic movements that emerged in Latin America since the late 1960 until now.

The works, which will be deposited at the Reina Sofía to be part of your collection, They belong to the framed chronological framework between the years 1960 and present, but they are of special importance for the years 1990 and the first years of the century. This contemporary character is precisely the least represented in the current Latin American art collection of the Museum and, however, reinforces an interest of the institution, as was evident at the recent exhibition Fictions and territories. Art reason to think the new world (2016-2017), organized by the Reina Sofía with own resources.

The 33 gathered artists – mainly from Brazil and Venezuela, although there are authors from Argentina, Colombia, Mexico and the US (Latinx) – They represent a generational diversity and characterized by cultivating a broad spectrum of artistic practices: painting, sculpture, installation, graphic work, drawing, artist books, photo collage, among others.

The Patricia Phelps de Cisneros Collection We have made a generous donation à Foundation Museum in 2018, formed by a set of creations focusing on stories about gender identity, territory, memory and language. 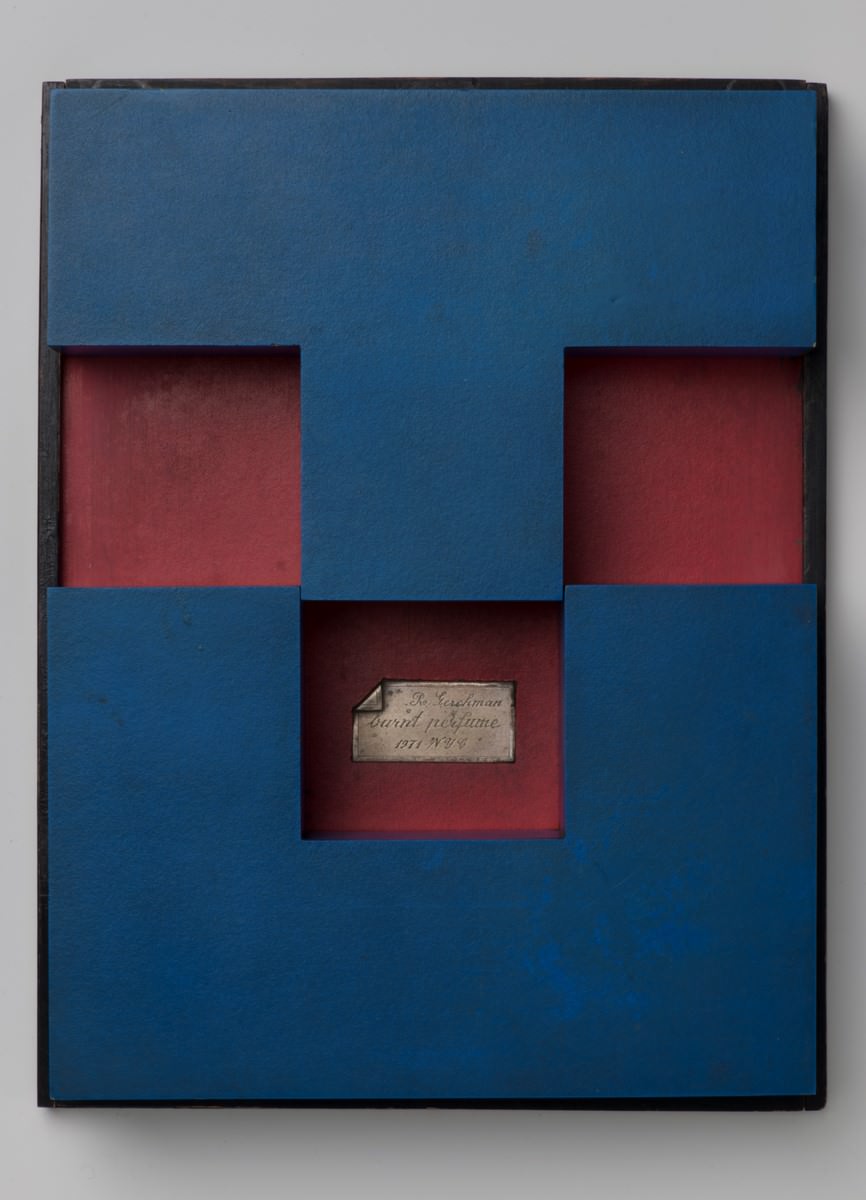 The donation: generational diversity and variety of artistic practices

If we start reviewing the authors based on their countries of origin, we highlight sigfredo Chacón (Venezuela, 1950), with his works Autoportrait (1975) and Drawing no title (1987) that combine painting, graphic design and design, and help to establish the aesthetic break marking the Venezuelan conceptualism.

A key figure of the Venezuelan avant-garde scene, whose work escapes easy categorization, is Hector Fuenmayor (Venezuela, 1949), which is represented in the donation of four works: or triptych Cruz and fiction (1978), the installation Death and Resurrection (1974-1994), Right and Wrong (1983-1990) and the book-art Miranda in the Carrack, some transformations (1977).

For his part, Roberto Obregón (Colombia-Venezuela, 1946-2003), explores conceptual approaches based on his experience as a botanical illustrator. Using a variety of techniques, including photo, watercolor, photocopying and collage, his serial works are a record of nature. In on Eme, their later series Masada project, the artist deals with suicide themes, social violence and depression.

Their Works Sketch for a natural history of Eden (1994), José Gabriel Fernández (Venezuela, 1957), uses everyday materiality: wallpaper with floral nuances brought on their graphite foliage bathrooms and men to emphasize that the construction of sexual identity is closely intertwined with spatial policies. No board 3, made in 2006, also part of the collection donated.

The work of Jaime Castro Oróztegui (Venezuela, 1968) based on his training as a sculptor and his interest in reflecting on the landscape and its role throughout the history of art. In his artworks Long Island, There is no Mountain Higher (1998) and Landscape 12.2001 (2001), it addresses the multiple ways of representing the landscape through a manipulated materiality, where technology and raw materials create new interpretations of space. 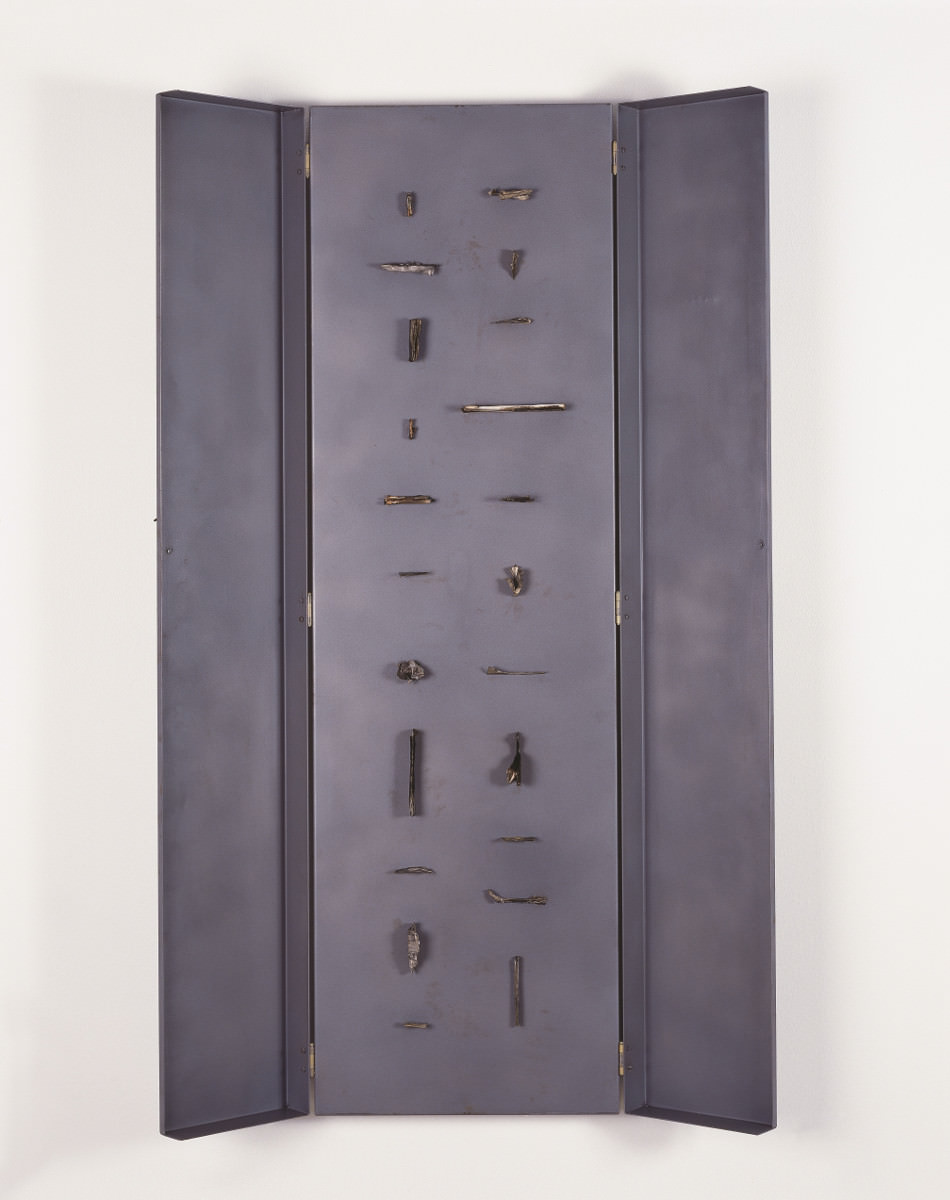 Interested in spatial relations, Alí González (Venezuela, 1962), uses the facility to question the museum space and a new order to open channels of communication. His work No title (2000) is a chair covered swing by a network of ropes, which can be interpreted as an embodiment of the restrictions imposed by the social construction of gender.

The set also includes works donated by artists interested in sculptural trials, such as Oscar Machado (Venezuela, 1953). In a part of his series taking root (1996-1997), iron wire and the cement serve as tools to question the space, showing the lightness of iron and immobility of the cement weight.

The artist concerned with the mobility of the material, Magdalena Fernández (Venezuela, 1964) It is represented in this set with one of his “furniture designs”, titled Mobile cube (1998) in which rows and aluminum structures encourage physical interaction with viewers.

Augusto Villalba (Venezuela, 1963), It offers reflections on materiality and its function, both artistic and social through a pictorial language that seeks to unite the found objects and everyday visual noise. Her, the color is a significant element in his work and No title, Jazz Series (1997), it uses precisely color as sculptural strategy.

In turn, Arturo Herrera (Venezuela, 1959) uses visual fragments to create collages, sculptures and murals that are between readability and abstraction. The trajectory of the artist is represented by a collage-drawing, Untitled (2004), on what, almost sculpturally, plays with the job presence and absence, with occupied and empty space.

Known for his long work on mental illness, madness and otherness, Javier Tellez (Venezuela, 1969), is the author of six colorful posters Cactus prints, the series A season in hell (1997), depicting scenes in the Venezuelan prison Tocuyito. Each poster has a slogan to promote the country's tourism industry over the years 70. The tension between image and word reveals the exclusion mechanism.

Among Brazilian artists whose work was donated, Rubens Gerchman (Brasil, 1942), painter and sculptor deeply influenced by Concrete art and Neo-concrete and connected to the psychedelic art and pop art. His works deal with various themes, of urban isolation and alienation, to the geopolitical location of Latin America. Donated work is Burnt perfume (1971).

Angelo Venosa (Brasil, 1954) It is one of the few sculptors who took part in the call “generation 80”, a move that revised the imagination and spontaneous gestures of the artist mainly through painting. The part is included in the set Autoportrait (1999).

In your work Untitled (1992), Marcos Coelho Benjamin (Brasil, 1952) uses materials used to rough and worn surfaces to create three-dimensional sculptures and installations, thus emphasizing the popular culture of Minas Gerais, its tradition through craftsmanship and reuse of materials found.

Ester Grinspum (Brasil, 1955) search in his work, both sculptural and in their drawings, an interiority which opposes the clarity and constructive logic linked to modernity. Employs a premeditatedly subjective vocabulary, comprised of both icons of your own creation, such as those of art history. Two works on paper Untitled 1997 make the contribution to the donation.

Valeska Soares (Brasil, 1957) It stands out in the Brazilian vanguard since the late 1980 the early 90. Since 1992, his work has been positioned on multiple platforms, focusing on issues such as global art world, Geography, cultural and national identity, discipline or form. Untitled (from Detour) (2005) and Wishes 22 (1996) are the creations of this author that become part of the Museum's collection.

The engraver and sculptor Mauricio Ruiz (Brasil, 1958) interrogates itself through the matter and that this gives it color, inquiring about the mechanisms that activate to recognize the, is in our traditions, in a community, or simply as an individual as it appreciates in works such as Untitled (1995).

Painter, designer and engraver, Paulo Pasta (Brasil, 1959) It is one of the great painters of the prominent scene of São Paulo in 1990, working abstraction from an emotional perspective and poetic. His is the screen the title, from 1994.

The artist Fernanda Gomes (Brasil, 1960) uses materials leftovers, everyday objects or furniture discarded and his works stand out for being closely linked to the space in which they are deployed. In the case of the work Untitled, from 1994, she used paper and wire.

The painter and sculptor Nuno Ramos (Brasil, 1960) It is a multifaceted artist who uses different media and materials that combine engraving, painting, photography, installation, poetry and video. The book-art Ballad (1995) It is an example.

On the other hand, Rosangela Renno (Brasil, 1962) uses photographs from public and private archives to question the nature of the image and its symbolic value, as in Untitled (XXYX) -in forgotten;, from 1994. Very interested in the discarded image and ownership, Rennó tries to mimic the collector habits bringing together different images.

Edgard de Souza (Brasil, 1962) is experimenting with the creation of three-dimensional objects, drawing, engraving and painting. Produces objects and sculptures as Untitled (1997) They are exploiting the human form, approaching a surreal imagery that causes a feeling of familiarity and strangeness.

In Untitled (2004), Paulo Climachauska (Brasil, 1962) combines drawing and painting and to inquire about the relationship between art, economy and society and postulates that the line is not a trace, but a mathematical sequence that allows us to reflect on the connections between the value of the artistic work and its social function.

Rosana Palazyan (Brasil, 1963) experiments with multiple techniques that cross different scales – Since embroidery and drawings to performances and urban facilities – to create works that explore how the narrative is built after the small details. In Untitled (1994) used burned tissue and embroidery.

The work of Iran do Espirito Santo (Brasil, 1963) shows a subtle subversion through the minimalist abstract elements everyday. As in Tomogramas (1995) and Untitled (1997), Holy Spirit deals with the tactile attributes of the materials chosen and its sensual contours of simple abstract shapes in space.

Exploring the dichotomy between the single and series – between continuous and discontinuous – the sculptural paintings Marcia Thompson (Brasil, 1968) style Transparent (1996) require a non-uniform look, able to perceive the uniqueness within a total apparently homogeneous.

José Damasceno (Brasil, 1968) He managed to create its own language without renouncing to the influence of his predecessors, as Lygia Clark, Helio Oiticica or Meireles. It combines a sensory and interactive poetic with a personal universe, marked by his references to surrealism and his frequent use of humor. It is part of the donation to the works 2 studies 1 lost dimension (1996) and A letter (it) (2005).

The works of the Argentine Eduardo Costa (1940) included in this group – white wedge (1998-1999) and Black Cube (1998-1999) – correspond to the proposals of the artist's painting, creating your calls “volumetric paintings”, sculptural forms built exclusively with paint.

Miguel Angel Rios (Argentina, 1943) It combines a strictly conceptual approach to an aesthetic “handmade” meticulously constructed. In his untitled work of the year 1994, this artist transforms the cardboard in a space full of lines, thereby converting, the daily movement in a complex territory.

his compatriot Fabian Marcaccio (Argentina, 1963) uses digital and industrial techniques. In the work Dead, No No model #2 (1992), fossiliza the target, mixing silicone oil with.

O Colombia Danilo Dueñas (1956), on the other hand, experiments with found materials and objects (readymades) to create pictorial constructions of multiple readings, to accompany harmoniously in their exhibition context, can question, and evoke the viewer off balance. This is the case of The sower (1991) or speeds (2005).

The Mexican work José Dávila (1974) originates in symbolic languages ​​that work within the history of art and visual culture Western. In works such as in its intervention book S,M,L,XL (2000), these languages ​​are reconfigured as contradictory relations, leading to correspondence between form and content to its limit.

Finally, we will quote the work Untitled (1997), consisting of non-traditional materials to create optical illusions of motion, the US Teresita Fernández (1968). The artist is known for his sculptures and large-scale public facilities, made of various materials, like wires, aluminum, acrylic, plastic or glass beads.

Headquartered in Caracas and New York, SCLC's mission is to promote a greater appreciation of diversity, sophistication and variety of Latin American art, and the study of Latin American Art. The SCLC achieves these goals through the preservation, study of presentation and Latin America material culture, ethnographic the contemporary.

The activities include exhibitions of SCLC, public programs, publications, grants for academic research and artistic production. The site collection (www.coleccioncisneros.org) It was created to provide a platform for debate on the contributions of Latin America to the world of art and culture; his inspiration and starting point is the Patricia Phelps de Cisneros Collection, but their goal is the discovery and its mission is to build a multilingual virtual network of people and ideas.