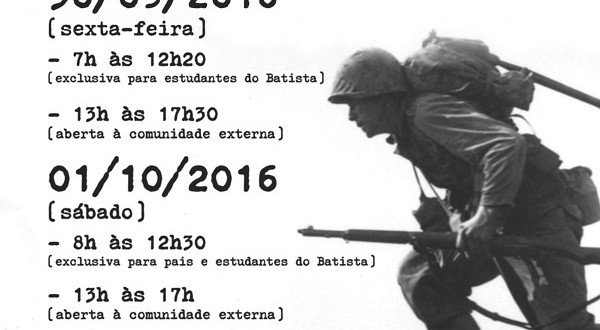 Sad milestone in the history of mankind, World War II is a milestone considering its consequences in all areas of knowledge to our days. Because of this issues on this subject are recurrent and essential in institutions of the universe school, like the ENEM.

With this focus, the Baptist College Miner performs the project "perspectives on war and peace: the Humanities ', consisting of an exhibition to present and do reflect on military technology and humanitarian impacts of conflicts of the 20th century, especially the second world war. This year, the exhibition will take place in the days 30 September and October 1 on Forest drive (New Bridge Street, 443). On Friday (30), from 7:00 to 12:20, the visitation will be exclusive to students. Between 1:00 pm and 5:30 pm, open to the public. Already on Saturday (1/10), the general public can visit for free shows, between 1:00 pm and 3:00 pm. And students between 8:00 and 12:30.

The exhibition brings together one of the largest collections in the country provided by collector. Visitors will have the opportunity to see some more of the history of 25 1000 Brazilians that fought against Nazi-fascism in 1944, cars of world war, Jeep of the Brazilian military regime (the 1970), car of the Viet Nam war, medical equipment, individual soldiers equipment, pilot uniform, artillery piece, iconic weapons, among others.

"The aim of the exhibition is launching perspectives on important historical facts of the contemporary world, questioning the role of warfare in the construction of the modern world and discussing the military development and its impacts on the daily life of human beings. From there we understand World War II, the relationship between civil society and the military governments in Brazil during the 1960, 1970 and 1980 and, yet, understanding the role of the UN ", Explains Professor Wany Borges, responsible for the organisation of the project.