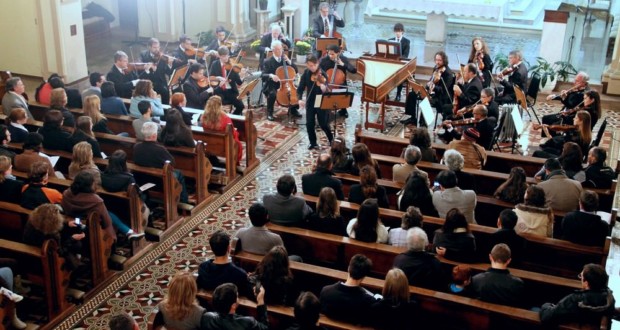 The last performance of this year's "Concert in the churches", the Camerata Antiqua of Curitiba, happens this Friday (2), at 8:0 pm, in the Church of the Redeemer. The concert, open to the public, is part of the celebrations of 150 years of the Redeemer's Lutheran Community. The Regency is Alexandre Razera.

Regent – Alexandre Razera began his musical studies in the Escola de Música de Piracicaba. In Brazil he studied with Celia and Elisa Fukuda. In 1998 was awarded with a scholarship to integrate the Academy Karajan of the Berlin Philharmonic, where had the guidance of Wielfried Strehle. Held concerts and recordings under the baton of conductors such as Claudio Abbado, Simon Ratle, Daniel Baremboim and Lorin Maazel. He studied with Ulrich Knoerzer at Berlin University of the arts. He served as first violist of numerous orchestras, as the Slovenian radio and television Orchestra, OSESP, OSUSP and OSB. Worked by the Lucerne Festival Orchestra, Berlin Philharmonic, Mahler Chamber Orchestra and various camera music groups around Europe.

In Brazil, Razera integrates the Faculty of festivals all over the country, as the Festival of Campos do Jordão, Music workshop of Curitiba, CIVEBRA (Brasilia) and FEIMEP (Piracicaba). Currently, In addition to the solística and chamber music activity, is the first violist and Orchestra of Camera tester of Curitiba.

Previous: Design – Artistic Production, Step by step 12 of how to draw by Rosângela Vig
Next: LAST WEEK TO VISIT THE MORGAN-EXHIBITION AT THE CULTURAL CENTER OF POST SNELL