Cultural current moves Curitiba with Marathon of shows and other attractions 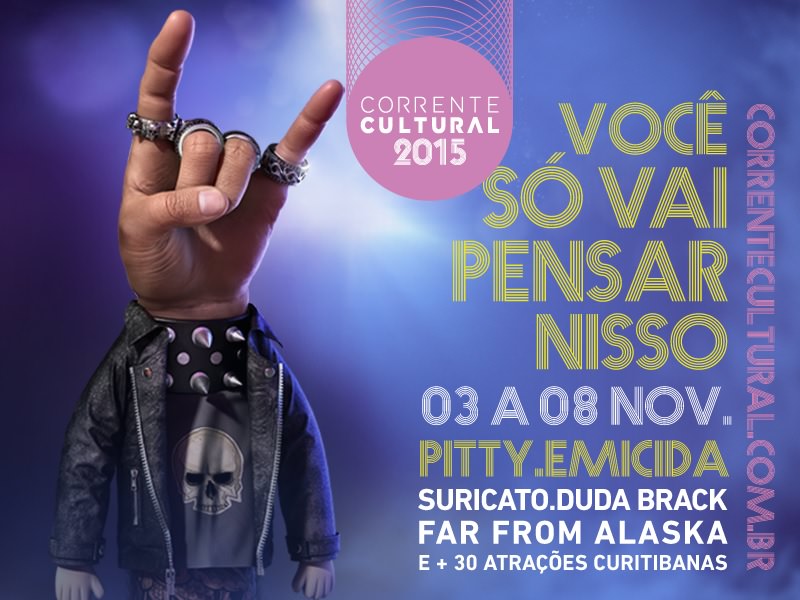 Hundreds of shows and artistic attractions take care of Curitiba in the week of 3 to 8 November. The Cultural Current 2015 is being organized by the Cultural Foundation of Curitiba to provide an intense stage outdoor programming, squares, theaters and cultural centers. The major attractions are reserved for the weekend, days 7 and 8, with shows of national artists and 24 bands and musical groups curitibanos chosen through public selection.

Emicida, Pitty, Meerkat, Far from Alaska and Duda Brack are the national attractions that go up to the stage Hard Rock Cafe Curitiba-Mouth Bloody and FM-free world-Ruins, the two main stages of the chain this year. Programming gains weight too with the bands, groups and artists curitibanos selected and hired by the FCC, representatives of the various strands – rock, jazz, folk, MPB, among others. Are they: Wind-based Orchestra, Big Time Orchestra, Cefa, Out and about, Djoa, Du Gomide, Shoe Stuck Gafieira Orchestra, Jenni Mosello, Leash, Lucian Araújo, Machete Bomb, Monreal, Naked Girls and Aeroplanes, Belgian Girlfriend, The Brothers Carrilho, Pietro Domitian, Braveheart, Relespública, Rodrigo Lemos, Sara 572 and Trombone of Fruits.

Is also in the band the Woodcutters programming Antárdida, winner of the Living Latin Rock festival, sponsored by Hard Rock Cafe Curitiba, one of the sponsors of the current, along with Coca-Cola, Rolling Stone Magazine, Spotify, Banco do Brazil and World Free FM. A "surprise attraction" will still be announced to play with the Rope-based Orchestra.

In addition to occupy the stages of Mouth Bloody and the ruins, the attractions are divided between the stages of Spain Square, London theatre and Theatre of Curitiba (TUC), In addition to the Electronic Tent, that will be assembled in the square 29 March. In this location, four DJs, also chosen by public selection of the FCC, take turns in animation. Are they: Bouar airport, Nomad Magush, Claudia Bukowski and Kaka Franco.

The London Theater will be reserved for shows of stand-up comedy, While the Memorial of Curitiba will be taken by Vinyl fair. There will be gastronomic fairs along the stages of Mouth Damn, Ruins and in the square 29 March. The chapel Santa Maria will be integrated into the programming with several musical attractions, including Opera concerts.

Resources -The Town Hall and the Cultural Foundation of Curitiba the Curitiba Cultural Current with the participation of important sponsors and support from institutions such as Sesc, Goethe Institut, Instituto Cervantes, Bienal Internacional de Curitiba, Radiola and Gepetto Pizzeria. "To pay for the costs of the current Cultural 2015, adopt the policy in which the municipality is responsible for the payment of the infrastructure and the paychecks of city bands, While the national attractions are paid with the investments of the sponsors ", explains the President of the Cultural Foundation of Curitiba, Marcos Cordiolli.

For the current Cultural 2015 will be invested, by the city of Curitiba, approximately, R$ 600 1000 between the caches of the expenses the city musicians, infrastructure and communication. Each band selected will receive a fee of R$ 3 1000 and the DJs, of R$ 1,5 thousand.

"Despite financial difficulties and the time of economic downturn for which the country is, the city is still considering the Cultural Current a key initiative for culture of the city. Some partners that participated in the previous editions weren't able to invest this time, What required a greater effort from the FCC to seek resources with new sponsors ", says the Superintendent of Cultural Foundation, Igor Lamb.

Programming grid, with all the attractions, locations and times, will be released next week and will be available on the website of the Cultural Current- correntecultural.com.br.