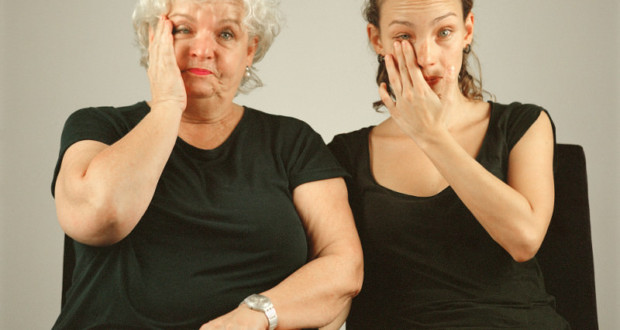 The Studio Gallery announces the opening of the exhibition "Devastation", on 23 of June, Friday, from 19 hours, with photos of artist Paula Huven mining. The Series, composed of 13 photographs 100 cm x 100 cm, 20 Photo contacts documents and records of the process of the work, will be presented at the exhibition and the book, portrays the silent dialogue of glances between mothers and daughters through a mirror.

On the same night, will ship your new book of the same name in an elaborate Edition with critical texts of Maria Angelica Melendi and Carolina Junqueira dos Santos.

In "Devastation", as well as in other works, the artist makes use of photography as a device capable of awakening dates, making the image production the own place of experience. Mother and daughter sit in front of a one-way mirror, where is the camera. The time that follows is intended for the exchange of glances between them, While the artist, behind the mirror and without being seen, shooting. The title refers to the Lacanian concept whereby devastation is hard to plot that makes the child separated from his mother to be woman. The photographs of the artist invite us to the puzzles of these relationships between mothers and daughters, in the intimate and silent dialogue of glances. Paula Huven addresses a fundamental issue of female subjectivity – mom and your love – poetic and conceptual form.

"Devastation" is a project done exclusively by women: the artist, the authors of the critical texts, the graphic designer and producer, the Executive producer.

The series received the prize Funarte Women in the Visual Arts 2013 and was a finalist in the awards Photo Visa Russia and Conrado Wessel 2015.

Paula Huven was born in 1982, in Belo Horizonte (MG) where now lives. Master in Contemporary Art and culture by the Universidade Estadual do Rio de Janeiro, with free training from the school of Visual Arts of Parque Lage RIO DE JANEIRO. Currently PhD student from the school of fine arts at UFMG.

Held solo exhibitions "ordinary days" in the Photo on the agenda (Tiradentes, 2017); "Devastation" in the.. Gallery (Belo Horizonte, 2014) and "what unites us, What separates us ", Ibeu Gallery, integrating the FOTORIO circuit 2013.