Home / Art / From romance to comedy: check out the best eBook deals 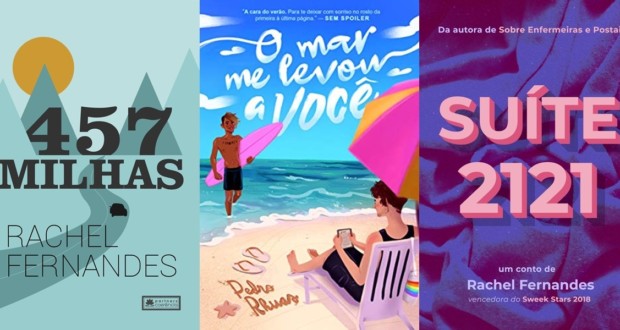 From romance to comedy: check out the best eBook deals

Sweek Stars winner 2018 stands out with its stories on sale

To start the week with several reading suggestions, we listed three eBooks by Rachel Fernandes that are on offer on Amazon and two other titles by national authors, and, increasing your virtual library on Kindle. Stories written by artists range from romance, romantic comedy and some dramas.

457 Miles – Rachel Fernandes
We follow the story of Emílio Andolini and Pietra Salles, two advertisers who hate each other spending hours in the same car traveling to Punta del Este (Uruguay), in which both compete for the same advertising award. The plot stands out, when the writer proposes to approach taboo and delicate subjects, like sexual violence, abortion and late adoption, but it intensifies the narrative by raising reflections on the importance of knowing someone beyond appearance.
Link: www.amazon.com.br/457-Milhas-Rachel-Fernandes-ebook/dp/B08GLWPWZY

Concrete Romance – Aimee Oliveira
An untrained Chihuahua, a store being demolished, the store's breaker and Olivia Liveretti have a lot in common, but it's on a cloudy Monday afternoon, that something strange happens and brings these four elements together. As the hardware store is demolished by Jonas Caruso, reasons appear so that the owner and her store will never be the same.
Link: www.amazon.com.br/Romance-Concreto-Aimee-Oliveira-ebook/dp/B07N11JBWD

About Nurses and Postcards – Rachel Fernandes
We accompany Miguel, a grumpy executive who, after rolling the office stairs, needs the care of the general services assistant called Aurora, who accepts to be the “nurse” of the executive so as not to lose his job. It is with good doses of humor that this story will teach a lot about the importance of human relationships.
Link: www.amazon.com.br/Sobre-Enfermeiras-Postais-Rachel-Fernandes-ebook/

The sea took me to you – Pedro Rhuas
Upon returning to Brazil to spend the summer at the parents' hostel, Matias finds more free time in the sea of ​​Canoa Quebrada, no Ceará. Falling in love or relating to someone was not in his plans, not so far. In an afternoon, his destiny is linked to that of a mysterious boy to whom he is immediately attracted. That situation had two endings: nothing or everything they never imagined.
Link: www.amazon.com.br/mar-me-levou-voc%C3%AA-ebook/dp/B08W9XM3VD

Suite 2121 – Rachel Fernandes
The story takes place on Valentine's Day and tells the story of the maid Lorena, a woman who decides to take a peek into the presidential suite of the hotel where she works, but ends up being trapped in the bedroom and is surprised to find her ex-boyfriend handcuffed in bed. Proposing to raise issues about relationships, the author demonstrates how shared bad luck can be a great benefit for a dull holiday.
Link: www.amazon.com.br/gp/product/B08PVNRHMH