During all weekends in May, from sixth to sunday, at various determined times, “E-CENA” happens, SHOW ONLINE THEATER ". One of the festival's goals is to get out of the “theater bubble” and expand, to other networks, the collection of donations for the “APTR NEXT TO THE THEATER WORKER”.

The campaign has already benefited 500 professionals and their families, with a VR card, in the amount of R $ 500.00. The goal is to achieve 1.000 contemplated. In all actions, there will be a Sympla QR code or link, by which the public can make its contribution.

Theater is live, a unique and singular experience. With the momentary impossibility of offering a face-to-face event, or E-DINNER, in a relaxed and uncluttered way, proposes a theatrical experiment. The show has an unprecedented schedule, that encourages social distance, without losing sight of communication, the habit and the theatrical power.

The search for alternative paths that harbor language and that monetize the sector's creative and productive chains is essential for economic survival in Covid's times 19. The segment was the first to be paralyzed and will certainly be the last to resume its activities. 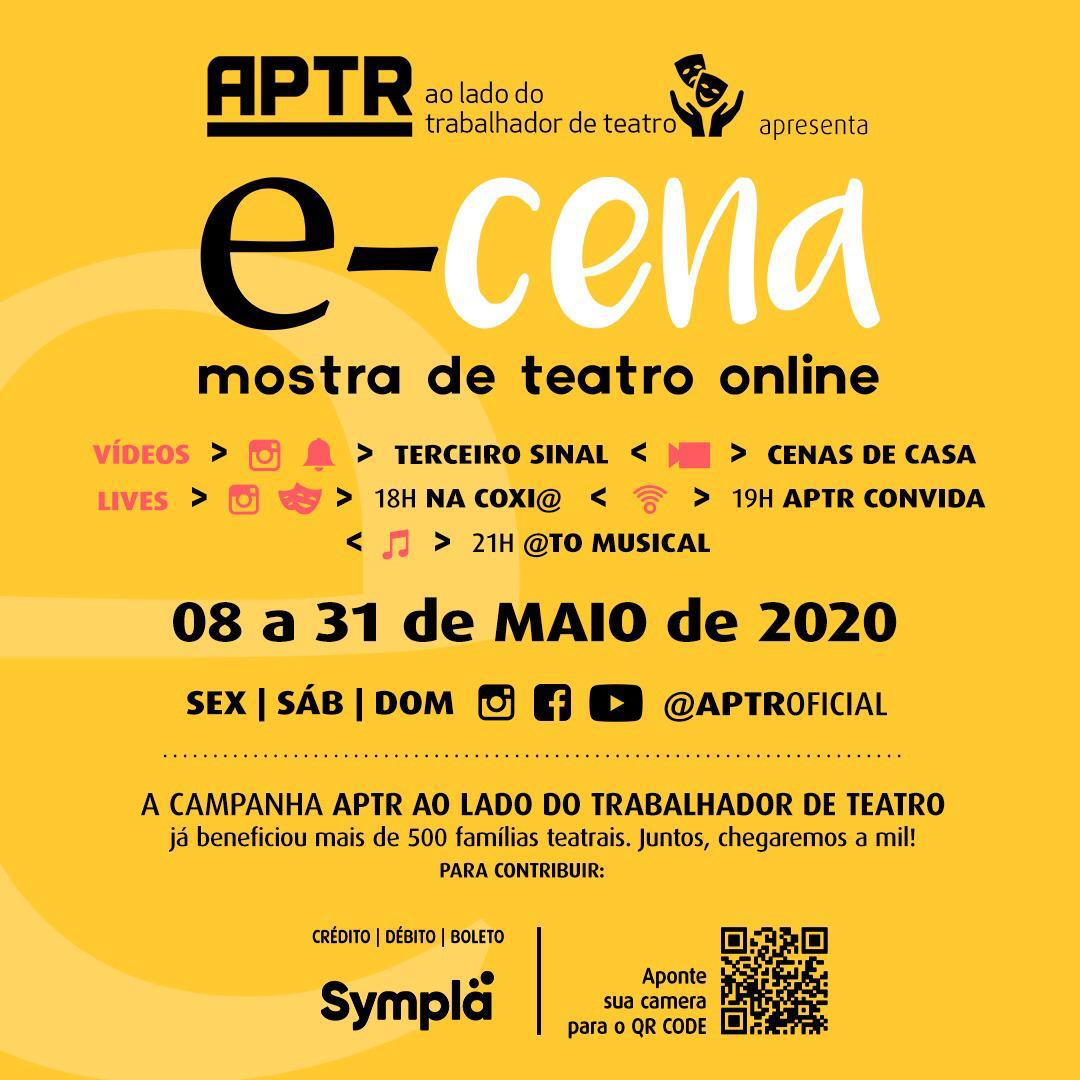 E-Cena's presentation schedule is divided between the following contents:

Texts and provocations from professionals in the theater production chain – actors, creators, technicians, producers – about the sensations (cold in the belly, pounding heart, fome…) after the third signal.

The opening will take place with a text by Eduardo Bakr performed by Bel Kutner, Camila Amado (audio), Carol Aguiar, Flavia Santana, Françoise Forton, Gilberto Gawronski, Leticia Soares, Luiz Guilherme, Marcelo Alonso Neves (music), Miriam Freeland, Mouhamed Harfouch, Sylvia Massari, Tadeu Aguiar, Vera Fischer, among others. The opening text reflects on the moment of pause that we are living with social isolation and the eternal capacity and the eternal capacity for renewal of the theater.

In this weekend, First Act of “Cenas de Casa” will be launched. On the other side of the portal, a new world unfolds before our eyes: are powerful artists who, inside their homes, free themselves from confinement and multiply in classic texts, contemporaries, dramatic and irreverent.

They give new meanings to your intimate and poetic space; transform kitchens, bedrooms, bathrooms and corridors in everyday art. The world gets much bigger when we open the portal. That's why APTR invited friends and art partners to choose poems, songs and texts; broaden looks and eavesdropping; immerse themselves in the space of the virtual theater.

Scenes from Home is a creation of Monique Gardenberg, Karen Acioly and Marta Paret that unites theater and audiovisual. They are sequences of theatrical scenes performed by actors while performing daily activities at home. The viewer strolls through different rooms of a house and finds an online theatrical show that unites different texts, directions, conceptions and interpretations. The varied repertoire includes texts by great authors of all times.

Music: Let It Be

Chat with Eduardo Barata. A theatrical encounter between 3 or 4 professionals of relevance to the Brazilian scene. The broadcast will be live, from sixth to sunday, at 19h, via Instagram, Facebook e Youtube, by official APTR profiles.

They are confirmed for this weekend:

Live no Instagram, from to 1 hour, of guest artists. The broadcast will take place from Friday to Sunday, at 9:00 pm, by @aptroficial. Artists will present songs of their choice, talking about musical shows and interacting with the audience.

Are confirmed for this weekend:

Live no Instagram, from to 1 hour, of guest artists, transmitted, from sixth to sunday, at 18h, by @aptroficial. Cross-cutting themes on culture and daily life in the pandemic will be addressed.

They are confirmed for this weekend:

One of the objectives of the show is to expand the collection of donations for the campaign “APTR NEXT TO THE THEATER WORKER”, that has already benefited 500 professionals and their families, with a VR card, in the amount of R $ 500.00. The goal is to achieve 1.000 contemplated. In all actions, there will be a QR code from Sympla or the link below, by which the public can make its contribution:

Previous: Cris Sybilla - “Dance, poetic language of the body”, by Juliana Vannucchi
Next: The return of Drive-in: a fun and “meetings” amid Pandemic