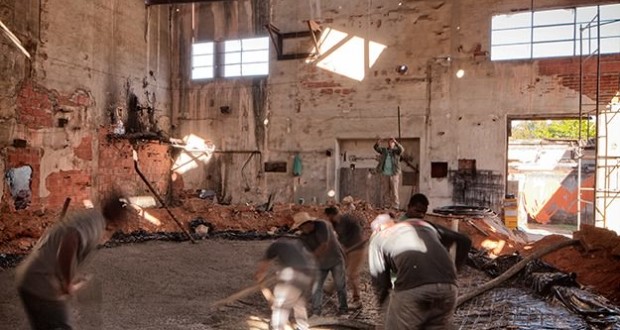 From September 1, the artist Eduardo Frota presents the Marcos Amaro Art Factory (FAME), em It, des / BUILD ON RUINS, unprecedented project, designed especially for one of the sheds of the former Factory St. Peter, dedicated to the textile sector. Built in dialogue with the local architecture and using debris, the work site specific It suggests a reflection on the incongruities of the industrial system. The exhibition goes on display until December 1.

Riding in the Shed of the Vulture, where once worked the dyeing factory, the installation takes the form of a Moorhen indigo mirror, artificially fed by a liquid pouring the old chimney of the plant's boiler. The conductor tube before expelling the steam used as energy source for the entire complex, now has its cycle and is inverted resignified.

“Opens here a fundamental question about the use of water: the contradictory relation between its offer in abundance for the manufacturing industry of private capital and its scarcity and loss when directed to the population. Public policies should ensure that the universal right to water and its reuse, return to nature with no waste as environmental pollution, They are excluded in order to meet the interests of a few”, says the artist.

In space, continuous scene enters the visitor in an atmosphere where overlap two different times. The net, intrinsic to day operation of textile production in an industrial shed dyeing, returns to its source, bringing the ink that colored this process.

The Eduardo Fleet exhibition is the second project awarded by the Occupation Notice Factory St. Peter, promoted by Marcos Amaro Foundation in order to promote contemporary artistic production. The first of these, conducted between April and July this year, It was spearheaded by the artist Edith Derdyk.

Eduardo Fleet is a cearense artist and was nominated for PIPA prize 2010. It has held individual and collective exhibitions in Brazil (Oscar Niemeyer Museum, XXC International Biennial of São Paulo and other institutions) and abroad (Contemporary Brazilian Art, Lebanon and S. Paulo - Centro per l'Arte Contemporary, Italy), since 1977. Currently, also serves as an art teacher and educator.

He graduated in Arts in Education (ciae) the Little School of Art in Brazil (EAB – RJ), He has a degree in Arts Education for Integrated Schools Bennett (RJ) and attended the School of Visual Arts (EAV – RJ). In the 90, It was co-founder and coordinator of the core art of Porch House Art (EC) and 2001, deputy curator of Rumos Visual Itaú II Program (EC, PI, MA TO E).

The Foundation Marcos Amaro is a private cultural non-profit organization, which aims to encourage contemporary artistic creation, critically investigate and document the art of paths, and, yet, allow the public access to the collection collector and artist Marcos Amaro. Its headquarters is located in Marcos Amaro Art Factory (FAME), em It, city 100 kilometers from the capital.

Among the initiatives that promotes, They are a careful exhibition program, an annual announcement of support for artists, a prominent annual awards for best creative output, the continued encouragement of academic research, in addition to promoting discussions and special projects in public spaces.

Previous: Exhibition "Color Emotion" in ABRASCI by Edmundo Cavalcanti
Next: BR Brazil Show will be the first dedicated digital platform for Samba

Meetings of the Image - PhotoBook Award 2020, by Rosângela Vig