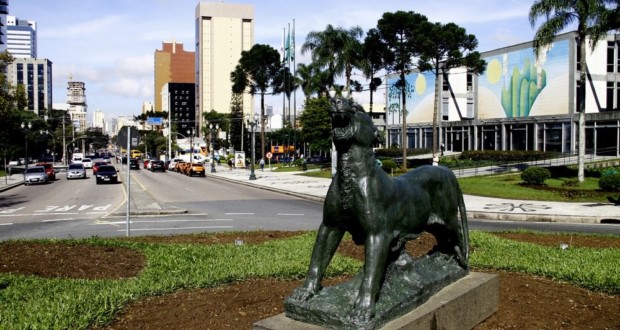 Sculpture Moonlight do Sertão, from John Turin, back to Civic Center circle

The work of the hinterland Moonlight, the artist John Turin, will be returned to their place of origin, at the roundabout, Avenida Cândido de Abreu, next to the headquarters of the Prefecture. Replacement of sculpture, it underwent a restoration, will be made on Tuesday (2), at 8:0 pm, by a team of Studio John Turin, with monitoring the coordination of preservation and conservation of collections of the Cultural Foundation of Curitiba.

The bronze sculpture of the Jaguar, representative of one of the phases in which the artist devoted himself to play cats and felines, had already been restored and reseated by the Studio two years ago, but it was damaged and had to be removed again for repairs.

Just as in the previous restoration, the works were in charge of the workshop, who owns the rights over the collection of sculptor. The rights were purchased by collector curitibano Samuel Ferrari Lake, in partnership with the City Hall, started in 2013 a large reclamation project of the artist's sculptures are in public spaces.

About the work -The Jaguar named Moonlight do Sertão is a bronze sculpture, in natural size, held in 1947. Part of the stage where Turin was inspired by cats and felines promenade. Since the animals slept most of the day, the artist, in advanced age, began to go to the Park at night: buy meat at the butcher's Garmatter and negotiated to get better lighting. "It was hell, not counting the rain, the drizzle, the mud, the cold, because we're not a kid anymore and can't handle well ", stated at the time. But the effort paid off: the ounce "Moonlight do Sertão" earned many awards and honors the Turin.

Previous: Curating House introduces new products and prints of the artist Aline Pascholati
Next: Exhibition "Allegory of the arts – Leon Pallière" in the MNBA