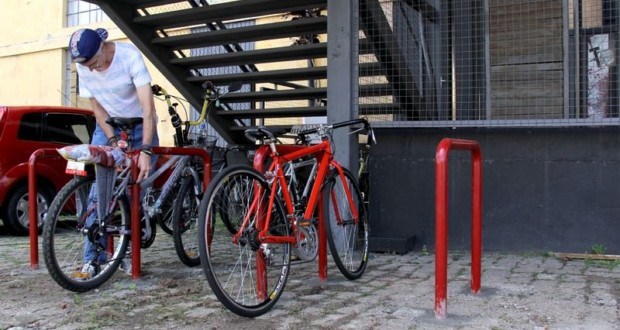 Vacancies cultural units are part of the project of encouraging bicycle use, that includes the expansion and improvement of the network of cycle paths, creation of ciclorrotas, calm routes with deployment priority space for bike along the channels, new occupation plan for bike racks and public adoption of a public bicycle rental system.

The paraciclos material was provided by the Secretariat of transit – Setran, who coordinates the deployment of bicycle racks in urban spaces. According to the Coordinator of the urban mobility Setran, Gustavo Garrett, cultural units are among those who receive higher demand of cyclists, so were listed to receive the paraciclos. "For us this initiative of the Cultural Foundation, who was responsible for the installation, is very interesting because it breaks down the costs and enhances the deployment of such equipment in more locations, in less time ", says the Coordinator.

One of the first units of the paraciclos Cultural Foundation was Rebouças mill, FCC Headquarters, where multiple users and staff are using daily to bicycle as means of transport. "Now, the location to store the bikes became well defined, avoiding that is occupied by motorcycles and cars. It was very good. Without doubt, is an incentive for more people use the bike ", says John Pedro Gaspar, the FCC that riding every day about to 8 kilometers to get to your workplace. Gaspar lives in Vila Isabel and account that prefers the bike in the car. "Use the bike path and via Av calm. Sete de Setembro. It is quiet ", ensures.