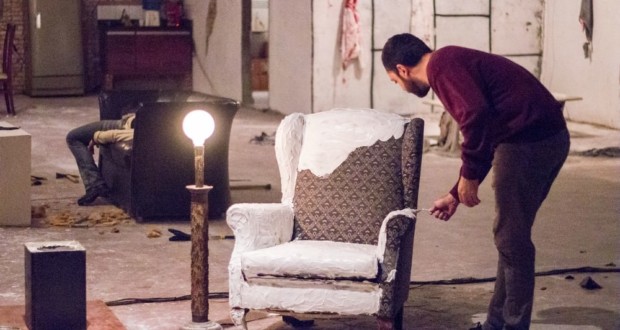 Review the Ephemerality of the choreographic act as action able to transform the real, from an installation with material elements characteristic and objects, that will be irreversibly traumatized by artists, is the starting point of ABOUT THE FAILURE OF THE FORMS, choreographic installation, It discusses and shock the boundaries between contemporary dance, performance and sculpture. The show-installation of contemporary dance, new Mapping Collective, closes season with presentations to 2 July, Mungunzá shed with free tickets. On Saturday, 1st of July, the artist Jorge Soledar, who created the installation next to the components of the Cartographic participates in Collective action.

In ABOUT THE FAILURE OF THE FORMS -included in the 20th Edition of the Municipal program of promotion of dance for the city of São Paulo – the collective Map, formed in 2011 by Carolina artists Nóbrega, Fabiane Castro and Monica Galvão, continues to research the Group, supported in the clash between body and environment.

The new job, created in partnership with the visual artist Jorge Soledar, occupies the entire space of a shed 230 meters2 in the neighborhood of Bom Retiro, with mobile home, plaster and construction tools, creating an environment that is both a House and a building site. Every day, the three artists of the group will perform different action scripts, that will gradually erode the initial installation, in a continuing narrative of destruction, that will last a month (from 10 from June to 2 July, Saturdays and Sundays from 19 to 22 hours with the opening of the shed at 18 hours). You can get or get out of that event at any moment in this time interval.

ABOUT THE FAILURE OF THE FORMS is an offshoot of an earlier work of Map, the series failures, composed of six different performances, each created from the irreversible clash between the bodies of the performers and some specific materiality, who defined all the action choreography, namely: ice, styrofoam, brick, and metal lamps. They were, therefore, of gross and industrial material elements characteristic, no marks of historicity, they were destroyed during the performance, but can be replaced with identical parts. In the current work, the Cartographic Collective will forge an industrial element (plaster) the mobile home used, impossible to be replaced, being your destruction a more obvious experience of death.

The members of the collective narrate how the process of ABOUT THE FAILURE OF THE FORMS It was crossed by the current national and international policy disintegrate, who destroyed the possibility of faith in a more egalitarian perspective of life in society through the deepening of social democracy. According to them, this process, per hour, not generate a break with the modes of existence that had been woven, but an indigestible and painful continuity, everyday existence being decadent and derruída, the background of the installation, that presents individuals in symbiosis and destroying your own everyday experience, exposed now as empty and arbitrary. 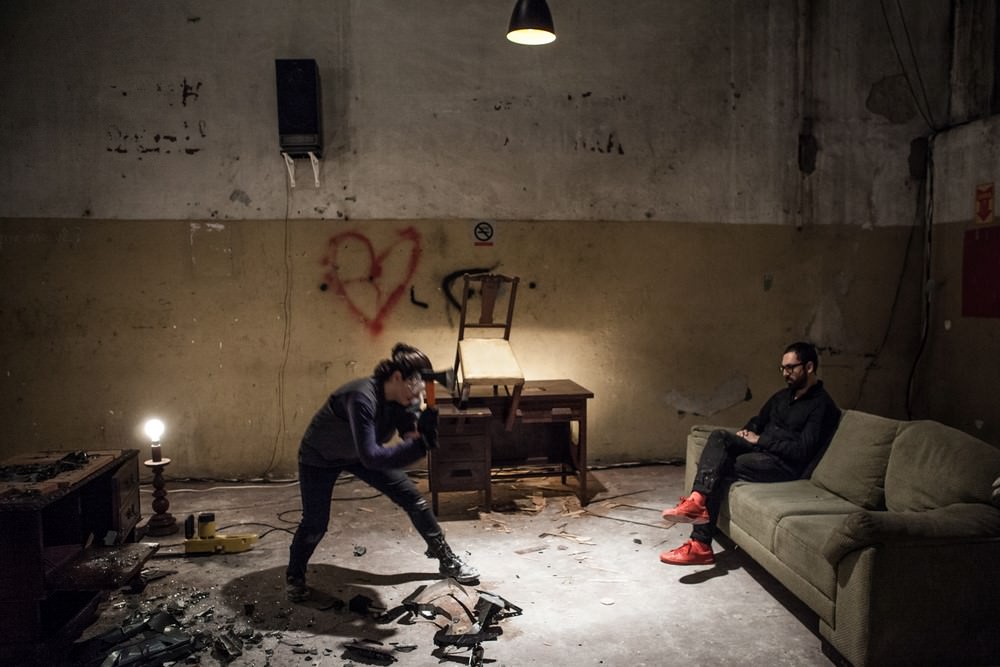 The collective Map found, between his research and the visual artist Jorge Soledar, the common interest in non-hierarchical relationship between bodies and material elements characteristic and the sculptural and performative power that results of this meeting. Thus, the process of with the artist was a very powerful further merges between the choreography and the sculpture. After all, Jorge Soledar includes in their sculptural installations, the presence of human bodies as equal to the material elements characteristic elements and objects (How to plaster, wood and mannequins) but that also causes some kind of disturbance to the stability of matter, that is destroyed from any human action.

Also integrate the choreographic research installation soundtrack, lighting and costumes, designed by a group of artists invited to participate in the process of creating the work. The proposal was that these elements were designed from a performance logic and not in a spectacular logic or fictional.

The musician Gustavo Lemos, working with musical immersive environments, you will develop the sound of the work by the choreographic action, from the noise produced by various contact MICS that are plastered next to furniture installation. The lighting, signed by Vinicius Andrade, play with the dialectic of own work (the House and the construction site), with rooms illuminated by domestic fixtures, overlaid by a facility with industrial lights. Gabriela Already Cherubini, responsible for the creation of costumes, proposed the clothing also as a material to be destroyed by the action of the performers, through used clothing purchased at thrift stores, in which the corrosion process has already been started by the use and wear for minor cuts and desfiamentos made by costume designer. 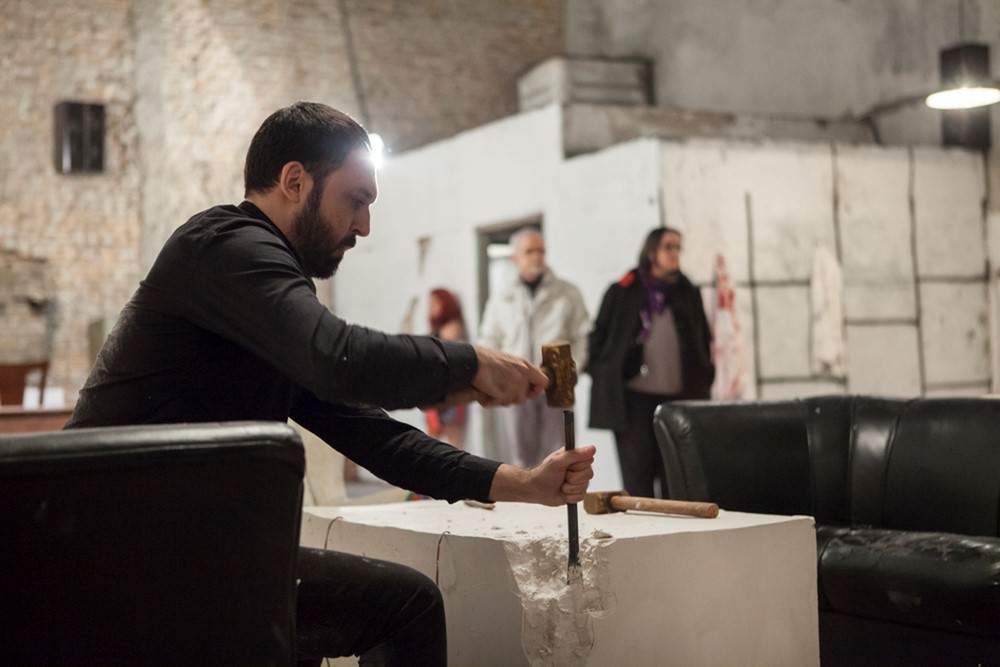 ABOUT THE FAILURE OF THE FORMS is the end result of a project awarded by the 20to Edition of the dance for the city of São Paulo, as well as the 21st Edition, were released and initiated even in 2016. According to the Cartographic Collective current management just destroy this edict, being these two previous editions, the latest that Iran still witness a dance creation mode that had been possible in the city of Sao Paulo in the last 20 years, through the struggle of many dance artists. They narrate the Promotion was the only existing public policy in the city open to research and experimentation, that allowed the groups exceed very language vision of dance as the shows production. Keep explaining that, to cancel the process of the public notice on course for the 22nd Edition and then launch a new announcement, without any public consultation, the Municipal Secretary of Culture misread the Promotion, through an illegal and disrespectful attitude, that hurts the principles of Law to encourage Dance through a super conservative thinking which sees the language just as production and circulation of spectacles. The Cartographic artists insist that the justification of the Secretariat that this attitude would have advantage of a need for greater democratization of the edict isn't true, because it decreases the possibilities of dance while political action of objective and subjective transformation of the city.

They tell how the process of ABOUT THE FAILURE OF THE FORMS becomes impossible from now on, unless the Department revoke your decision. After all, In addition to his own choreographic installation which will be presented, the project involved numerous other actions, they, of democratization, as the residence of the collective Threshold, a contemporary dance group of young dancers of Campo Limpo, the outskirts of the South zone, formed from the guidelines of one of the members of the Vocational Program offered through Cartographic. For the members of the threshold to participate of the residence, duration of three months, they received a research scholarship, without which it would be impossible that they could move to the Center to work. During the period, the Cartographic and other Collective artists who integrate the technical project, shared practices, reflections and modes to exist, seeking the construction of a stage-pedagogic process of contagion, to destroy the notion of authorship and allows the young Group won autonomy to pursue the research from their own interests. The new edict released that would be completely impractical and the Cartographic argues that the loss of these artistic modes of action in the city of São Paulo is immeasurable and unfortunate.

Previous: Exhibition assembles works of 120 illustrators curitibanos
Next: Collective exhibition “3 the A” ends next Saturday (1)