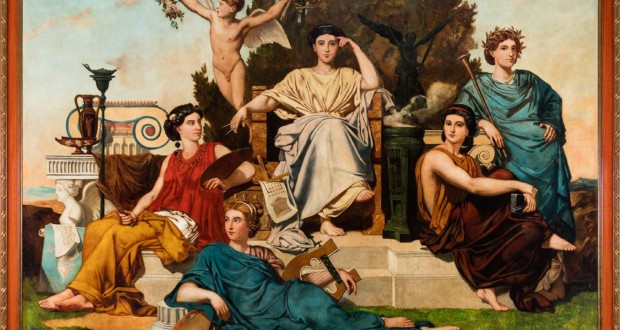 Exhibition "Allegory of the arts – Leon Pallière" in the MNBA

Commissioned by the then Director of the Imperial Academy of fine arts (AIBA), Manuel de Araújo Porto-Alegre, the painting measures 297 x 410 cm and was produced in 1855 to decorate the ceiling of the library of the Academy, built in 1826 and inexplicably demolished between 1937 and 1938.

The AIBA was the first official art education institution in Brazil and its portico is the Botanical Garden of Rio de Janeiro since the ' 1940.

The nobility and simplicity of shapes and colors, parameters of the neoclassical art, give the tonality of the legendary maruflada painting (colada) the ceiling of the library, representing the muses of architecture, the painting, Sculpture, Poetry and Music.

The exhibition Allegory of the arts – Leon Pallière includes documents, sculptures and more 2 pictures and this event, According to one of the Trustees, the museologist Pedro Xexéo, "allows new possibilities of reading not just of an institution and a collection that demonstrate the inexhaustible presence of 19th century brazilian art today, as well as the arrival and the importance of the Missão Artística Francesa in Brazil ". The Missão Artística Francesa, Remember, came to Brazil in 1816.

Jean-Leon Pallière Grandjean Ferreira (Rio de Janeiro, 1823/Paris 1887) He studied in the Studio of François-Edouard Picot, in the French capital, and the 25 years returned to Brazil, having joined in the Imperial Academy of fine arts. The artist won an award for trip abroad and could thus enhance his art in Italy.

Grandson of the well-known architect Grandjean de Montigny, Leon Pallière made several trips to South America, including a passage for Buenos Aires (Argentina), where he stayed until 1866. His artistic career met many transformations throughout the career, with registration of landscapes, cultural and social aspects of popular traditions in the techniques of watercolor and printmaking.

The restoration of the "Allegory of the arts" featured PACCH resources, involving a partnership between the MNBA, IBRAM, IPHAN and the Consulate General of France in Rio.