The exhibition Bahia, contemporary Bahia, at Roberto Alban Art Gallery, follows this desire in a muchmore specific way: thinking the contemporary production, from artists that work since Bahia. We don´t intend to assert specific features, manners or accents. So that now, activate, the presence of a multicultural eye that also crosses this production, making the history of each selected artist connect in a greater or lesser level to the historical influxes: Almandrade had contact with Helio Oiticica and he is considered a pioneer of contemporary art in Bahia.

Willyams Martins started to produce concurrently with events such as exhibition that launched painters of the Generation 80, Lara Viana studied in England in academic centers that formed Damien Hirst, Josilton Tonm had contact with modernists from Bahia and with the long years of the important Salão da Bahia (Bahia Show). So that now, history is renewed and presents Március Kaoru´s productions, thought from family memories, the production of a Japanese descendant in Salvador, Vinícius S.A. that bravely expands the appropriation of domestic appliances for the big installations and Fábio Magalhães, whose painting activates and dissimulates possible adherences to images from Bahia. At the same time, we have the surprise of being able to count on a photographic interest, at the same time, installations and performance oriented by Rosa Bunchaft that makes photography an immersive experience. 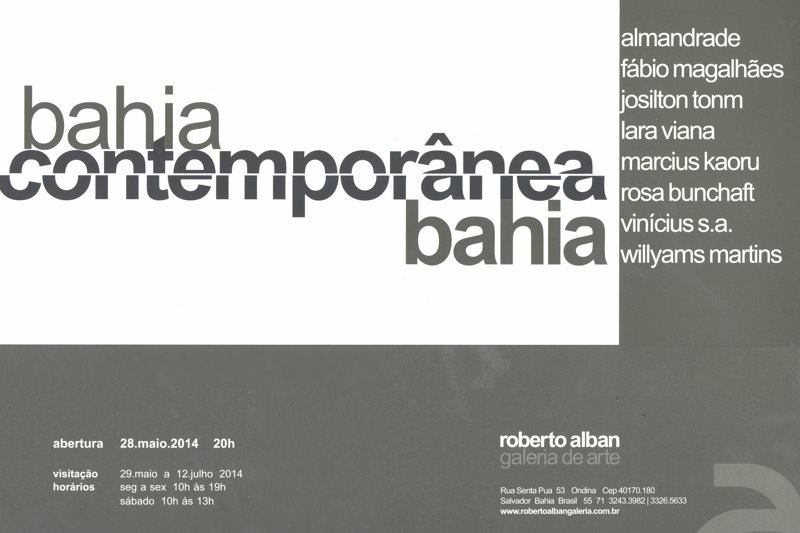 Spotlight on ALMANDRADE that presents works of the decade 1970, which are the first experiments in contemporary art in Bahia. 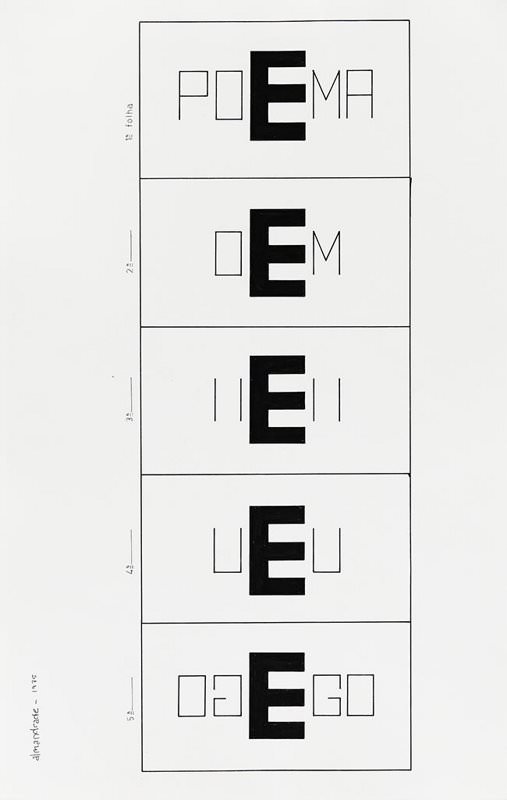 The much acclaimed dematerialization of art, from the years 1960, reestablished how artists dealt with the permanence and the origin of the materials. Thus, the possibility of use of shapes and mundane objects adapted itself to modes of circulation of the artistic experiences, the so-called art postcard, for example. Almandrade is an artist that activates these historical interests, develops immensely the materiality of common origin, banal, to think about messages, words that become visual poems. Belongs to the generation that used art as a slogan, Almandrade remained attentive to the semantic fields, in addition to visual, producing situations that are, mainly, language games.

The Poem / Ego by Almandrade is almost a post-modern poeticity theorem, but, performed in a neo-baroque concretion… 5 parts, 5 letters, 5 times And… The poem that is seen is Metapoem. The Poet sees that his poem is Metapoet. The Ego is seeing is egocentric…(Jairo Nogueira Luna)

Previous: Course of Concept Art by Rod Pereira
Next: Gallery PontoArt and SP Estampa present the exhibition "Engravings and Techniques" by Edmundo Cavalcanti