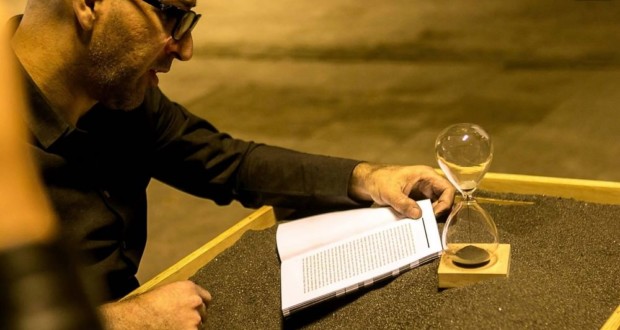 Action integrates the Contamination Display, that puts in three important works for the brazilian literature: Zero (1974), of Ignacio de Loyola Brandão; The concert of João Gilberto in Rio de Janeiro (1982), Sérgio Sant Anna ´, and there were too many Horses (2001), of LDominic Ruffato and create dialogues with different artistic languages

20 national and international authors books with romance, poetry and art are the starting point of THE READER, performance of the artist Alexandre D'angeli, that is part of the exhibition Contamination, the Sesc Ipiranga, and happens day 8 April, Saturday, from 18 to 21 hours, in the Hall of the unit. The action is presented in the days 27 May and 24 of June.

THE READER It's a performance that presents the artistic research of Alexander D'angeli about the presence of the body in oral literature – the artist designed a table instead of table top has a box that holds 100 pounds of sand where are buried the books. The programme of action proposes that the titles one by one from being unearthed by the performer and read excerpts aloud for two minutes, time that is marked by a sand timer (Hourglass).

Among the books that are part of the work highlighted Zero, of Ignacio de Loyola Brandão; The concert of João Gilberto in Rio de Janeiro, Sérgio Sant anna ´; There Were Too Many Horses, by Luiz Ruffato; Ho-ba-la-la, by Marc Fischer; Two in one, Alice Ruiz; Slave Tales, Marcelino Freire; The Raven, Edgar Allan Poe and The doors of perception, by Aldous Huxley, among others.

For D'angeli performance deepens your research issues about possible interactions between body and space. If the action Waste, 300 pounds of red sand were used to cover the body artist static for a period of 3 hours, now the same sand, but black, copper objects at home that are waiting to be revealed "books", What happens at the moment that are activated by reading.

According to the artist, the action also plays focus on the origin of the word. "The book is just an object and becomes something only when discovered, opened and read. Browse the books in the middle of 100 pounds of sand, Open a page at random and read for two minutes is a search for small treasures, a real work of archaeology ", He explains. 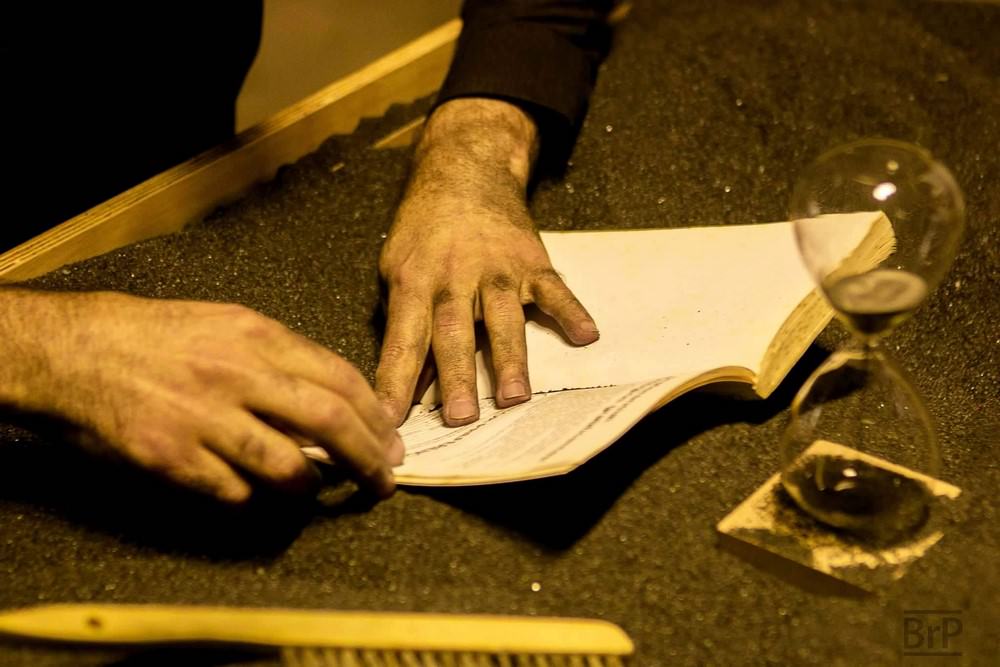 Performer, actor and puppeteer with a degree in performing arts. Specialized in Dramatic corporeal MIME and Theatrical Stunt by Ecole International de Mime Corporel Dramatique Gestuel of Paris, under the guidance of master Ivan Bacciocchi. Interested especially for the languages more directly related to the body, and that operate at the intersection of performance and the theatre. He was founder and artistic director of the soul 2. Participated in the occupation project “It's Right There” the Sesc Ipiranga with Listening to the Sheep Sleeping, performance with texts of the author and cartoonist Caco Gallardo, He also participated in the Festival Sesc Rio de Janeiro's winter and Virada Cultural in Belo Horizonte at Sesc Palladium. Integrated display Communal Land – Marina Abramovic + MAI as a facilitator of the Abramovic method. In the same year 436, long-term performance and installation, proposing to visitors of the Memorial of the resistance of São Paulo Assembly of 436 paper faces in memory to the dead and missing politicians. In 2010 was responsible for the artistic interventions carried out in the Tietê Bus Terminal during the Virada Cultural, emphasis on Valuables and Présence Decroux. Participated with the performance Valuables parallel opening 29th São Paulo biennial promoted by Sesc Campinas. Creator and performer in Molloy – The end is the beginning and yet continue, Show sign Theatre solo inspired by the novel by Samuel Beckett, who participated in the show "Samuel Beckett – 100 years "organised by SESC Santana and joined the VII Shows Cariri of arts through the Revolving Stage of SESC Ceará. In 2016 He joined the V biennial of Performance of Bogotá, the Festival La Plaformance-networked Resistance, the second edition of the Mezzanine Gallery MOVES with the performance The Reader, and conducted the performance An ergonomic study of the Ephemeral, in Permeable Presence project, the square of the arts, in São Paulo. He also participated in the SP-art and MP3 – Mostra Internacional de Performance de Belo Horizonte with the performance Waste, work in 2015 was held at the bad habits of Artistic Intervention Space, in the city of Porto, in Portugal, and also in the project Performance in Meeting the Sesc Campinas. www.alexandredangeli.com 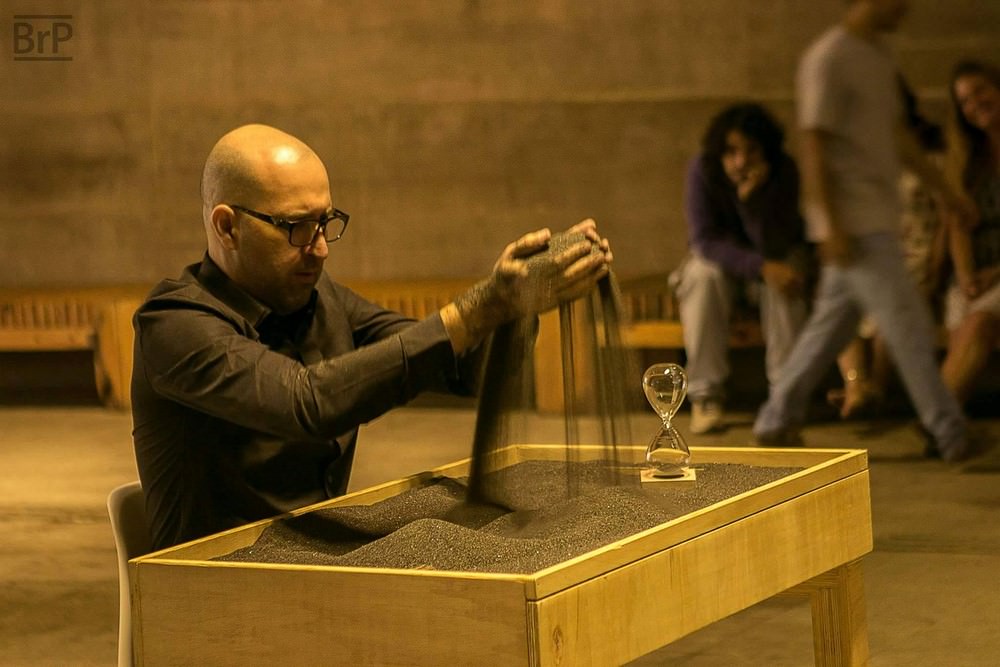 THE READER -Day 8 April, Saturday, from 18 to 21 hours, in the Hall of Sesc Ipiranga. Performance of Alexander D'angeli. Free to all audiences. Capacity – 100 people. Duration – 180 minutes. FREE.