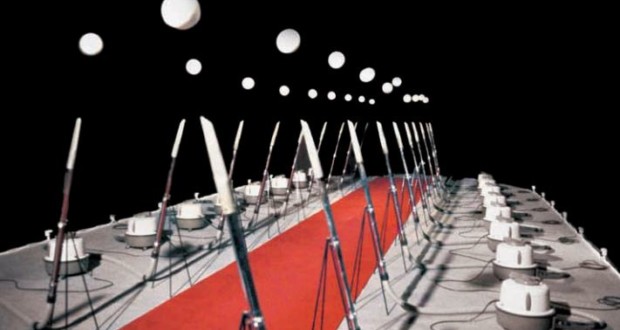 Feel everything in every way,
Live all on all sides,
Be the same in every way possible, at the same time,
Perform itself all mankind, of all times,
A fuzzy moment, profuse, complete and far away.
(FIELDS, 2011, p.20)

The passage of time, art moves forward with great strides, forward if, covers and close relations with who insists on creating. For her, talk about the sensations and broaden the perceptual fields, causing more than a single glance. Is by the feeling that the artist makes you think and causes. And there's no limit to the challenges that art promotes.

For the architect Guto Lacaz, pursue in this field involves the various emotions; with respect to the various languages that pass through the perceptual field and to stimulate, that incites the look, the audition, the tact. By their works, It is possible that the viewer wander; you feel like you're in a surreal world, that became real. So is the installation of Guto Lacaz, from 1986. So current about engaging; as provocative as fascinating.

The work, purchased by the Gallery in 2016, has already been on display in Paris, in 1988 and is composed of vacuum cleaners, aligned in two rows. The red carpet, the center of the Hall, Invites the Viewer to walk, as the main character of the work, to the sound of classical music. The final effect is completed, with the spheres which shake, to present and to dance to the breath of the vacuum cleaner, on the sides of the Hall, the taste of music. The main character, fit feel in the midst of a crowd, who watches intently, a presentation of classical music.

This experience can be shared by the public, in the Pinacoteca Station, where will be the work of Guto Lacaz until February 2017. The Pinacoteca is located on Lake General Osório, 66, Light, in São Paulo.

… Lacaz, 39 years, take care personally of your installation, that causes laughter in French. Front of the observation that there was, literally, deleted the work of Raoul Dufy – the "fairy electricity", considered the greatest painting in the world – Lacaz said he "didn't want to make any connection with the screen", He was there by accident and I didn't even know that the place was of Dufy. The Panel covers the wall of the room where is Lacaz. So that now, as the Panel was cut one can see, in the shadows, 20 vacuum cleaners…

The Brazil in France: An interesting Ballet balls, assembled by the artist paulista Guto Lacaz, being one of the largest "su" in the exhibition Modernism, at the Museum of modern art, Paris.

The exhibition aims to show the quality of national artists. And national creativity excelled through the Ballet balls, where, using some 30 vacuum cleaners, blowing at different speeds, gives a nice visual on the rises and falls of colored balls.