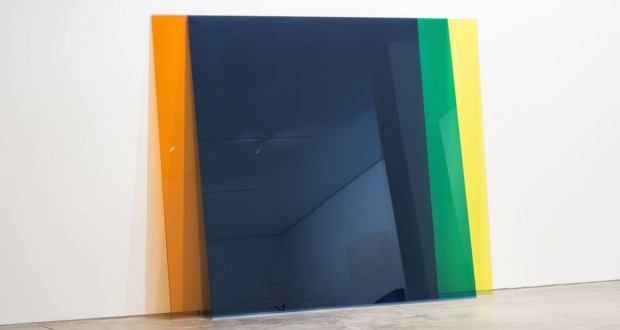 Galeria Marcelo Guarnieri is pleased to present, between 11 th November of 2020 and 15 January 2021, “On the sidelines”, first solo exhibition by artist Carlos Fajardo at the gallery's headquarters in São Paulo. The exhibition brings together works produced between 2017 and 2020, most of them made in dialogue with the gallery space, specially designed for exhibition. In “On the sidelines”, Fajardo continues the research he has been developing for more than five decades on the spatial relationships between the body, the object and the architecture, this occasion through work with reflective materials, transparent and bright.

From the different scales of the three rooms in the gallery, photographs and glass sculptures, mirror and fabric articulate in space, activating the viewer's sensory perceptions that can be both the observer - through the cracks - and the observed - through the mirror. The sense of vision is summoned in the exhibition not only by the works, that examine aspects related to the formation and multiplication of the image, be it photographic or virtual, but also as an enunciation in its title formed by a word that alludes to the deviation of the gaze. Potential deviations accompany the viewer on their way through the exhibition, surrounded by a material like glass, so fragile and yet so strong in its constitution, above all intimidating for its ability to reveal our own image.

The first room, the smallest of the three, receives a set of five works that are also the smallest in the exhibition. Leaning against the wall and arranged at eye level, are composed of photographs and colored and transparent laminated glass of 60 cm. The superposition of these surfaces at a certain angle of inclination produces the effect of multiplying colors and planes, allowing the viewer to access a third dimension. The obliquity that guides the assembly of these and other works formed by glass plates, appears in the second room without the support of the walls, at least physically. This is the case of the piece in which four rectangular plates are supported by a square structure at their upper ends, forming a kind of semi-open parallelepiped, independent in space. The wall, however, is still part of the subject. A rectangular cut crosses the one that serves as a partition between the second and third rooms, allowing the viewer a discreet and particular view of the works presented there, mainly the one that occupies the other end of the environment.

The game between transparencies and opacities is repeated here, since after covering the fourteen meters that separate the two ends of the room, the look meets the photograph of a room - the most intimate of domestic environments - illuminated by natural light from an open window, where you can just glimpse, behind a translucent curtain, an unmade bed. To curtain filter, that loses the tactile quality of its texture because it becomes an image, Fajardo adds two colored glass plates, which ends up making the clearest image there to be the reflection of the one who observes the work. 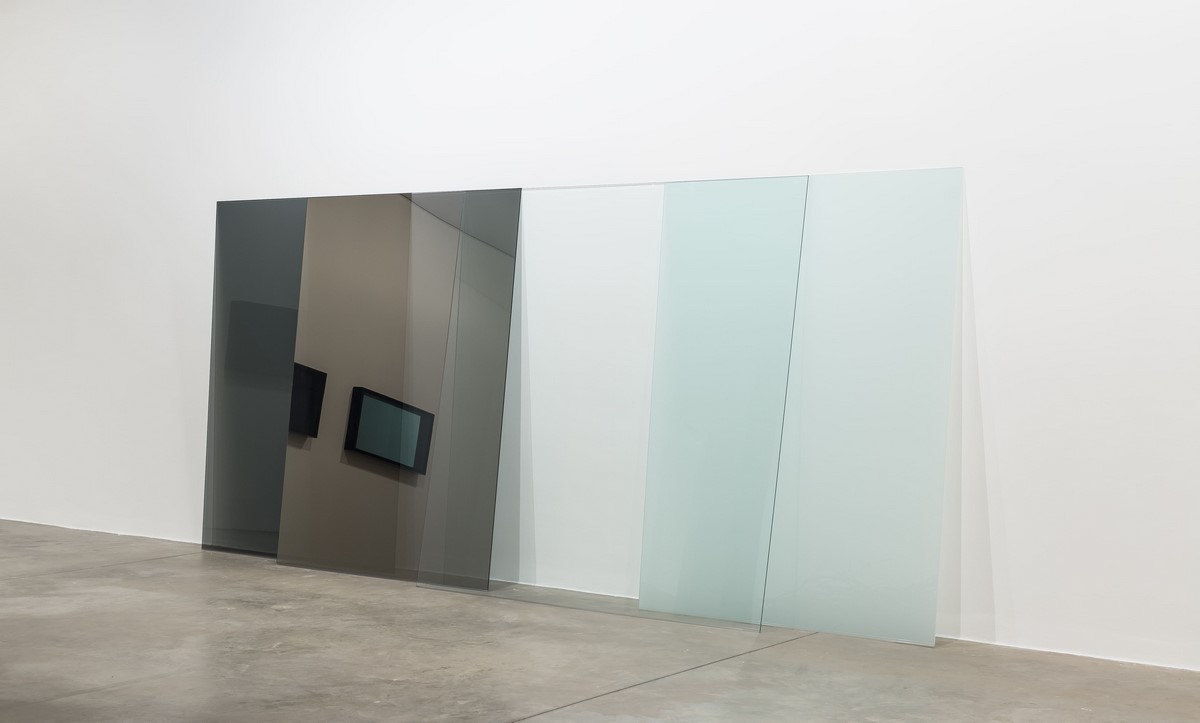 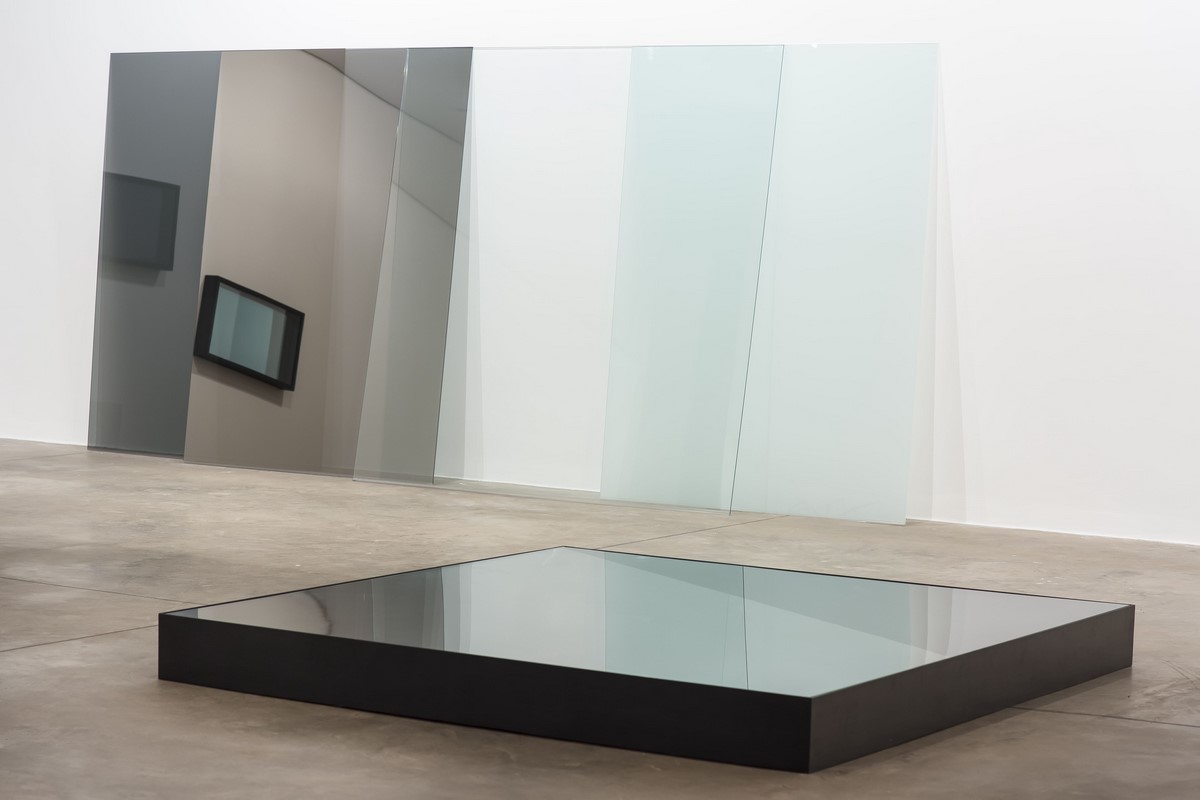 If through that gap in the wall the view was discreet and distant, the encounter with the pieces in this last room requires a more uninhibited viewer. Due to its large dimensions, the three moving parts that divide the space with three other fixed ones that lean against the wall, produce a more direct relationship with the body and invite frontal impact. Distributed throughout the room, amplify the space, multiplying reflexes in the countless combinations that can be generated from their possible movements.

Carlos Fajardo was born in 1941 in São Paulo, where he lives and works. His work has a significant presence in the Brazilian art scene as well as its more acting 40 years as a teacher. Throughout his career, He participated in many important exhibitions in Brazil and abroad, among which Young Contemporary Art, the Museum of Contemporary Art, University of São Paulo (MAC-USP), in 1967, organized by Walter Zanini. She participated in the 9th, 16st, 19st, 25Th and 29th editions of the Biennial, respectively 1967, 1981, 1987, 2001 and 2010. She represented Brazil at the Venice Biennale in 1978 and 1993. With Nelson Leirner, José Resende, Geraldo de Barros, Wesley Duke Lee and Frederico Nasser integrated, from 1966 to 1967, the Rex Group. The group questioned the institutions and the modus operandi of the art system through interventions, publications, lectures, projections or meetings. In 1970 founded with José Resende, Luiz Paulo Baravelli and Frederico Nasser at Escola Brasil, one “center of artistic experimentation dedicated to developing the creative capacity of the individual” that was important not only in the formation of many Brazilian artists, but also in the maturing of discussions about teaching and learning art in the country.

The exhibition can be visited by appointment, Monday to Friday from 10 am to 7 pm and on Saturdays from 10 am to 5 pm. To schedule, we ask that you contact us by email (info@galeriamarceloguarnieri.com.br), phone (11 3063 5410) or Whatsapp (11 96858-9005), providing full name and indicating the day and time of your visit. For your safety, it is worth reinforcing the mandatory use of a mask for the entire time you are in the gallery.