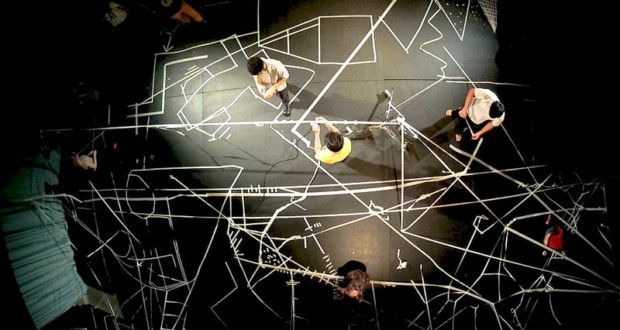 Art Director and scenic Designer, teaches the Interdisciplinary laboratory
Permeable Borders ", containing in this issue two modules
of course and a talk

On display until 10 July at Sesc Pinheiros, the exhibition Drawings of Scene #1 leads to the public 16 works by national and international artists that explore the possibilities of drawing scene as a central element in performances, bringing up the encounter between theatre and Visual Arts. Besides activations and performances, the show has a parallel programming with workshops, workshops, debates and lectures.

One of these activities is the Interdisciplinary Laboratory Permeable Borders, the art director and set designer Vera Hamburger, which aims to investigate the space of the scene as language, as well as the operating mechanisms of perception and human creationa.

Formed by a course-decoupled in two modules – and a lecture, the lab will begin in days 14 and 15 of June, with the module The experience the way. On the stage of Teatro Paulo Autran, Vera presents two sets of improvisation-based construction and in the collective work. The art director and set designer account that participants will have available materials of everyday use, lighting resources, sound and image capture and projection for the manufacture of a place, of a scene. “Intersperse trials this scenic trials construction, free of any conceptual or prerogative narrative”, explains. The module will also feature guest artists, the musician Dudu Tsuda will sound, While the photographer Ana Laura Leardini will lead the light.

Have we days 28, 29 and 30 of June, from Tuesday to Thursday, from 15 to 18 hours, Vera commands the second module, Art direction: A concept in professional practice. In this theoretical course will be discussed the main tools of the art director and all creative and technical process which involves the production in this area. Starting from leasing photographs, project drawings and photographs of buildings and scene, participants will do case studies of productions in which Vera Hamburger collaborated.

A Interdisciplinary Laboratory Permeable Borders ends in 1st of July, Friday, to 19 hours, with the lecture Permeable Borders: Of space on the Scene. In this conversation, Vera Hamburger discusses the method developed in the lab Permeable Borders, through the documentary video display and debate about fundamental concepts to experience looking for investigating the scene as language. The lecture will also be addressed issues such as the biography of a project, aesthetic research and artistic practice-ethical, the desire of the form as a means of learning, the design of the space and the perception and unforeseen construction and the primordial elements of space.

Acts as Art Director, scenic Designer, researcher and teacher of several cultural projects, in the areas of cinema, Theatre and exhibitions. Is architect and urbanist graduated by FAU-USP and master by the Department of performing arts from ECA-USP, with the dissertation The design of scenic area: experiential experience form.

As a set designer, acted in dramatic reading of Roda Viva and The Man and the horse, under the direction of José Celso Martinez Corrêa. In theatre and Opera, collaborated with the scenography shows how The Trilogy Antica, directed by Andrei Serban, with the national theatre of Romania, and Marco Nanini's monologue A night on the Moon.

In the exhibition area, He was responsible for the curatorship of Flávio Empire Occupation, at Itaú Cultural, and Castelo Rá-Tim-Bum, the Exhibition, In addition to performing the art direction of events such as More than a thousand Toys to the Brazilian child, at Sesc Pompeii. In the same area, collaborated in the scenographic design events such as Discovery showcase – Brasil 500 years – Archaeology and Indigenous Arts modules and the 21st International Biennial of São Paulo.