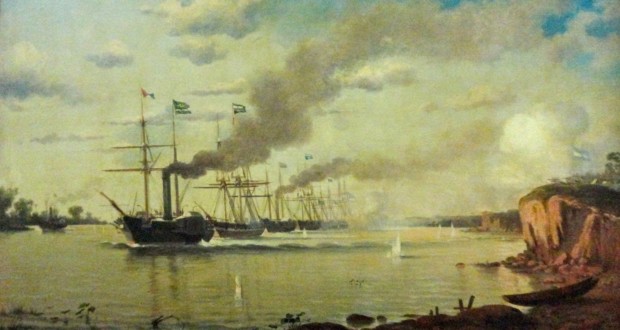 In the month of celebrations 150 years of the Naval Battle of Riachuelo (11 June 1865), the exhibition "De Martino in Brazil" recalls the work of one of the artists who represented in rich detail this conflict, which was witness. The opening is the day 16 of June, at 18h, no Museu Nacional de Belas Artes/Ibram/MinC.

Gathering about of 50 works, This view – presented by MNBA, by the Italian Cultural Institute and the Naval Museum -, It's a chance to get to know the work of one of the largest marine painters of his time. Some of them are being exposed for the first time.

The exhibition "De Martino in Brazil" includes a rare visual documentation of the war of the Triple Alliance which today form an extraordinary group of works of art, nominated by Unesco memory of the world, as part of the iconography of this clash. Among the paintings exposed, the highlight is "Naval Battle of Riachuelo", representing the most important victory of the Brazilian Navy.

Officer of the Navy of Italy, Eduardo De Martino (29/5/1838-22/5/1912) decided to take a turn in his career and opt for art. Migrated to South America, having been part of his life in Brazil, where married. His works have achieved international prestige, and influence on Brazilian art here at the time of the Imperial Academy of fine arts.

De Martino was an artist "with great power and possessor of a strong stroke and need", as one of the curators of the exhibition sets, Ivan Coelho de Sá, Dean of the Unirio. Today, his works are part of collections of respected Brazilian museums, as the MNBA, the Imperial Museum, Museu Naval, and the national historical Museum.

Still new, Eduardo de Martino expressed an inclination by the marine painting and also a keen interest by the record of historical events. Guided by these coordinates, visited the bloody scene of the war of the Triple Alliance against Paraguay (1865-1870), where returned with dozens of sketches and watercolors; that formed the basis for your screens.

How do you explain another curator of the exhibition Luciano Migiliaccio (FAU-USP), "The trajectory of Eduardo de Martino represented Brazil in the emergence of a modern artist who would acquire special significance at the time, due to its important political role. The supremacy of the naval armaments, increasingly linked to technological advances throughout the 19th century, acquired increasing significance in the competition among industrialized nations for global domination ". And contextualizing artistic production of the artist, Migliaccio adds: "The images created by the painter were perceived as important element to promote this aspect of the policy of modernisation and of politics outside the imperial government".