The Gallery features Marcelo Guarnieri, from 9 of the March 9 April 2020, at its headquarters in São Paulo, the first exhibition of the year, which brings together works of Eleonore Koch and Alfredo Volpi. Paints produced by Volpi in decades 1950 and 1970 divide the space of the two gallery rooms with paintings Eleonore Koch produced the same times. Other than these, one of the artist's sketchbooks drawn up between the decades of 1950 and 1980 and a rich set of etching studies, painting and drawing produced by it between the decades of 1970 and 1990 also shows part of the. The dialogue between Volpi and Eleonore Koch this exhibition echoes the important relationship of exchanges that had over the years - first as a teacher and a student and then as friends and professional partners - continuing the program initiated by the gallery in 2019, which features simultaneously works by artists who have held a dialogue during its trajectory or that can be read from conceptual and poetic approaches.

Still lifes, English gardens, home environments, marine and deserts. Throughout its production, Eleanor cook (Berlin – Germany, 1926) explored, through these issues, the management of colors and shapes that materials such as toughened, or cake, the oil, graphite and coal allow him. Color fields that meet the elements of his compositions show its structure through strokes or lines in parallel that make up, transparency of a make that is also reflected in the use of perspective - when the representation of some objects shows true to a vanishing point while the other ignores it completely, reducing them to geometric shapes planned. Koch allows its pitchers of flowers that float in space and the floor and the ceiling are distinguished only by the color. Its graphite studies show us that his concern is not centered only in color, but also in the arrangement of geometry - lines and surfaces - and balancing tones pencil enable it to operate through the route of the intensities.

Frequently mentioned as a pupil of Volpi, Eleonore Koch possessed a diverse training, teachers through artists like Yolanda Mohalyi, Samson Flexor, Bruno Giorgi, Elisabeth Nobiling and Arpad Szenes and also study their seasons and work outside Brazil, I between Paris 1949 and 1951 and London between 1968 and 1989. Most studies and paintings in the exhibition were produced just during the twenty years he lived in England, where he admitted having suffered great influence of British pop art, through the work of artists such as David Hockney. Are gathered in shows some sets of studies that allow the public to observe the development of a painting or a pastel from small variations of the elements that compose them - as the composition of a table and chair of the versions is presented only in schematic features and other longer adds another chair in front of a black background in coal, varying in three versions. Working with textures, present in the use of coal and toughened, if full use of cardboard and newsprint glue forming the vessels and color, Trees, petals and even the steps of the stairs of their gardens. Scraps of what look like phone directories of residents of London give depth and rhythm to the leafy treetops through the artwork of numbers and letters that make up.

Belonging to a previous generation of European immigrants who have taken up residence in Brazil, Alfredo Volpi (Lucca – Italy, 1896) is established in Sao Paulo even younger than Eleonore, with only one year old. The meeting with Koch would take away the 56 years, in 1953, in his studio in the neighborhood of Cambuci, by intermediation of the collector, Theon critical and shrink Spanudis. That same year, Volpi receive the award for Best National Painter conferred by the São Paulo Biennial, which had submitted their “Houses”, facades of representations of popular synthesized houses in geometric shapes. The decade of 1950 It marked a moment of maturation Volpi research on formal simplification of his compositions. It has distanced a certain figuration that had guided its production so far, He was engaged in building a vocabulary of elementary forms that appeared doors, windows, bows and flags that were part of their daily lives and that served him to explore the possibilities of technique and composition.

Volpi started his contact with painting 1911, working as a painter decorative walls, craft that holds up to at least the late 1940. His handmade expertise gave him support when he traded oil paint by tempering, going against the industrial imagery of the decade 1950. Volpi was with that Eleonore Koch learned the use of techniques and preparation of tempera and pigments made from natural lands, and it was also from there that often came to adopt them in his paintings, define your style. Debates vs figuration. abstraction, vs formalism. informalism were quite intense in those years that Koch went to Volpi in his studio, during the years 1953 and 1956. 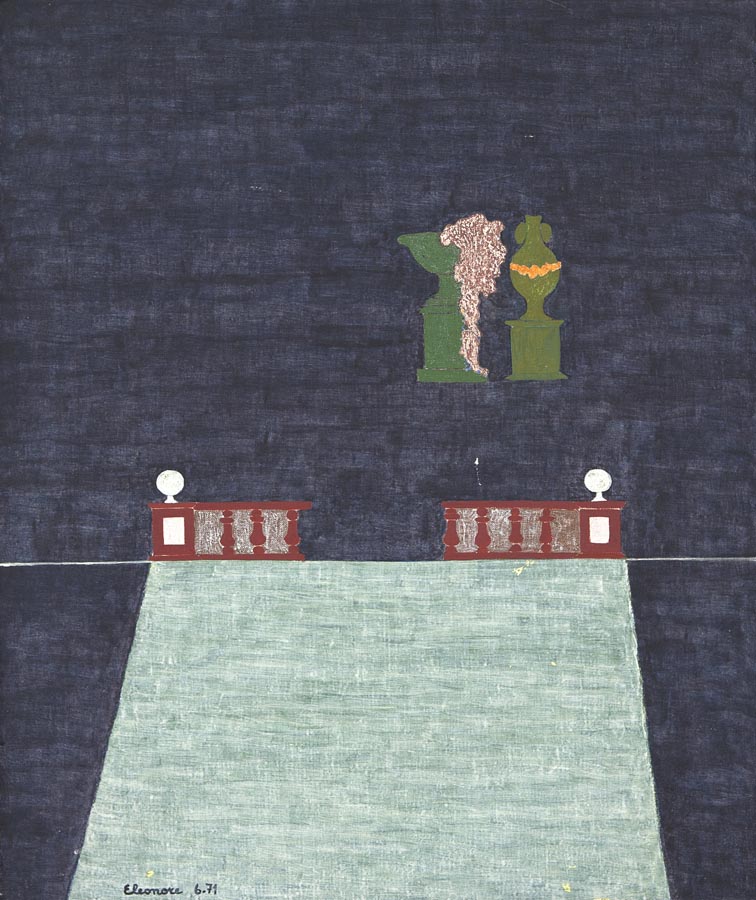 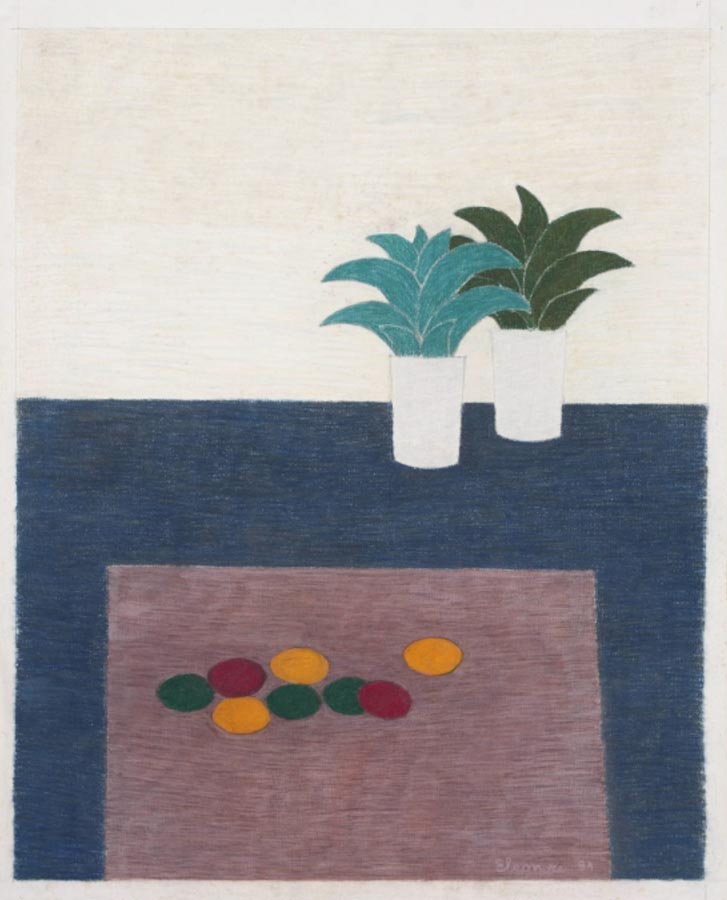 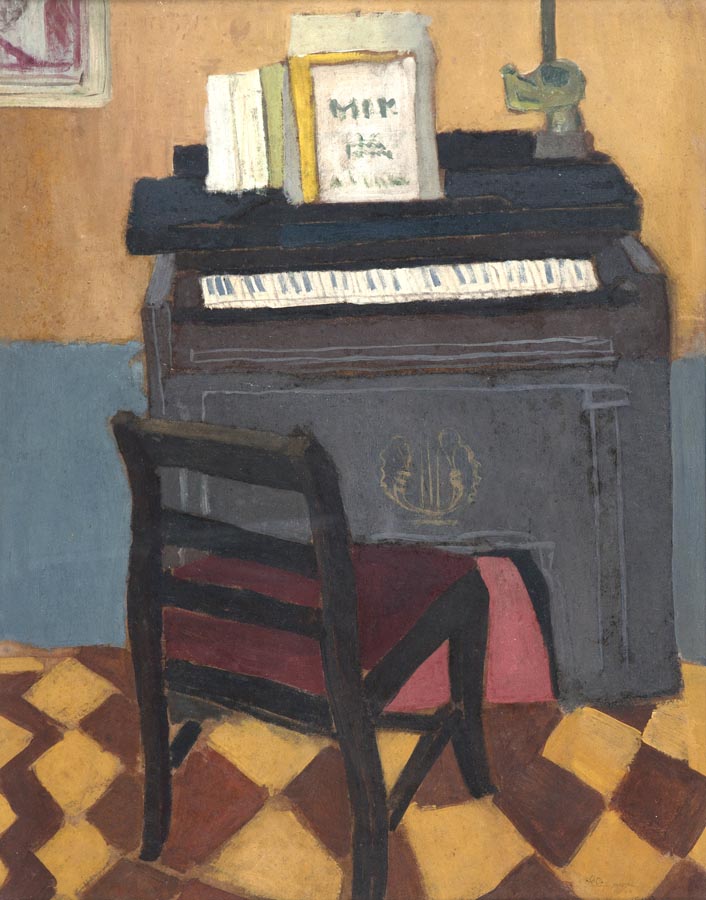 In 1953 MAM / RJ organizes in Petropolis the 1st National Exhibition of Abstract Art, bringing together various abstraction trends in Brazil, the lyrical to geometric, and 1956 Break the group organizes the First National Exhibition of Concrete Art at the MAM / SP, already explicit disagreements within the very concrete movement. Despite being one of the participants in this last show - which also took place in Rio de Janeiro the following year -, Volpi preferred to give up membership in groups or movements, opting for freedom to incorporate into their works plastic elements of various orders. This position can be explained not only by the frescoes produced in the chapel of Our Lady of Fatima in Brasilia, but also for the painting of the decade 1950 presented in this exhibition, in which a humanoid figure angel on a background of green and blue diamonds. This fluidity between figuration and abstraction or between the formal and the informal can also be found in the paintings of the decade 1970, such as “Tapes and Masts”, for example. In this case, the work moves from one another by a rhythmic composition formed by interleaving colors in an irregular geometric mesh.