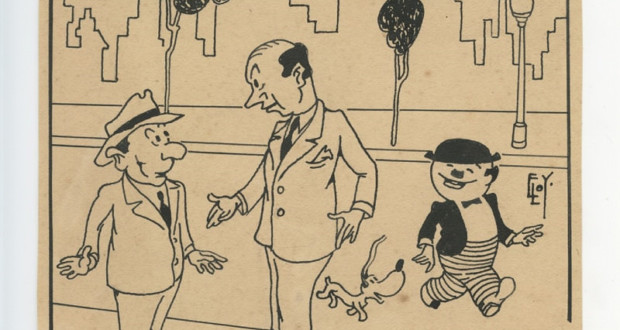 Romário Martins House opens on Friday (8) the exhibition "Alcaeus Chichorro and material culture of journalism in the mid-20 century from". The exhibition brings together reproductions of 127 cartoons in Nanjing on paper authored by cartoonist curitibano Alceu Chichorro (1896-1977).

The material, being presented to the public for the first time, It belongs to the private collection of journalist Saul Lupion Frames, currently guarded by one of her grandchildren. The drawings gathered constitute a stroll through the history of Brazil before the military coup 1964, showing one of the busiest political climate, as the back of Getúlio Vargas to power in 1951, through the creation of Petrobras, Vargas's suicide in August 1954 and the golden years of JK.

The drawings also satirize the adversities faced by Brazilians in General, as the high cost of living, the transformation of industry and national consumption alongside structural issues from the world of politics, the entrenched privileges of those who made up the National Conference and the fight for the vote of the electorate. All this inserted in a broader framework and marked by the legacy of World War II, the cold war, the space race and the decolonization.

The cartoons of Chichorro were one of the main journalistic humor products over a long period. They were part of the daily life of curitibanos uninterrupted between the decades of 1920 and 1960. Creator of the characters Chico Smoke, Dona Marcolina and toto, Chichorro studied drawing with Alfredo Andersen and joined the journalistic universe in 1913. Collaborated in the writing of the paper The Tribune as photojournalist. In the same journal began to publish sonnets and short stories, In addition to start airing of its charges, already adopting the pseudonym Eloy.

After the demise of the newspaper The Tribune, in 1917, Alceu Chichorro joined the wording of The afternoon daily, Gazeta do Povo and of The Day. In the latter, became one of the most ancient and long-lasting, having exercised the function of cartoonist, chronicler, Illustrator and reporter. The exhibition is the result of project approved by edict of the Municipal law of incentive to culture.