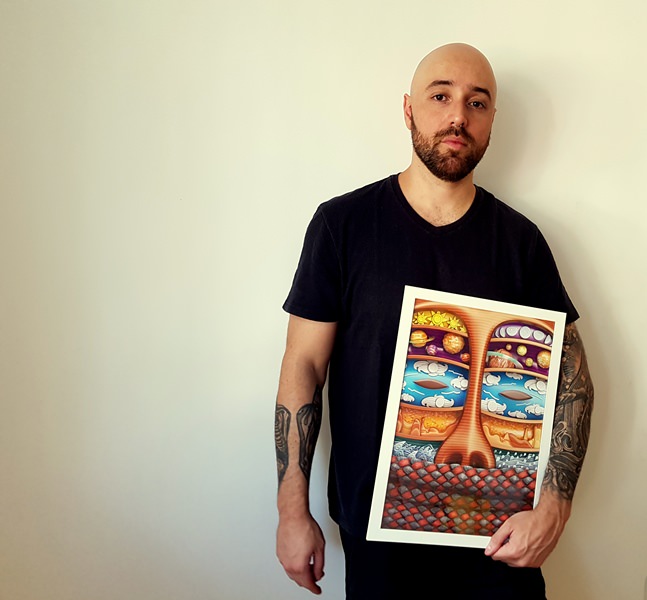 Insomnia, lack of sleep, prolonged and abnormal difficulty to sleep, inability to sleep properly, ahmedabuobaida, insonolência. All these have always been synonymous with an act often unwanted, until the artist Gabriel Bihhel created, in 2013, your self-portrait and also character, Today darling of many – the Insomnia.

After spending years without being able to get a good night's sleep, due to a depression, Gabriel Bihhel, It's fan art, decided to draw a self-portrait, who later became a character, today a success. "When I created the Insomnia, everything changed. I began to see the colored nights, Hence the logic of the colors used in the works of art, very colorful and cheerful ", Bihhel account.

Today, the character's winning body and, the 35 years old, the artist tells us that decided to live on Insomnia. Currently, with 10 works that portray the figure, Gabriel has already held exhibitions in some mining towns and enough this time to Ponteio Lar Shopping, where does the show rooms and also your exposure.

The exhibition will be open to the public from next Tuesday (28/3), parallel to the Show rooms, It will feature a room Insomnia, in homage to the artist and your character, created by interior designers and partners, Junia Ferreira and Paula Missae.

"I never imagined that a drama lived could take me so far! Many of us live with anxieties and fears and we use our own body to get rid of these evils. I started putting in Insomnia all these feelings that they'd bring me and made a happy character. Today, He became the best friend of many fans who purchase my works ", highlights. To Bihhel while exist people with anxiety will exist the Insomnia.

The Shows of the rooms

All art developed for the campaign Rooms show what happens at Ponteio Lar Shopping, from 24 to 07 April has the signature of Gabriel Bihhel, that brings the Insomnia in publicizing the event that honors.

"For me it's a very special moment to be at Ponteio showing my works and still be honored in a show with so many renowned architects and decorators in the market miner", concludes Gabriel.