He made several exhibitions that have earned him several awards and five first prizes in five years of participation in competitions, also exposing abroad. At one time, colleagues commented that his forte was not the picture, and was thereafter, who sought his own path.

Always been present in his artistic thought, that photography allowed him many opportunities, but it was only the first step, a ladder with an indefinite end.

His work went through several stages, but his favorite is scanning, always using as a basis a good photograph. His creations start from the precept that the senses are limited and in special situations and with proper exercises, these senses can be multiplied and expressed in images. [+]… 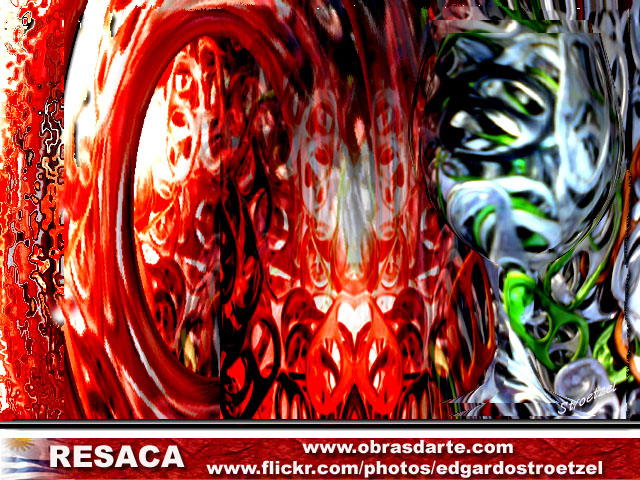 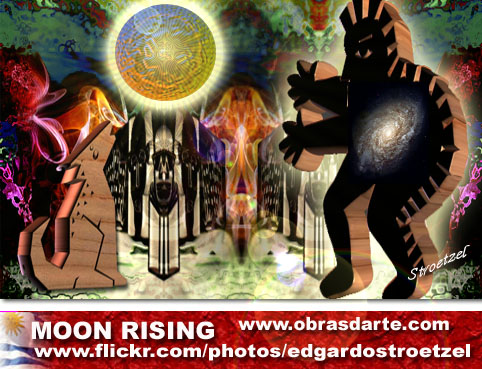 Text that accompanies each work:

Cosmic Flower – In a while, somewhere, without water, no need for air ... flowers and glitter ... Just needs to be herself.

Hangover – Relate objects that express and let us near a situation aware. Imagine the fact without showing the fact itself. A good hangover after an uncontrollable binge.

Varginha II – The extraterrestrial of VARGINHA, a kind of Brazilian ROSWELL. A case, as many, which had no confirmation nor a convincing denial. A case that could give light on a number of doubts and questions. National Security, Religious Concepts, prevent the truth be told. Are we prepared to revelations that shake our structures?

Ison Route – In November 2013 and by january of 2014, the comet ISON may be seen from Earth with naked eye. The prediction, did he make a brightness similar to or greater than the moon itself. Will pass close to the Sun, 2 million kilometers and if it´s core of rock and ice resist the heat of the SUN, we will be presented with a magnificent spectacle. If you do not resist, the image representing the collision of two celestial bodies, shall take effect…

Maya – The arts were very developed in civilization of the MAYAS. The design and chromatography were very marked. Their representations of rites and customs have come faithfully to our days. Usually represent religious imagery and rituals but also celebrates the life and death.

GENESIS – So God said: Let there be light, and there was light. God saw that the light was good and separated from darkness. God put in the name of "Earth", and the waters that were gathered together with the name of "seas". Then it was planted the GARDEN of EDEN.

Stone Giant – Monolithic stone statues only found on Easter Island--has buried body and appear mysterious inscriptions on them. Since 1915 it is known that the MOAIS STATUES have a body of 8 meters below the ground. We are in an antique superior to 15.000 What put us at an event with tsunamis around the last ice age. Why so much hindrance in not recognizing that the ancient civilizations and certain types of deeds are much older than previously thought? Religious motivations?

Submundo Atlante – Few characters of ATLANTE are known today. Once they find the method to recycle air, the netherianos called his reign as SUBMUNDO (UNDERWORLD). Today, is still remembered the progeny of SET, the snake men. The lemurianos attacked Atlantis but, were rejected by the opening of pools of magma, the same as, the pressure volcanic, trashing the first civilization of mankind known.

Precolombino – Is the name given to the American continent prior to the arrival of settlers. Comprises thousands of years and successes as important as the first migrations from Asia where did the first real race ARIA, in northern India. This breed, even going as far today, its existence is not recognized as such. Its members have a slight green tint to your skin.

Inca – Quetzacoatl, Viracocha, the Feathered Serpent. The study of images and the language of ancient civilizations can shine a light on where we came from and also where we're going ... They figured the ATL syllable appears in several names in these civilizations? Yes ... the same ATL of ATLántida.

Occasional Demons – Keep the door closed ... that's what we have to do. On the other side, the demons defeated struggling to get out, they want to do your job. Our lock is firm, powerful and will remain closed. But they are there, waiting for a moment of weakness. Now that we're fighting for.

Moon Rising – Ancient peoples worshipped the Sun and the moon as if they were GODS and not their creations ... these two celestial bodies always remained an important influence on humanity and our survival depends on.

Going For The One – Always, all the time, a door opens and lets us pass to the spirit world but, There's one that only opens once for each person ... and that day is near..

Revelation – The revealing science of God. The attempt is to provide an image that summarizes the religious sentiment. Some religions do not accept the use of images, others, use the influence of spirits in all manifestations. One thing I could prove, the EVIL is closer to the GOOD that all we believe, could say that, almost together. Behind every ANGEL has attempted interference of a demon. Man gets farther and farther away from the temples and closer to GOD. It is very hard to see when the action is the source of one or another. But those who have faith, immediately recognize the participation of each.

Paint and Time – The art, call up paint, photography, digital art, music, theater or its various manifestations, is always evolving. Nobody stands still. This constant evolution answers the time variations. Mistaken who think that only flows forward. The time is not static, our STATE of CONSCIOUSNESS is also not. Somewhere, following the existing parameters, the time doesn't back up ... evolves back. This constant evolution, is that we should take as target, either in one direction or another. The time is curved.

Fair Brazil – This work represents a wish for us all, to have a more just BRAZIL at all levels. One of the dishes of Brasilia has been turned on purpose to set up the image of a scale ... the scales of Justice.

Ascending – The man came over here, the result of the evolution and will continue evolving, will change from home, form, but those who have learned, which have grown, will inhabit another "Blade". Who has not learned, will return to complete his apprenticeship. But one thing is certain, race, whatever your name in future, will continue its existence.

Telekinesia – The field of objects by the mind, far from being a myth, is a reality. The strength of our mind is incalculable. The power to move with spiritual strength, will on the basis of which it is necessary to. Faith acquires a central role to achieve results. Humans have various undiscovered powers, and his knowledge will happen when necessary. An example of acquired power and its consequences, If dates back to the garden of EDEN when Adam and Eve have acquired outside of time, the power to distinguish between good and evil. As a result, The Creator placed a flaming sword above the tree of life to prevent another power, already coded in us, were discovered outside of time and turn us into immortal.

Devouring Joys – He's always there, alert, waiting for our positive manifestations. Is in us avoid that he can ...

Conscience – Various portals between the physical world of the spiritual. To move from one to the other it is necessary to eliminate all physical activity, sleep, leaving only those in operation that keeps the material body alive ... the vital functions. Thus, release the consciousness, spared the laws of physics but she is very independent and creative. There is not a body weight, or wear, or aging, time becomes flexible and can enjoy your creativity. It is the true spiritual life, having to pass at least, once a day to the material world and perform the tasks necessary to keep our physical body so that it will serve as a link between the dimensions.

The Travel to Nowhere – Represents the journey that for centuries mankind has undertaken without knowing the destination. The ubiquitous UNIVERSAL knows where it will end, and our momentum is trust, the EV. Living in the world of dreams and a few hours a day I cross the threshold to MATERIAL WORLD realize where the tasks necessary to keep alive the link. Long ago I did a clean driving definitely nightmares. These boats, humanity travels to a destination already marked, leave behind the portals of the third dimensão and inside the Promised Land.