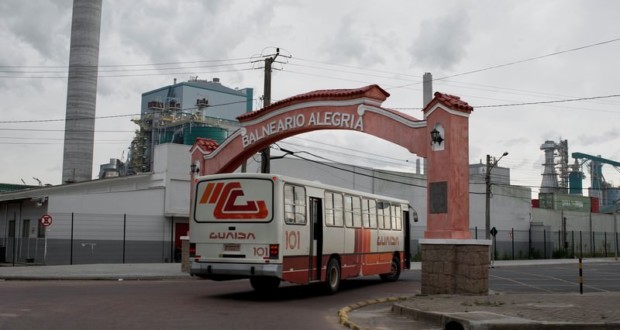 The Studio Gallery is closed the year of 2016 inaugurating the day 25 November, at 7:00 pm exposure Locker Room Joy with 27 photos of the gaucho artist Tiago Coelho. All photos printed on Bond paper 180 g and printed in the roll paper. The frames are in wood of eucalyptus (the same used to make paper). Visitors until the day 4 February. The Studio Gallery is on Avenida Pasteur, 453, Urca (21 2547 4953).

The exhibition Locker Room Joy part of the project developed to World Press Photo Masterclass in collaboration with the Fundación Pedro Meyer, that happened in Mexico City in December 2015.

The small town of Guaíba, in the South of Brazil, is the shores of the Lake of the same name and features 100.000 inhabitants. A sui generis aspect draws attention of the place: a large pulp mill. It's the only pulp mill in the world situated within a city. In almost all the points of this place, We can visualize the iron giant and concrete, with its imposing chimneys. Many argue that the factory, that quadrupled their territorial extension in recent 3 years, contributes in the local economy, but some residents are fighting for better conditions on quality of life in the region, claiming to reduce environmental and social impacts, in particular to the reduction of pollution of air and water, as well as noise pollution hitting heavily some residents neighbors.