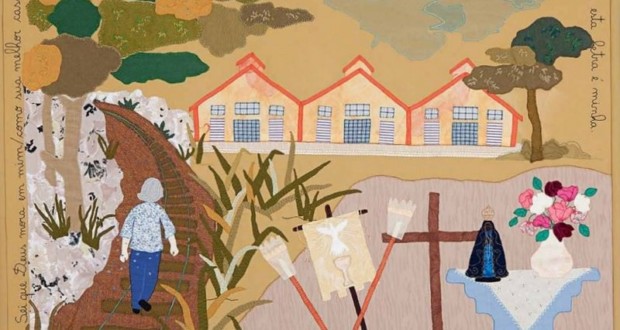 The poetry of Adelia Prado
hit me like a gong,
as a fun.
Joys around a foot of wind,
roughness and side-by-side epiphanies,
performing with a devout fervor.

Add flaps in colors and textures
and, with needles,
give way to the lines of the poem
that's what I managed to do for, finally,
offer my ex-voto. "

Catalog | The exhibition catalogue reproduces 15 from 16 works exhibited, with the poems that the motivated. The photographs are of André Gentleman, and the texts are signed by journalist and humorist Fraga, about clipping tapestry, and the teachers-researchers at the Instituto de Artes da UFRGS Paula Ramos, who writes about the meeting between Dinorá Bohrer Silva and Adelia Prado, and Jeanne Bosak, on the trajectory and poetic work of this last.

Dinorá Bohrer Silva | Born in 1947, in Novo Hamburgo/RS, where he lived until the 20 years. He moved to Porto Alegre and graduated in Librarianship and documentation, working in this area to retire. Started, then, his apprenticeship in the textile area next to the Studio Maria Rita Cultural Paths, where she was a student of Francisca Duarte Dallabona on clipping and Tapestry technique, later, also a teacher. Attended the workshop fiber and Textiles in the workshop Free of Prefeitura Municipal de Porto Alegre and papier mache Dolls and classes in Maria Rita Cultural Paths. Librarian by training, his work as an artist has always been heavily influenced by literature.

Adelia Prado | The daily life, the feminine and the faith. The important mining poet completed 80 years in 2015 and, for decades, delights lovers of poetry, with its lyrical text, sometimes rough, but always powerful. Among the prizes, the Jabuti award (1978), in the poetry category, by The Heart Racing (1978), and the Griffin Poetry Prize (2014), the biggest poetry award in Canada and one of the most important in the world.