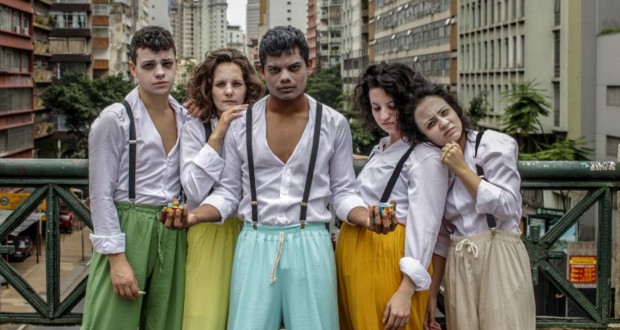 "Do not tell anyone", Collective Pulsating. Photo: Stephane de Sousa.

With text Luan Carvalho and direction of Stephane Sousa, Spectacle Collective Pulsating flirts with Luigi Pirandello and the theater of the absurd of Samuel Beckett, beyond existentialist drama Jean-Paul Sartre

Secrets of common people collected during an urban intervention are the starting point for the drama of "Do not tell anyone", of the collective Pulsating. The play, directed by Stephane Sousa and text Luan Carvalho, debut on 27 March in SP School of Theater and goes on until 27 April, with sessions on Fridays and Mondays, at 9:00 pm, and on Saturdays and Sundays, at 19h.

The show grew out of a collaborative process, in which actors, caused by the director, They faced with the secrets themselves with the anonymous secrets and realize they can reveal symptoms of a society immersed in a social malaise that seems to have no exit, but stuck to an inevitable walk to the end.

The dramaturgy was emerging from the aforementioned intervention, improvisations in rehearsal room and issues such: "What is the social function of these secrets?"And" How these hidden truths can interfere with the individual's relationship with the world?”.

The secret truths shared by anonymous people brought triggers on the anxieties of the personal / social and caused the group followed by an existentialist line, giving voice to the real aspirations of a society that oppresses and alienates the individual.

In the plot, five actors waiting for the arrival of a primary figure for the beginning of the show. They decide, then, break this long wait and begin to move the scenes. "Pending this figure oppressive, they spend the scenes, break to backstage talks and return to the test. This game on / off continues until the end of the test, when they run effectively for the premiere. It's like that here begins codificássemos dramaturgy ", reveals the director Stephane Sousa.

In a game in which the audience knows not right if watching is fiction or reality, now the actors assume their identity, now the characters constructed in a dramatic relationship. And, from these narratives breaks, social issues such as anxiety, moralism, abuse of power, addiction, eating disorders and depression are brought to the fore.

The characters overcome the psychological aspects of the individual, thus comprising, the individual as a social subject. The secrets and questions are not only sensational outpourings of possible real-life stories, but symptoms of a society immersed in a social malaise that seems to have no exit.

"We are supporting us in a surreal process. The drama coming up a bit in the Theater of the Absurd, which is a great influence. We pass by Luigi Pirandello in 'Six Characters in Search of an Author "and by Samuel Beckett in' Waiting for Godot ', beyond existentialist drama 'In the Bedroom', Sartre. It is a contemporary theater assembly, flirting with the dream and reality to discuss universal issues ", adds director.

The scenario supports the redefinition of the actor's body at the scene, exploring subjectivity, using it either as body testimony (depoimental narrative agent), once as dramatic body (Agent built speech) and composite body while still (Chorus agent component). The performative language reappears in the epic breaks, the choreography and the picture compositions that go through the show.

In a game in which you don't know for sure what a dream or reality is, fiction or non fiction, five actors present characters created from real secrets. In a disconnected environment, individuals reflect on issues that lead them to misunderstand their own existence.

Previous: Book brings social issues with the power of words
Next: MAR Music celebrates 7 years of the Rio Art Museum with unprecedented show of singer Siba