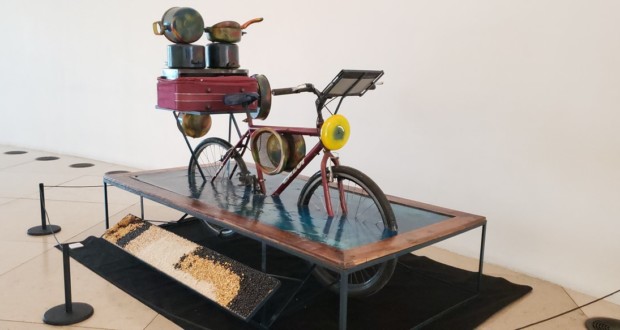 "Load needed for your happiness" debut day 20 of June, Refugee Day, and presents an element as a pillar: à.vélo

wars, disasters caused by cultural phenomena and impacts on local agriculture. There are many factors that move people around the world. What many still do not know is that environmental or climatic causes are also responsible for numerous migratory processes across the planet. The artistic intervention Museum of tomorrow "Load needed for your happiness" invites the visitor to reflect on the situation of people living in climate migrant status or environmental. The work can be granted from the day 20 of June, the World refugee day, and presents an element as a pillar: à.vélo.

Created by Serge which Kiala, plastic artist, refugee from the Democratic Republic of Congo and educator of the Museum of Tomorrow, the bicycle is the main highlight of the artistic intervention, whose idea is to treat the problem of environmental migration as a survival strategy for people who are at extreme risk. "Besides being a means of transport that does not pollute the environment, it does not use fuel, the bicycle is a vehicle for easy hanging and facilitates urban mobility. There is much talk of political problems, economic and religious, but few discuss the environmental or climate tragedy as a reason for migration on the planet ", explains Kiala.

The artistic composition portrays the bike in the water, symbolizing the flooding and the tragedies of nature, with its possible consequences: impaired agriculture, lack of energy, hunger and consequent retreat. "In keeping with the show title, 'Press that is necessary to your happiness', the work also includes basic items for survival of a person: food and hygiene materials, all attached to the vehicle ", says Serge, adding that the handlebars of the bicycle has a tablet to show that without energy there is no communication.

The work will be exhibited in the lobby of the Museum of Tomorrow and may be given from Tuesday to Sunday, das 10h às 18h.

“Load needed for your happiness” It was organized by the Museum of Tomorrow, under the management of the Institute of Development and Management.

A Museum of tomorrow is a museum of applied science that explores the opportunities and challenges that humanity will face in the coming decades from the perspective of sustainability and coexistence. Opened in December 2015 by the city of Rio de Janeiro, Tomorrow Museum is a cultural facility of the Department of Culture of the Municipality of Rio de Janeiro, under management Development and Management Institute (IDG). successful example of partnership between government and the private sector, Tomorrow Museum has received over 3,2 million visitors since opening. With master sponsorship of Banco Santander and a wide network of sponsors that includes companies such as Shell, IBM, IRB-Brasil RE, Engie, Grupo Globo, CCR's Instituto Intel, the museum was originally designed by the Roberto Marinho Foundation.

A IDG - Institute for Development and Management It is a non-profit organization specializing in managing public cultural centers and environmental programs and is also active in consulting for private companies and the implementation or development of cultural and environmental projects. Currently accounts for managing the Museum of Tomorrow, in Rio de Janeiro, Paço do Frevo, in Recife, as operational manager of the Atlantic Forest Fund and as a director of conservation actions and consolidation of the archaeological site of the Valongo wharf, in the port area of ​​Rio de Janeiro. Find out more www.idg.org.br

In 2015, the United Nations (UN) created Agenda 2030 with 17 Sustainable Development Goals (ODS), that must be implemented by all countries of the world to 2030. With the pillars of sustainability and coexistence, Tomorrow Museum is committed to the realization of this agenda, providing for eradicating poverty and hunger; protect the planet from degradation through sustainable consumption and production; ensure prosperous life and personal fulfillment of people through economic progress, social and technological, in harmony with nature; and promote peace. To learn more about each ODS, visit the UN website: nacoesunidas.org/pos2015/agenda2030.