Home / Art / “Jesus, A Reporting "is the first time that the life of Christ is told by investigative journalism 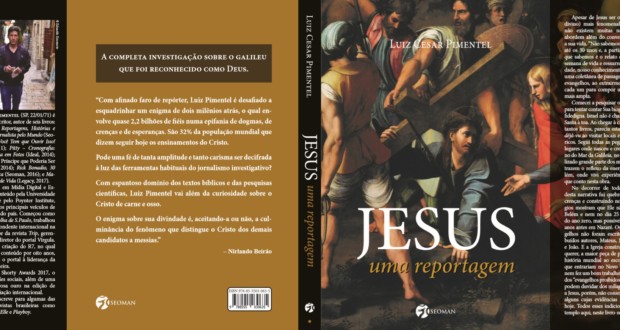 “Jesus, A Reporting "is the first time that the life of Christ is told by investigative journalism

You never see right Jesus in the same way after this book. The story is told there 2.000 years or scientific magnifying glass or the religious is first exposed in investigative reporting format, with approach from all sources, in "Jesus, A Report - full investigation on a common Galilean was recognized God ".

Luiz Pimentel was Israel, immersed in the scriptures that have been approved by the Church and became the New Testament as well as the forbidden gospels, He heard all the scientific sources on the deeds and sayings of Jesus, He addressed the historians and their works about the historical Jesus and reassembles the puzzle about who he really was from all the tiles from the board, and not only the most suitable crop to the church or science.

In the words of journalist Nirlando Beirão, who signs the preface, "With amazing field of biblical texts and scientific research, the journalist goes beyond curiosity about Jesus in the flesh and seeks to understand the whole story ".

Until today, our knowledge ends up being a collection of the four Gospels passages, extracting pieces of each to compose the narrative.

"Throughout the entire trajectory of the book was breaking some beliefs and building new. The evidence shows that he was not born in Bethlehem or on 25 December of the year zero, but possibly four years earlier and Nazareth. That the four gospels were not written by the authors assigned, Matthew, Marcos, Luke and John. The church built means that inadvertently the greatest piece of propaganda in world history when choosing books that enter in the New Testament, and they did a good job of destroying the 'forbidden gospels'. And scientists can doubt the miracles attributed to Jesus, but they can not explain some of the evidence endure today. It is an attempt to portray minimally up to a human being, one of the most hostile and violent periods of mankind, He brought and managed to spread the message of peace and love, and left behind the message, believe or not, His death as a human being and his resurrection as the Son of God shows that everything we have done on earth follows reverberating after what we believe is the final act - the one who baptized death ", says the author.

Excerpt from the book

"We are talking about the most fantastic and phenomenal be (human or divine) History. In all history. A being for which there are about a million buildings constructed, between churches, chapels, basilicas, abadias, temples and cathedrals.

(…)We speak of belief 32% the world's population, in their 40 thousand readings and ways of seeing Christianity. Are 2,2 billion people who follow Jesus Christ. Over 78 million copies of Bibles are produced annually on a planet where the edge of the universe supposedly is, according to science, to 90 billion trillion miles away. If we reduce the space only to our solar system, it was found that this occupies a trillionth of known space. Strengthening the word here a known.

This same earth we inhabit has 6 trillion tons and moves to 106 one thousand km / h around the Sun, where each ray of light takes about eight minutes to achieve the.

Reduce the proportion and think of a grain of sand. Each has 22 QUINTILLION atoms (22 followed by 18 zeros).

Or think of your body, that each 28 days have the whole new skin that is completely renewed every nine years. This body comprising 206 bone and 100 billion neurons.

Put everything on the same scale and see that it is impossible to see everything.

What we can see is the integrity of the stories that others tell us. Here is the purpose of this report. Get as close as possible to the real Jesus, who in the Greek translation of the Hebrew term became known as Christ. "

Specialist in Digital Media and Content Strategy at the University of Berkeley and the Poynter Institute, He has career in the country's main communication vehicles.

It began as a reporter S Sheet. Paulo, He worked as a foreign correspondent in Asia, Trip was editor of, UOL portal manager and director of the portal Virgula. He was director of Myspace in Brazil, and participated in the creation of the Portal R7, where he was director of content for eight years, when the led the Brazilian Internet leadership.

Also writes for some of the main Brazilian magazines such as Rolling Stone, She e Playboy.