The fifty years of activity of dealer, concluded with a group exhibition, also celebrate birthday of an artist 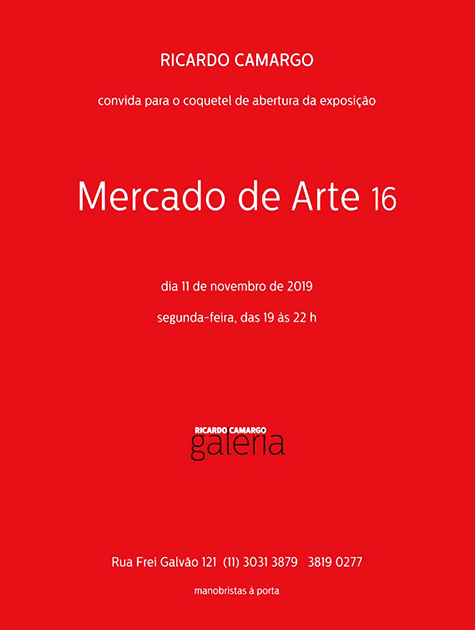 Ricardo Camargo, marchand, with decades of activity in the Brazilian cultural market, celebrates its Golden Jubilee with the 16th edition of the group show Art Market, viewing 60 works of 31 artists and tribute to 120 anniversary of the birth of Vicente do Rego Monteiro.

The gallery owner began operating in the market, concretely, after achieving his first sale to 17 years old. From that moment, and along the 50 years of experience, has partnered with Ralph Camargo, Paulo Figueiredo Filho, José Duarte de Aguiar, Ugo di Pace and was related to people who have become important for Brazilian art, como Pietro Maria Bardi, Volpi, Wesley Duke Lee, Flávio de Carvalho, Among many. One of the features that differentiate the performance of Ricardo Camargo much of the gallery owners is the diversity of styles with which it works. In your resume, included exhibitions with works dating back to the Pre-Columbian Art, through highlighting the modernist and coming to contemporary.

His commitment to the dissemination of culture and its dedication to the art circuit is represented in special project conducted in partnership with Patricia Lee, which conceptualized and inaugurated, in 2015, the Wesley Duke Lee Art Institute, dedicated to preserving the memory and works of the artist.

Among the projects created by the gallery owner is the exhibition "Art Market”. Now in its 16th edition, this group show has a differential: only appears when you can gather, at least, 20 unpublished works or works that are out of the market for more than 30 years. In simultaneous action, gallery owner pays tribute to 120 anniversary of the birth of Vicente Rego Monteiro, with 8 important Brazilian artist works and text Olivio Tavares de Araujo.

All these events do not represent a celebration of past achievements. Available, intelligence and market vision of art Ricardo Camargo, indeed, celebrate the beginning of a new journey - the new 50.

Previous: Book shows how to deal with challenging children
Next: Tomorrow Museum and SEA celebrate the National Culture Day with free admission