Event will provide more than one hundred objects of centuries 16, 17, 18 and 19 for various interests and aspirations collectors, investors, dealers, decorators, museum curators and enthusiastic buyers

The Dutra Auctions take place on the 27 of June, Thursday, from 20:30, the presence Auction 'Sacred Art at Night Single'. Iran shot 111 lots of sculptures, ivories and bones, furniture, paintings and papers, porcelain and faience, silver and metals, carpets and tapestries, glasses and crystals and other objects. The collection features images of several masters, highlighting the sculptor Antonio Francisco Lisboa, the 'Aleijadinho'. There are at least three 'saints of the hollow stick' of his authorship, which are very rare. In addition to the Brazilian pieces also are some Hispanic.

"The works have been carefully chosen by us and are guaranteed for quality, authenticity and state of conservation ", explains auctioneer official, Luiz Fernando Moreira Dutra. Before the event, there will be presentation of the pieces to 26 of June, the 2:00 pm to 8:00 pm, that will be on public display at the Ouro Branco Street, 174, in São Paulo. They are owned by different investors, that is, people incumbent upon another to perform certain negotiations by commissioning.

Among the highlights is Saint Jerome, an image of wood carved, polychrome and dopurada, represented standing the Holy, with slanted eyes and glass, slightly open mouth with teeth, sharp nose, bipartite beard, loose hair, bomb panejamento, bare feet, supported on the basis of the format Morrete. She has 41 cm tall and was sculpted by Aleijadinho century 18, in the State of Minas Gerais.

There are also the same artist, among other items, one Pair of lateral pulleys it is a Finial altar from patinated wooden drawn with traces of gilding, decorated with scrolls. The finial is carved wood in the central medallion format leaked, with scrolls and draping. The dimensions of pulleys are 22 cm x 237 cm high, while the finial has 63 cm x 56,5 cm high. The works are also the century 18 and they were completed in Minas. Including your photos even been reproduced Burning in the book Baroque and syncretic Luso-Afro-Brazilian, Museum Afro Brazil, curated by sculptor Emanoel Araujo. 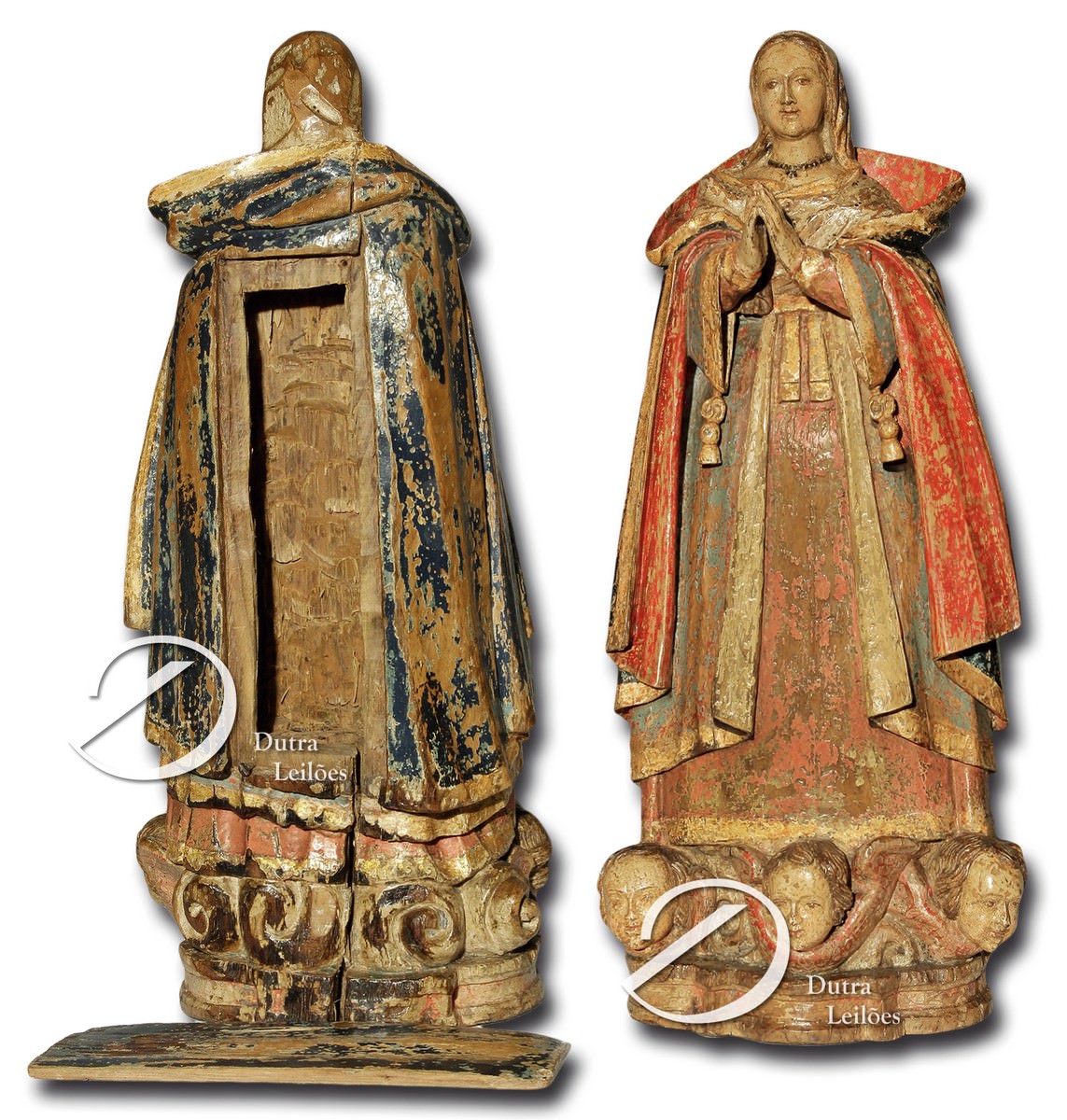 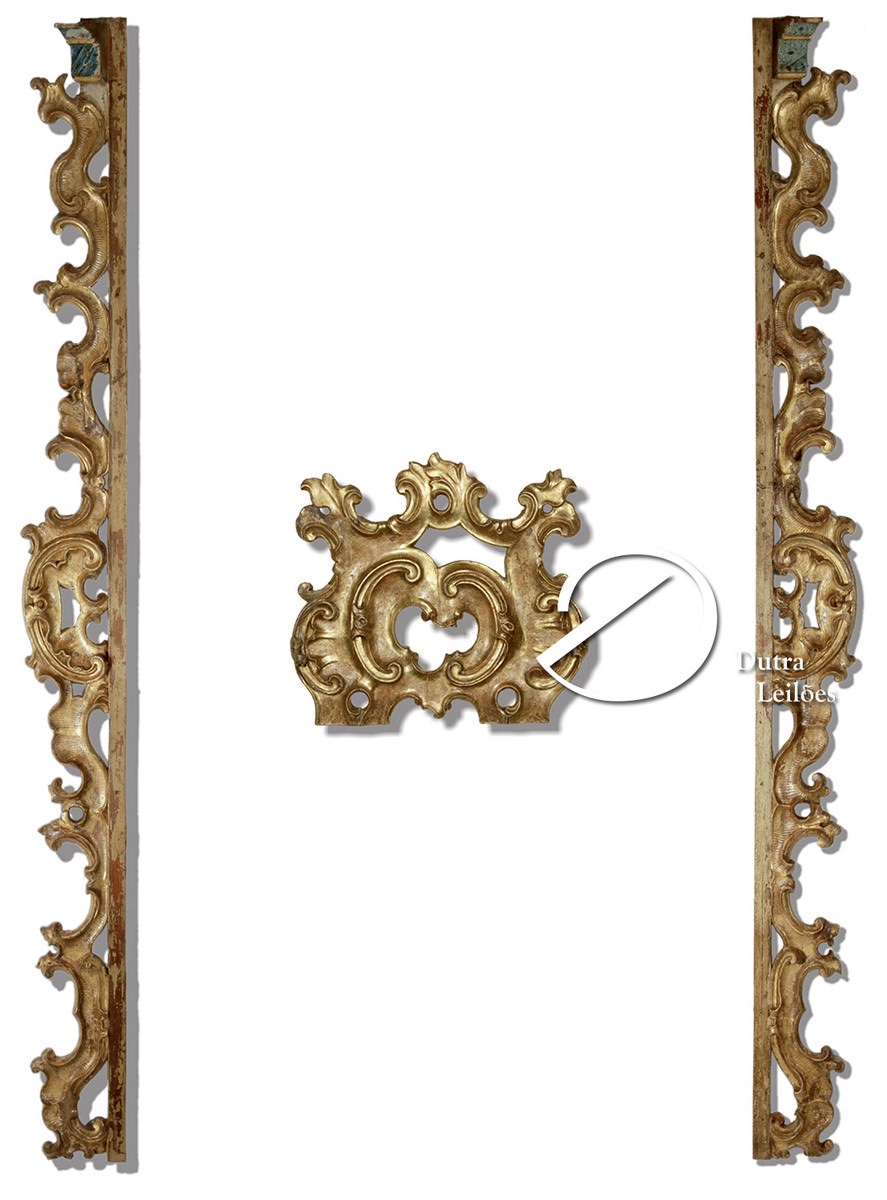 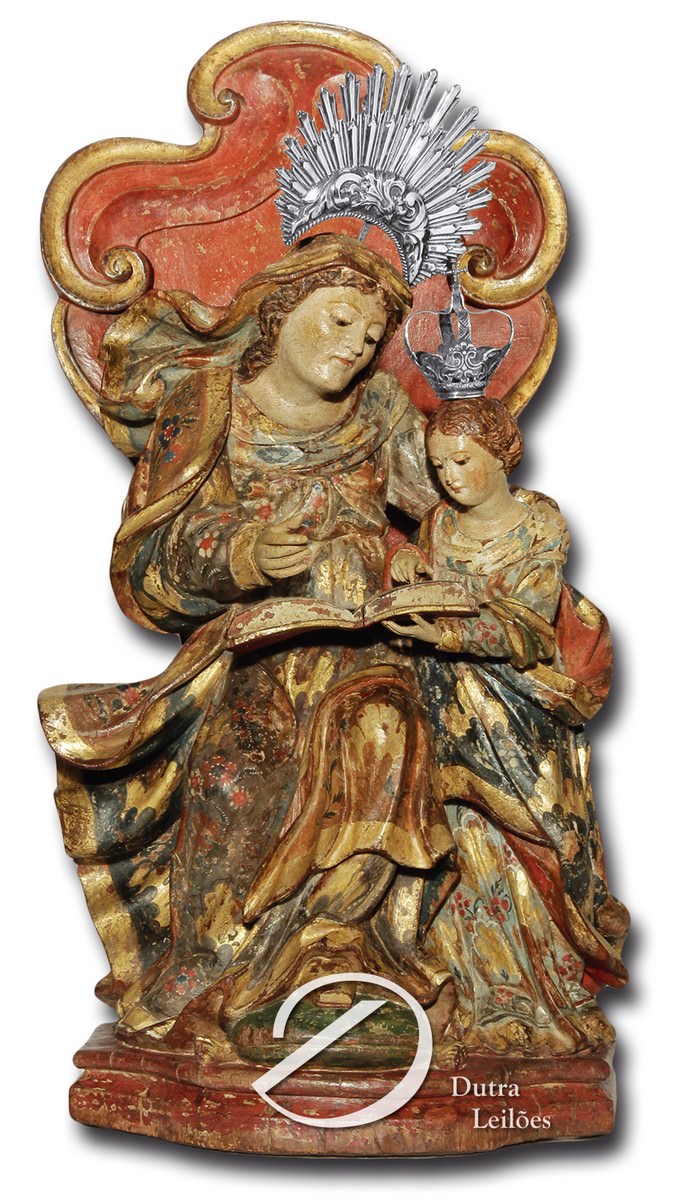 In prominent group there is also the Christ Crucified. It is an ivory image carved out, and monobloc body with embedded arms ivory, representing Christ with lention cloth covering the nakedness. The head is fallen right with crown of thorns, right foot on the left with one stud, supported on wooden cross with ferrules also worked wood and gold metal plate and with the subtitle INRI. The base is in pedestal. The image has 137 cm total height and the Christ has 67 cm high. It is the century 18 and origin Cingalo-Portuguese.

A Holy Pau Oco. Pieta is iWood mage carved policrômica, discrete gilding, representing Jesus Dead Body right, in the arms of the Virgin Mary covered with mantle. It contains sgraffito, bomb panejamento, Leaked based on Purgatory angels, as if they were caryatides. The rear face of the horizontal base plate, removable, closes the clearance. She has 35 cm and was developed in Brazil in the century 18. The piece iscompanhada by a silver crown.

already Santa Pau Oco. Santa Quitéria is an image of wood sculpted and painted, containing sgraffito and discreet gilding. The saint is with hair combed, holding book with his left hand and a palm with his left. It has good draping. On the reverse the retractable vertical plate closing the span. The base is cut and the work has 68 cm high. It was made in Minas Gerais, Also in century 18. 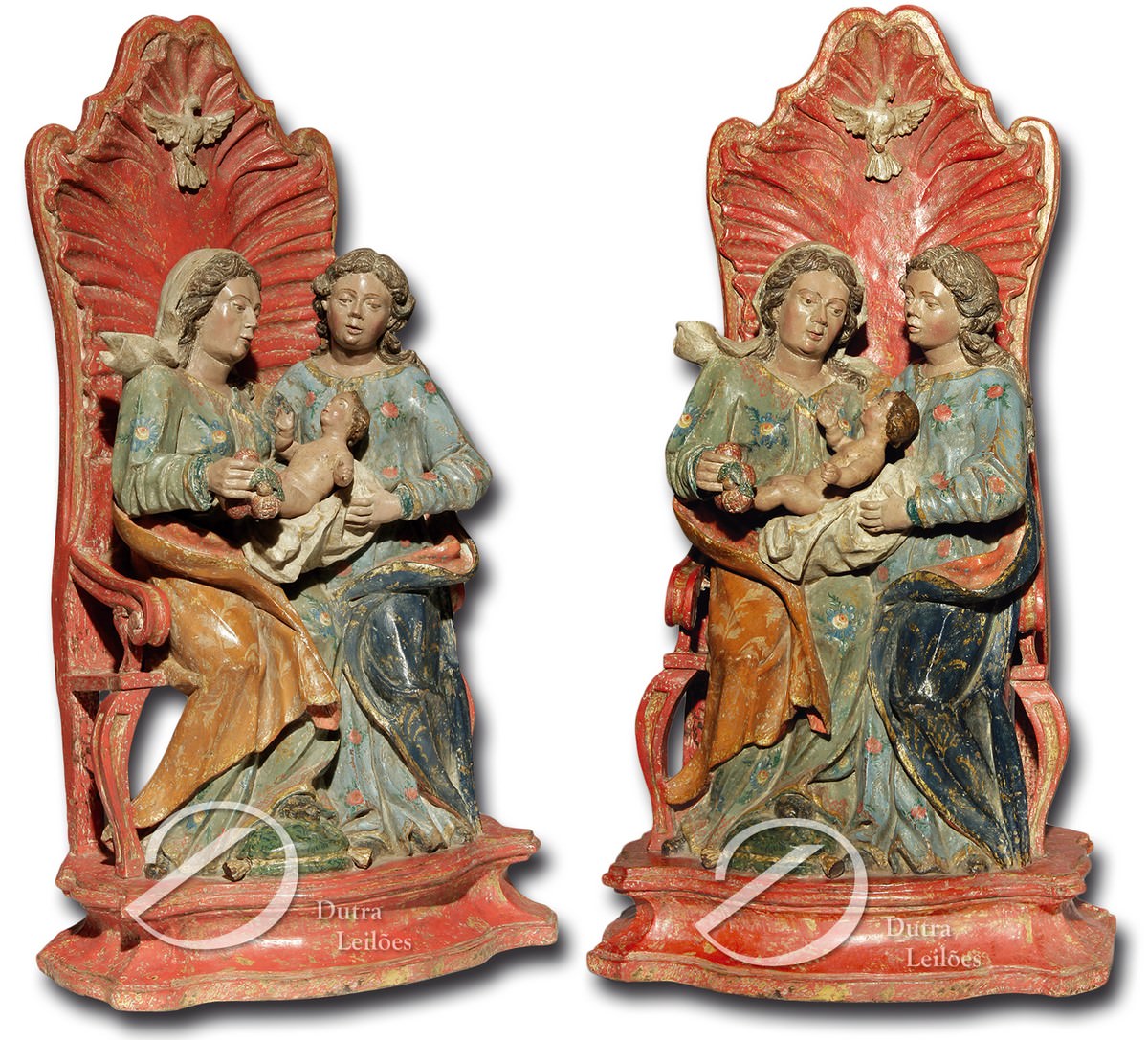 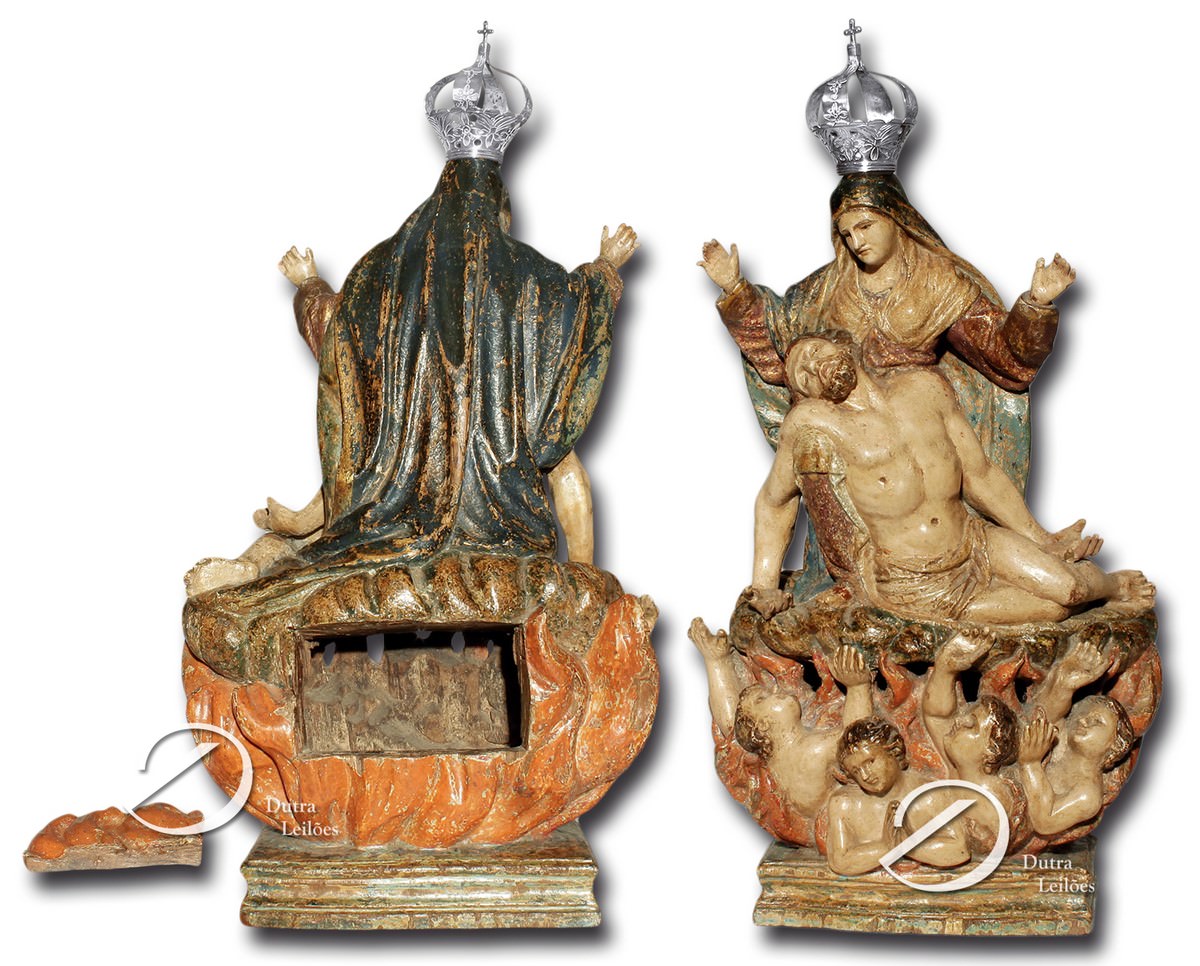 Another Wood image carved significant is the Santa Pau Oco (nº 53) which is polychrome with traces of gilding, representing Santa with hands flat, hair covered with short robe, hooded cloak, supported on three angels and cut rectangular base. On the reverse there is a removable vertical plate, terminating the span. it features 56 cm high, is the century 18 and from Portugal.

It is part of the list yet holy Mothers. The work is a set of wood sculpture polychrome, with traces of gilding, representing Our Lady, St. Anne and the Infant Jesus with flowing hair and hairstyles, and Santana with short robe. It has good draping with sgraffito and flowers in polychrome, sitting in arm chair with cut high-backed garnished by the Holy Spirit. The feet are the show being one over pad and cut rectangular base in steps. Has 60 cm and it was established in Minas Gerais century 18.

The Santana Master is an image of wood carved, with intense polychrome and gilding and remnants of sgraffito, representando Sant'Ana, who sits holding book and embracing Our Lady Girl. She appears with standing hair combed your left with hair covered by short robe, It has good draping, shows the shoe and resting on pad. The backrest is high and indented with scrolls and base trimmed. Has 60 cm and is designed in Bahia, in the century 18. Along the part toFlush companha and silver crown. 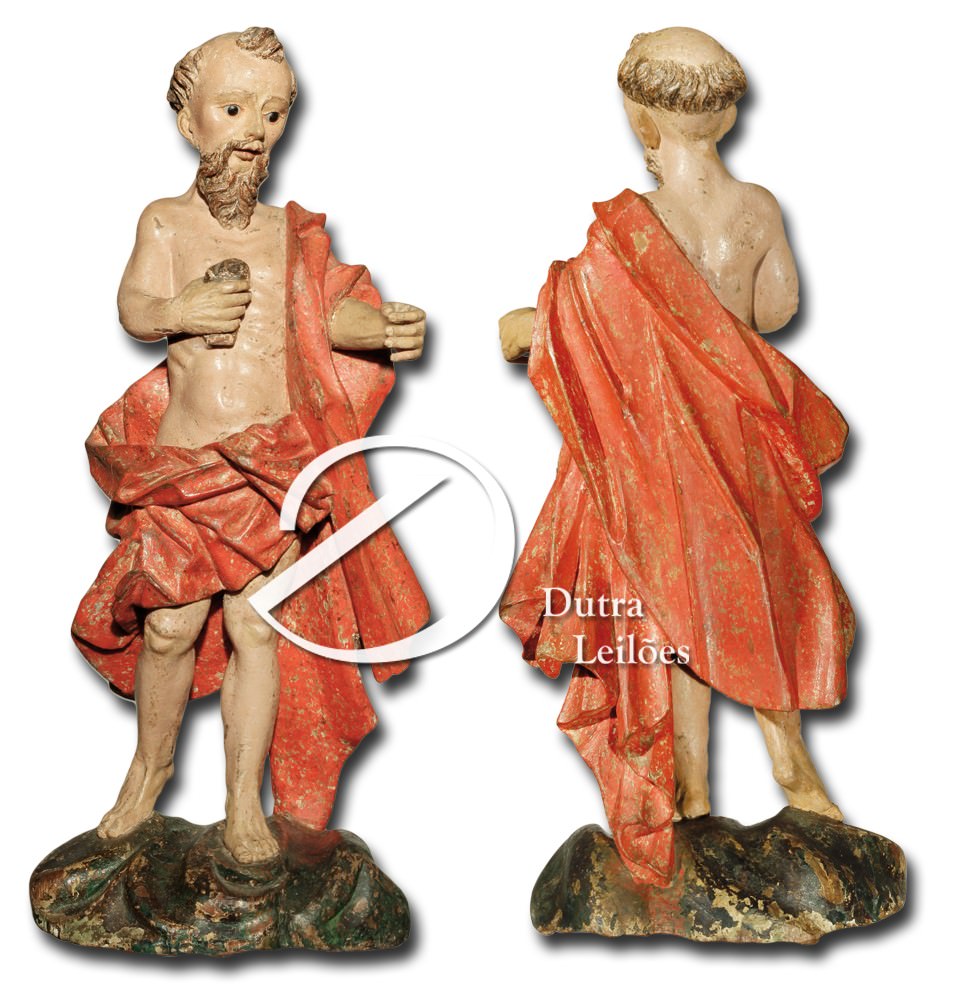 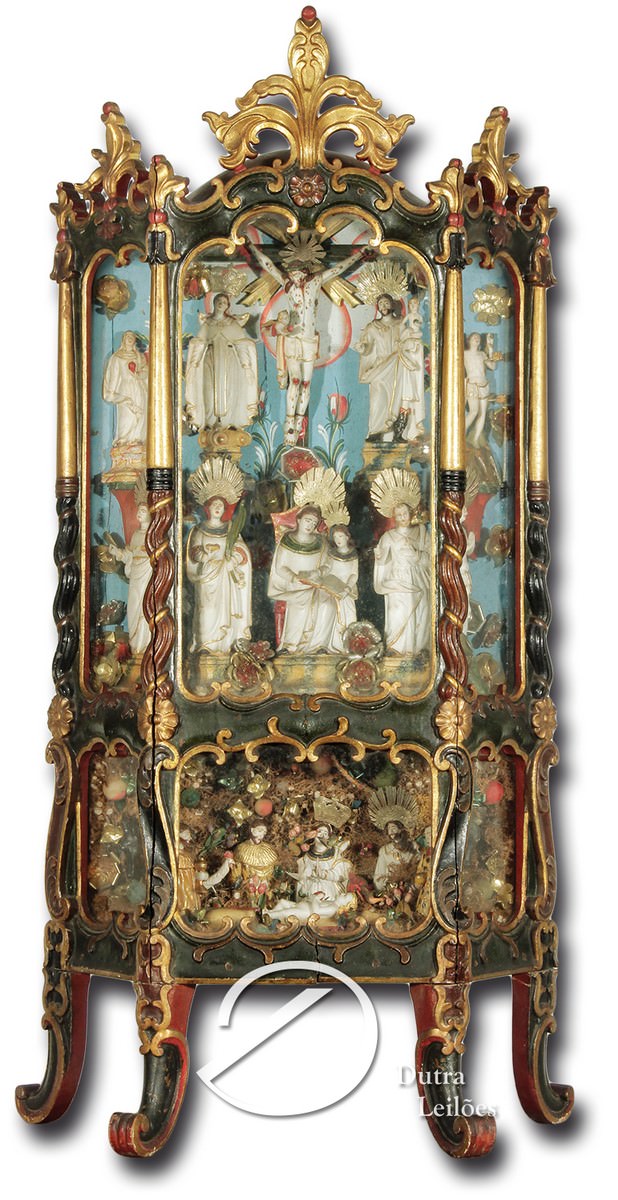 In highlights list is to Dobby or wood Lapinha polychrome with soapstone images. The body is divided into two niches, that being at the top is the Lord Jesus Christ crucified flanked by Santa Gertrudes, Our Lady of Mercy, St. Joseph boots, Saint Sebastian, followed by San Antonio, Santa Luzia, Santana, San Joaquin and San Manuel. All are on small pedestals. In the lower niche there is the nativity scene with the three wise men, the Holy Family, Divino Espírito Santo, a shepherd and animals. The internal and external painting exposes flowers polychrome with a predominance of green and red shades, Burnished gold finished. The furniture is supported on four legs and has cornering 92 cm high. It was produced in Brazil, in the century 19, in Minas.

Finally, the cream of the auction catalog there is silver chandelier drawn back and carved with baroque inspiration, and phytomorphic elements and scrolls in relief. The piece presenta three streams in suspensórias balonet hollow and connected to three small figures cupidos. In the body there is only the mark of the pigtail. The object has 117,5 cm and was made in Brazil, between the centuries 18 and 19.

Under current law in Brazil It is "prohibited the country's output of any traditional arts and crafts works, produced in Brazil until the end of the period monárquico, covering not only paintings, drawings, sculptures, engravings and architectural elements, as well as carving works, imaginary, jewelery, furniture and other arrangements ". These works can only leave the country exhibit with proper authorization from the federal government. This legal status, experts, adds more value to the assets that will be auctioned.

Callers may access the electronic catalog of Dutra Auctions (http://www.dutraleiloes.com.br/2019/l145/abrecat.htm).

Mul.Ti.Plo opens exhibition of the Argentine Juan Melé, one of the pioneers of Concrete Art in Latin America

Spider (Spider) parting of the Rio Art Museum on Sunday

Centro Cultural Banco do Brazil has extensive retrospective of Ivan Serpa, one of the most important artists of Brazil

Windows of the Soul

"Anything you do will be insignificant, but it is very important that you do." Mahatma Gandhi