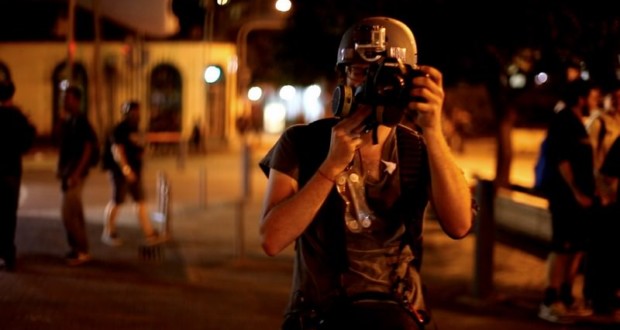 Documentary directors produced by Canal Futura in partnership with Operante mode and
Embaúba dialogue with the audience after the screening at the Federal Justice Cultural Center, at seven

In the same session, The documentary will be shown "March of the White Elephants"
and the director also participates in the debate

"Lift!”, winner of the 5th pitching DOC Future, You will have a special exhibition next Friday, 9 October, the Federal Justice Cultural Center, in the center of Rio de Janeiro. The meeting of the documentary, a production of Canal Futura in partnership with Operante mode and Embaúba Productions, It will be followed by a debate with the directors Susanna Lira and Barney Lankester-Owen and the manager of digital media and content Canal Futura, Deborah Garcia. From the recent phenomenon of the use of new technologies as communication and mobilization tools, the "Lift!"Shows how smartphones, tablets and drones have become the protagonists of social and political movements around the globe.

"Levantes" no Brasil, Mexico, Hong Kong and Gaza Strip were recorded collaboratively and, along 52 minutes, You can follow behind the scenes of actions taken in 2014: the strike coverage Comlurb employees (Municipal Urban Cleaning Company), in Rio de Janeiro, made by Ninja Media, in February; the "revolution of umbrellas", amplified by the records of drones, in the streets of Hong Kong, for the sake of political freedom on the island, in September; the mobilization of millions of Mexicans around the disappearance of 43 students in the region Ayotzinapa, in October; and the disclosure of conflicts in the Gaza Strip by two Palestinian via social networks. Inspired by the documentary, Futura created the application “Lift-se!”, that maps social movements around the world. The app is free and is now available for download at the Apple Store.

In the same session, another documentary will be shown: "A Marcha dos Elefantes". Shot during the protests against the World Cup 2014 in Brazil, the documentary questions the benefits of holding the Cup for the population. Craig Tanner director also participates in the debate.

More information on schedules and exhibition rooms are available at www.festivaldorio.com.br/br/filmes/levante.

The "Lift" won the 5th pitching DOC Future. Since 2010, the pitching Doc. Future calls, every year, Brazilian producers to present documentary that embryonic projects, somehow, human rights related. With this initiative, the Future Search coproduzir documentaries that have an edgier look on these subjects, with good stories. In 2014, "Back", pitching winner 2013, which followed four days in the life of four inmates in Rio de Janeiro during the temporary exit at Christmas, It was a finalist for the International Emmy, after winning several other awards. Coproduzido hair Canal Futura, the film played the first documentary category with Swedish productions, South Korea and the United Kingdom. The film can be watched online at www.futura.org.br/de-volta/. The documentaries have participated, also, festivals within and outside the country. With the television version, from 52 minutes, the productions include an extended version, in feature length format.

Previous: Museum of life promotes activities for the children's day
Next: Suzana Pires participates in Movie Crazy to get married at the Villa Mimosa