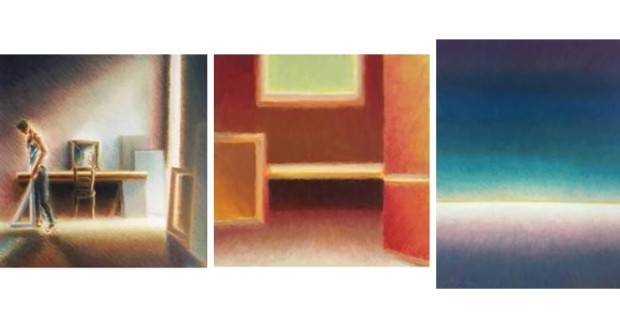 Marcos Duprat presents an overview of his work in more
four decades, in the exhibition "Limits", at the national library

The artist Marcos Duprat Opens the exhibition "Limits"on the day 22 November, in the Cultural Space Eliseu Visconti, at the national library, in Rio de Janeiro. The show brings together 60 works on paper and canvas that discuss the transformations of the artist in his pictorial language of figurative – or the image that describes the visible reality – for the creation of spaces and oneiric and chromatic landscapes. After a period of eight years, his last exhibition in Rio de Janeiro, and a stay of three years in Nepal, Duprat one finds the carioca public that shows that illustrates stages of their maturation and transformation of their plastic language throughout 40 years work.

Among the exhibited works, Some are dated from previous decades as quotations from unfolding from the turn of the century. The recent works feature radical renewal. The light moves as leading and articulation element. The pictorial plan consists of expanding color areas, built by brush strokes with a concentric and radial and rhythm to create surfaces that evoke or configure horizons and chromatic landscapes. The technique of Duprat is the varnish, in the color results from the superposition of layered pigments. On screen the means employed is the oil, While on paper it uses oil, oily pastel, watercolor and pencil.

The show, that was displayed earlier in the MUBE, Brazilian Museum of Sculpture, in São Paulo, comes with the book "Limits/Boundaries", edited in 2015, and new catalog edited by National Library. In the text of presentation of the book, Vera Pedrosa marks the transformation in the work of mark Duprat from the six years of their stay in Japan, from 2000 to 2006, When your painting comes out of the Studio and turns to the description of nature with renewed vigour. Since 2008, Duprat has his studio in Rio de Janeiro, and your personal collection has a large number of paintings, works on paper, drawings, photographs and sculptures.

More information about the artist:

Born in Rio de Janeiro 1944, Marcos Duprat He maintained throughout his life and constant diplomatic the flow of his work. The influences of his artistic training in Rio de Janeiro and in the U.S., as well as later of seven years spent in Europe and nine in Asia, left clear traces in your work. Nevertheless, the visual record is unique and remains consistent. With his artistic training began in the MAM of Rio de Janeiro, continued with the master of fine arts degree in Washington, D. C, where he made his first individual exhibition, in 1977. Held numerous individual exhibitions in Brazil, among which meets mark those at MASP (1979 and 1988), on the MAC (1995), at the Pinacoteca do Estado de São Paulo (2006) and in the MUBE, Brazilian Museum of Sculpture (2015), in São Paulo. In Rio de Janeiro highlight shows at Centro Cultural Correios (1995 and 2008), the Cultural Institute Villa Maurina (1996) and in the CCBB (1999). Abroad also numerous exhibitions in museums, among which the Centro Culturale San Fedele, in Milan (1990), the National Museum of Hungary (1993), the Museo de Arte Contemporaneo de Montevideo (1999), the Metropolitan Teien Art Museum, in Tokyo (2003), and the Sidhartha Art Foundation in Kathmandu (2013). He exhibited in galleries in Brazil and abroad and his works are in the collections of the above related institutions, as well as in private collections.